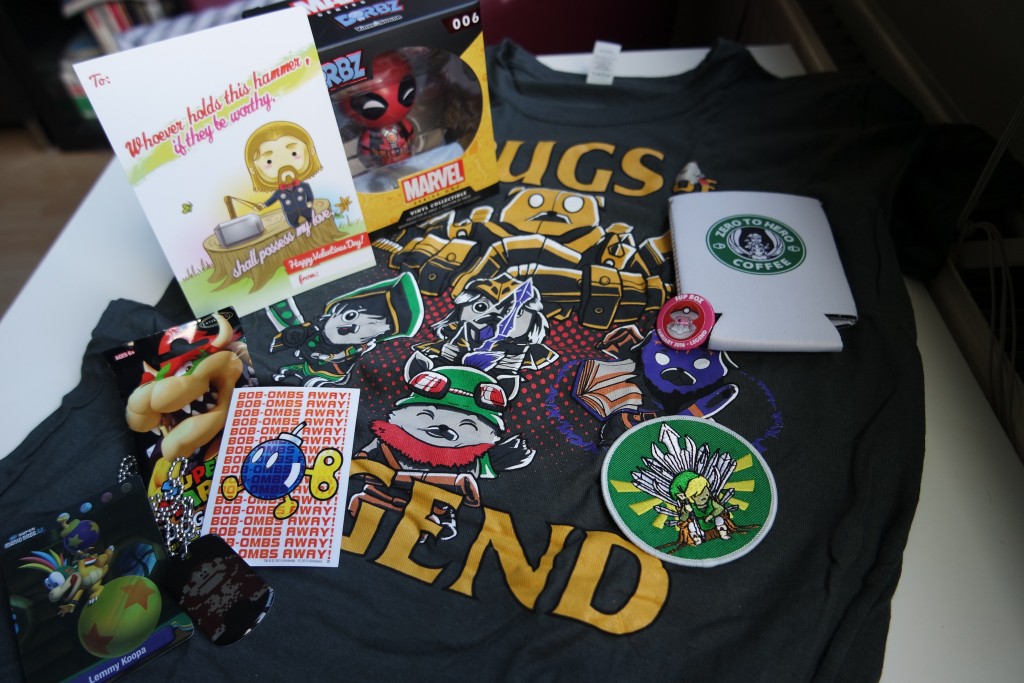 After a few months of having the Girl Gamer Monthly Subscription Box, I was curious about other videogames related subscription boxes. I stumbled upon the 1Up Box, a monthly box that offers gear for Geeks & Gamers, with a $40+ value, a monthly exclusive T-shirt and having 6-8 items to each box. The previous boxes looked promising, so I ordered my very first 1Up Box. The theme of the 1Up Box January 2016 is “Legend”. 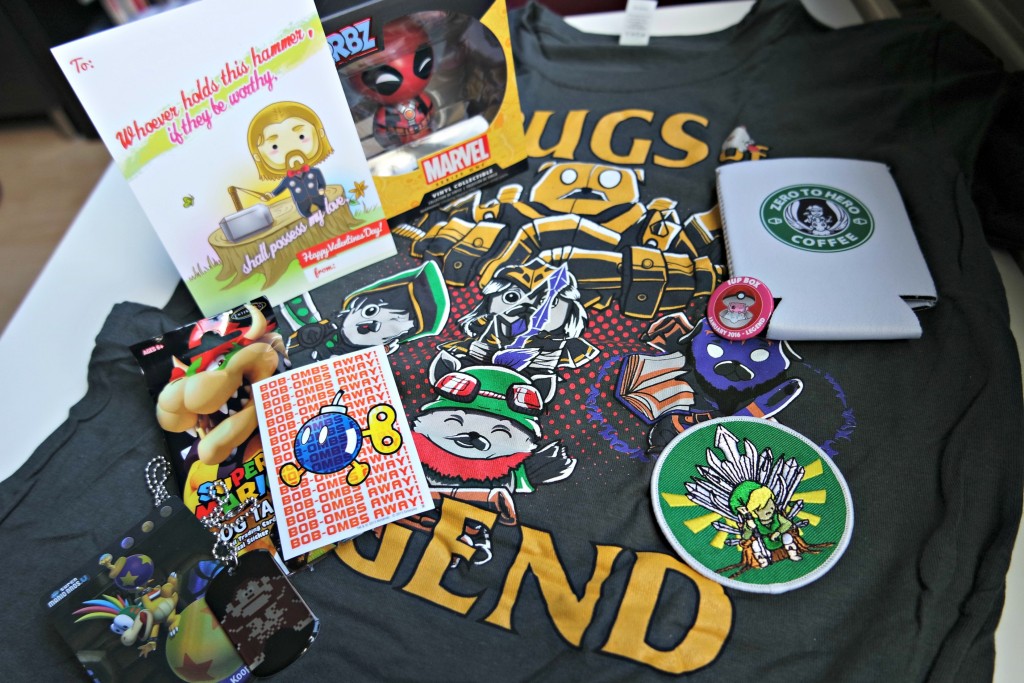 The 1Up Box of January 2016 contains 6 items. Half of them are Videogames related (in my opinion) and the other half is more geek related. I chose the 1Up Subscription Box because I felt like this box would have more Gamer related items than Geek stuff (e.g. comics, movies and superheroes) compared to other Geek & Gamer related subscription boxes. I was a bit disappointed to see that the ratio Geek/Gamer was 50/50, but it does make sense looking back at the past boxes. Anyways, let’s go and take a look at the items themselves. 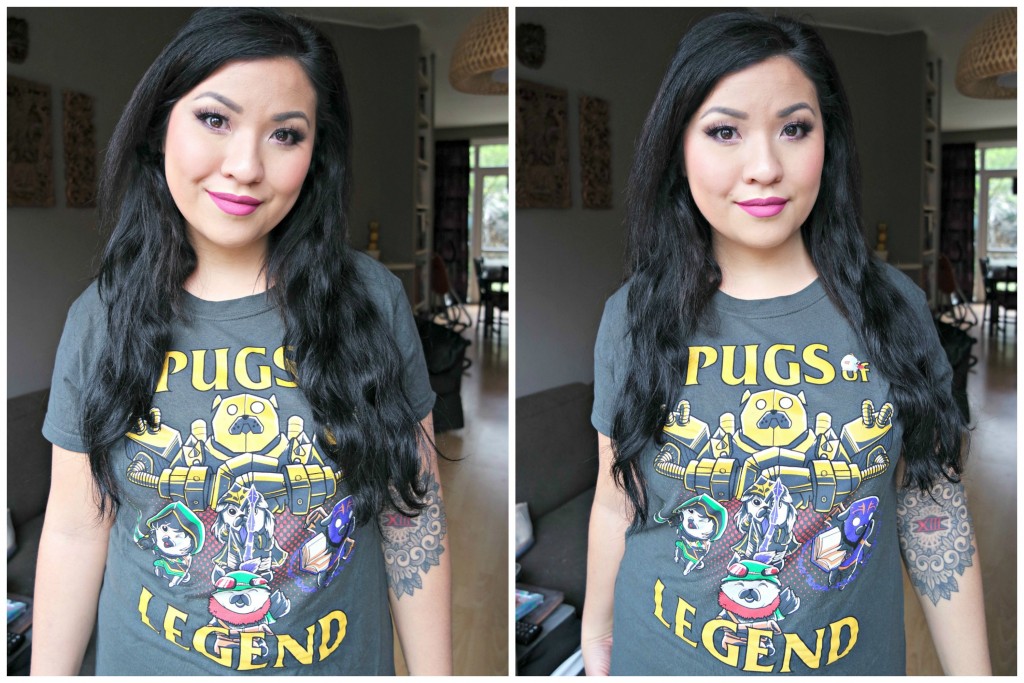 Let’s talk about the T-shirt first! Each month contains a 1Up Box Exclusive T-shirt. When subscribing to this box, you can pick a size fitting men or women with sizes from S to XXL. You can also order a “Youth” fitting T-shirt from XS to XL. I’ve ordered a Womens XL T-Shirt, because I like loose fitting T-shirts. I have a European M size fit for tops.

The T-Shirt is themed Pugs of Legend, I’m not familiar with the videogame, but I guess this artwork is inspired by the popular League of Legends Videogame, only having cute Pugs instead of having the regular characters. Can’t say anything else about this though, but I’m definitely sure that a lot of gamers would be happy to receive this T-shirt. 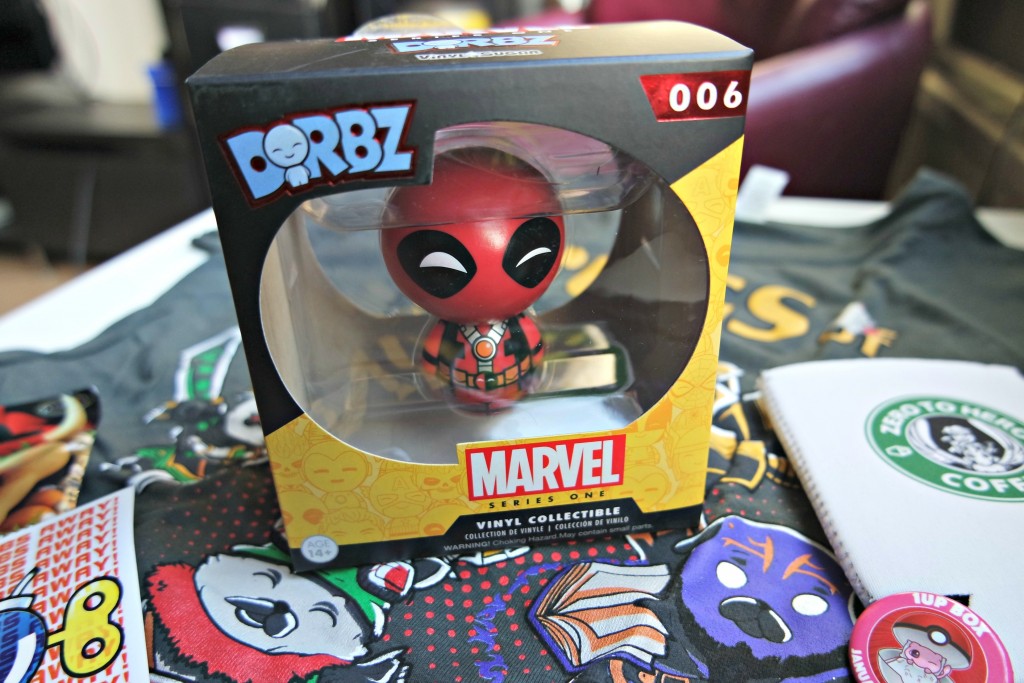 Next up is the Deadpool Dorbz. This is a Vinyl Collectible Figurine that looks very. very adorable. This Dorbz is from the Marvel (series one), which has 12 collectible figures in its collection with Marvel Characters like Spiderman, Wolverene and Captain America. These collectible Vinyl Figures are extremely popular at the moment, especially those from Pop!. This is my very first one. I never heard of Deadpool before they made the upcoming movie, but the character sounds hilarious so I’m very curious about the movie, definitely going to watch it in theaters soon! 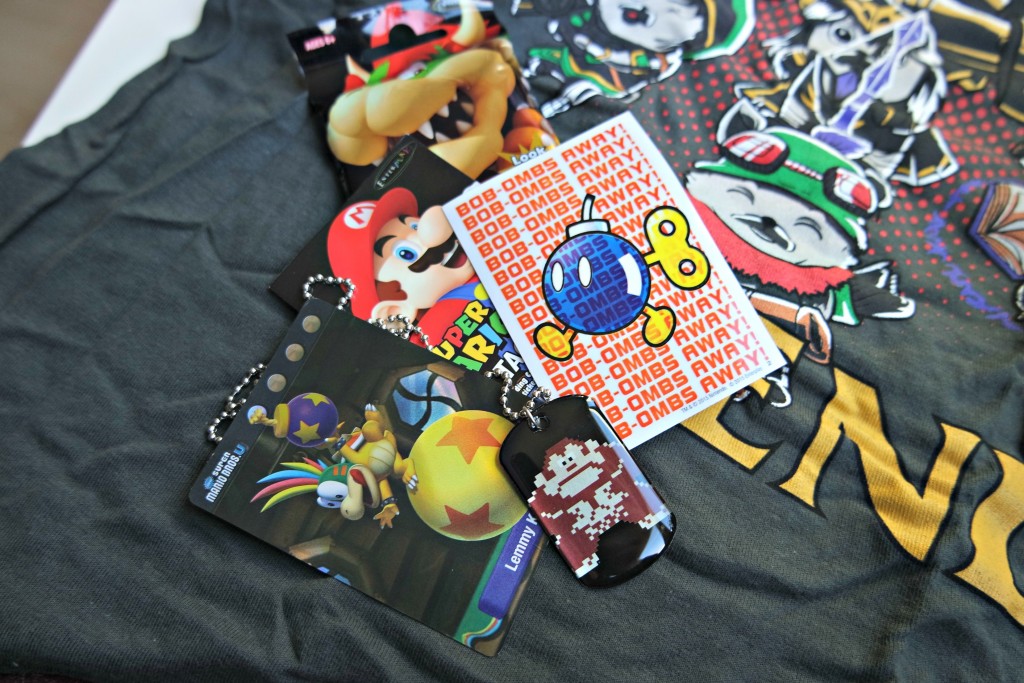 The following item is a 3-in-1! This is the Super Mario Dog Tag pack. Each of these packs contains a Dog Tag with Epoxy Finish attached to a 24 inch (~61 cm) ball chain necklace, a Foil Trading Card and a Decal Sticker. There are 30 Tags, 27 Foil Cards and 12 Stickers in total to collect. I loooove my Tag, I was hoping for either the Retro Mario or Donkey Kong Tag and got DK! I seriously was addicted to the Donkey Kong Gameboy game for a long time. I loved solving those levels and how each world changed themes. I’ve also got the Lemmy Koopa (which first appeared in Super Mario 3) Foil Card and the BOB-OMBS AWAY! Sticker. I always think that Mario world enemies are extremely cute, so I’m thinking how I can make use of these things. 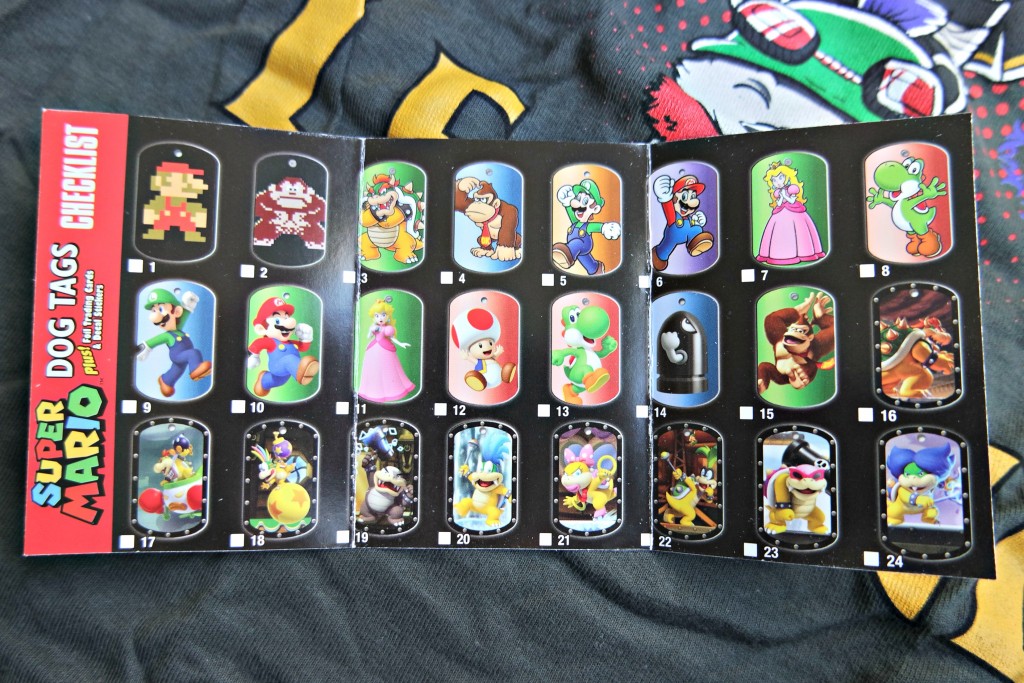 Zero to Hero Can Cooler 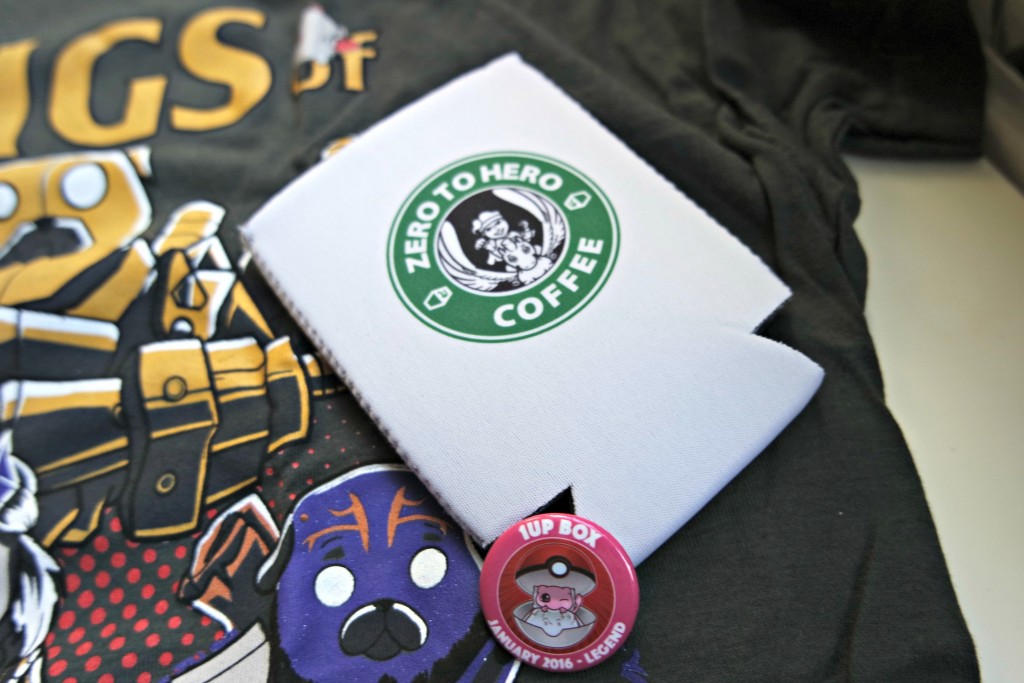 The Zero To Hero Can Cooler is an item that you can use to isolate warm or cold drinks. It looks like the Starbucks logo but is has Hercules on Pegasus instead. I just don’t know about this thing.. I think it’s too small to fit a Coca Cola sized can, maybe a Red Bull can, that’s the best way to describe the size. I just don’t know why you would need this thing, it probably doesn’t fit a Starbucks cup to keep it warm, and Hercules themed things? Just a big nope on everything. I do like the collectible 1Up Box January Pin that is also featured in this picture, it has a Mew on it, yaay for Pokémon! 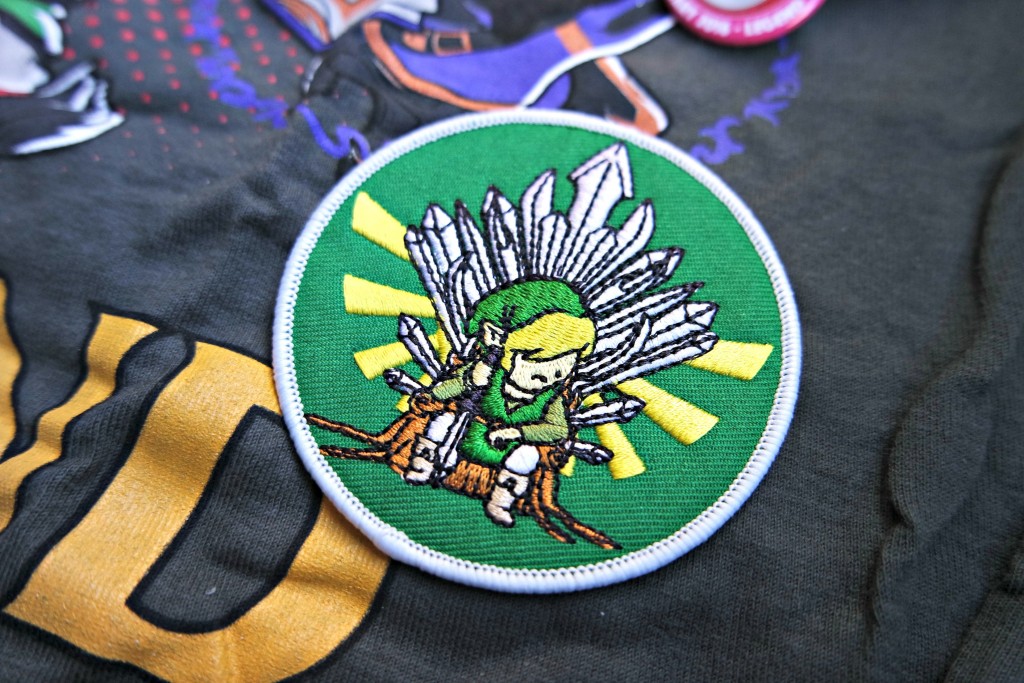 The fifth item is the Game of Legend Patch. It has Link from The Legend of Zelda sitting on the Iron Throne of Game of Thrones. A very cool fusion of the serie and game, I like them both, especially The Legend of Zelda games! Very curious how Game of Thrones TV series will continue, since the story has progressed further than the book. I think there’s a sticker on the back of the patch, so it can be applied on surfaces like for example, a jacket or backpack. 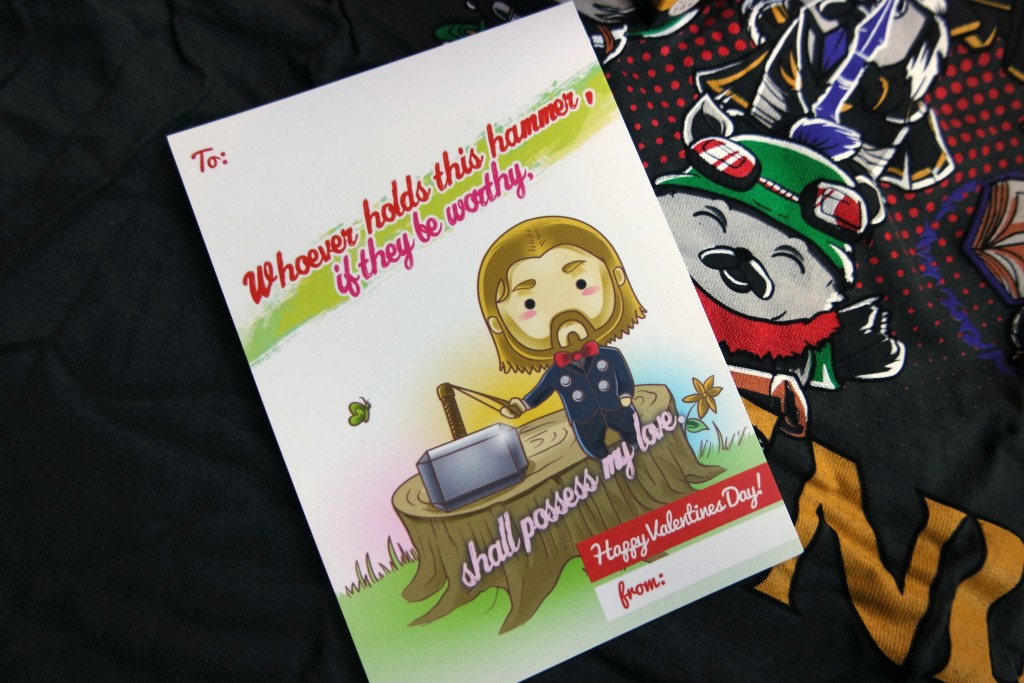 The last item is a Valentines Day Card with Thor and his hammer, which reads “Whoever holds this hammer, if they be worthy, shall possess my love”. Looks cute, but don’t really understand it.. Thor holds the hammer (and I think he is the only one who can hold it) so he is the only one who possesses his own love? Mehh.. again not something that is my cup of tea, but I’m sure I can make someone happy giving this card, it’s the thought that counts right? 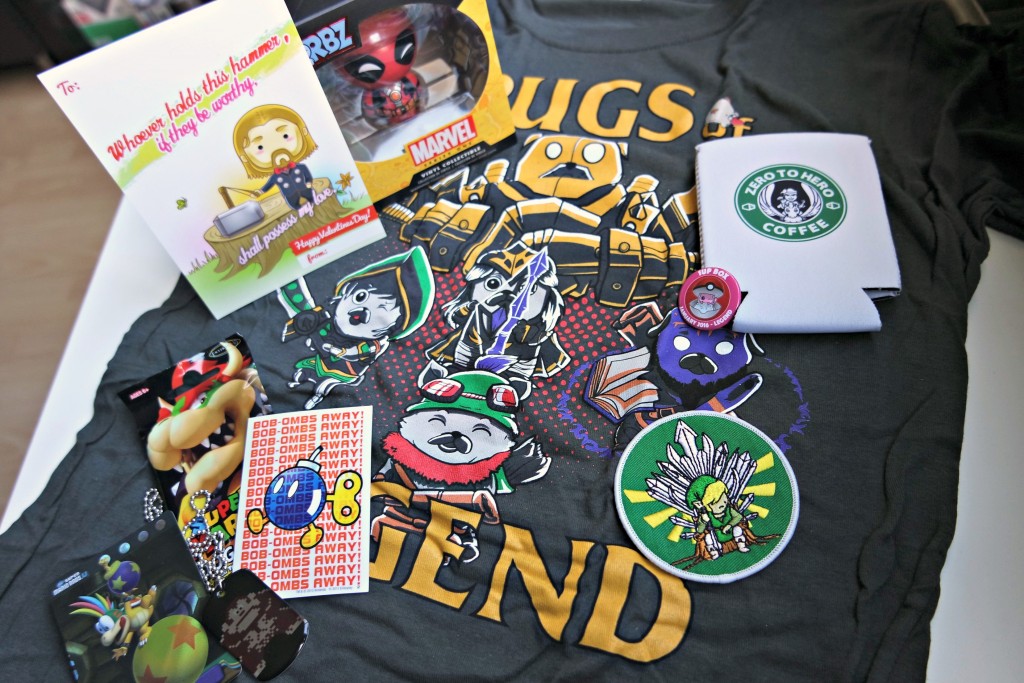 The 1Up Box January 2016 was a huge disappointment for me. I do think the value is what they promise, but the items in this months box were just not that interesting to me. My favorite thing in this box was the Super Mario Dog Tag. I think this box is great if you are into more Geeky stuff besides Videogames, but for me it’s not that exciting. I’m willing to give this box another chance though, since the theme of the Februari 2016 box is Transform, which will include a Kirby item!

The 1Up Box is available for $29.95 USD (price including shipping to the Netherlands, check Xe.com for the current converted price in Euro) at 1Upbox.com. You can only pay by creditcard. The price per box per month is less if you subscribe for a 3 or 6 months plan.

Do you think that the 1Up Box would be interesting for you? What was your favorite item?