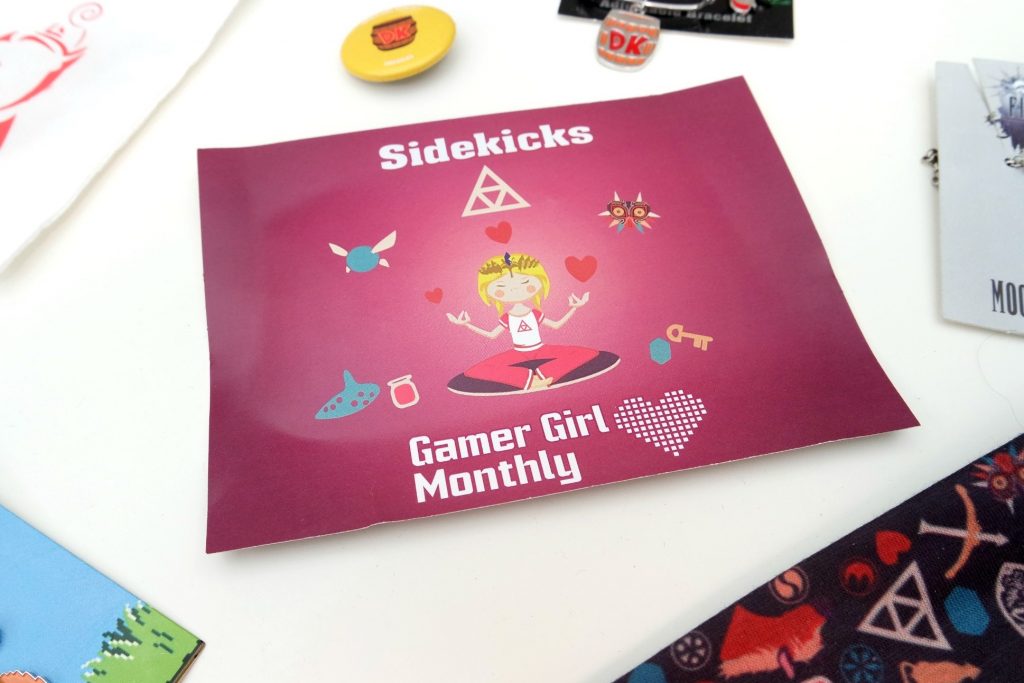 Hey everyone! I have re-subscribed to the Gamer Girl Monthly Box, which offers video game inspired jewelry and other collectibles. Last time was about a year ago, and I thought it would be nice to look into this box again. This box that I’m going to show you is from September. I wasn’t able to show you this quicker because I’ve been so busy with other posts. The theme of this box is “Sidekicks”. I’m going to unbox and show you all the items of the Gamer Girl Monthly September 2016 Box. 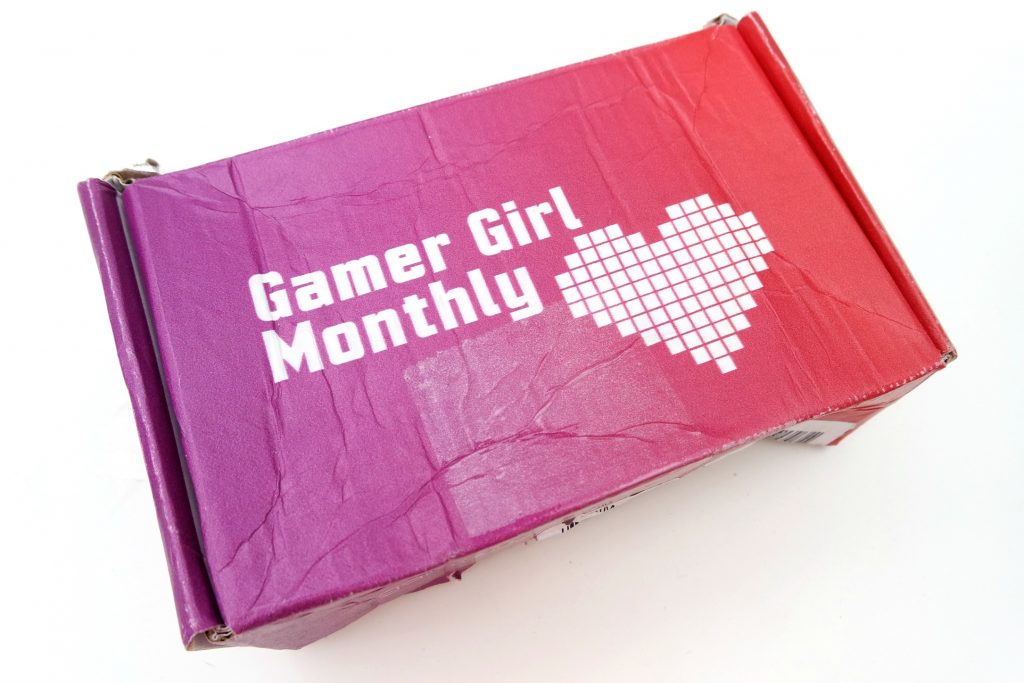 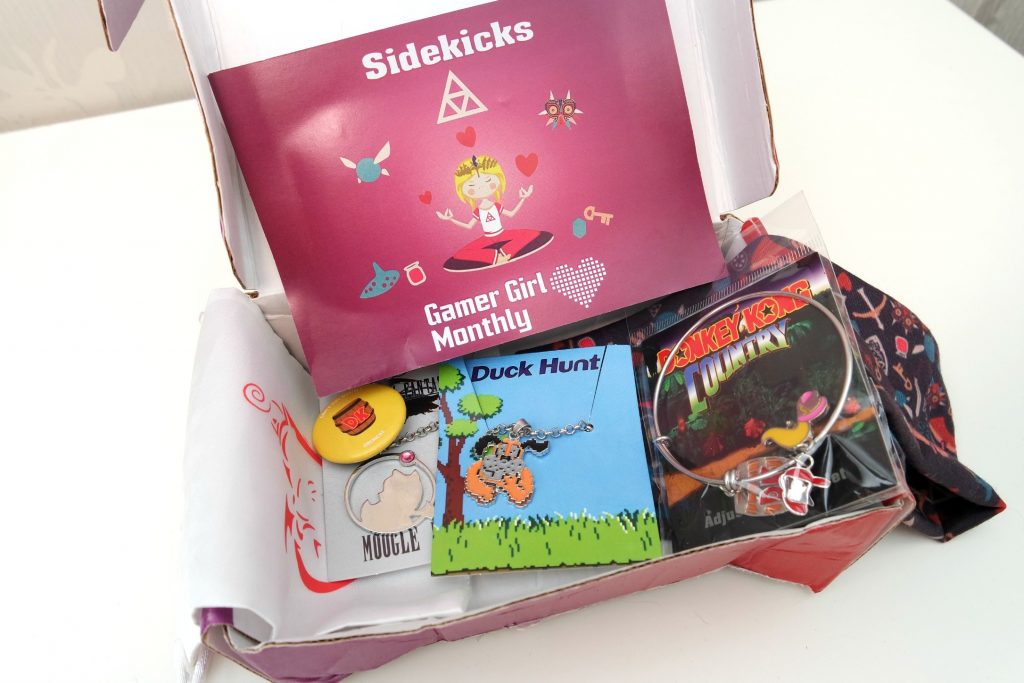 The Gamer Girl Monthly Box has changed over time. If you look at my previous unboxings, you can see that the box is red and bigger. Now, the box has an ombré from violet to red with the same logo. The box is a lot smaller, I don’t know if the box is different for each month now but I might know soon since I’m going to receive another one for the month of November. My box looks kind of beat down, since it was jammed in my letter box (which was very annoying of the deliveryman to do so). 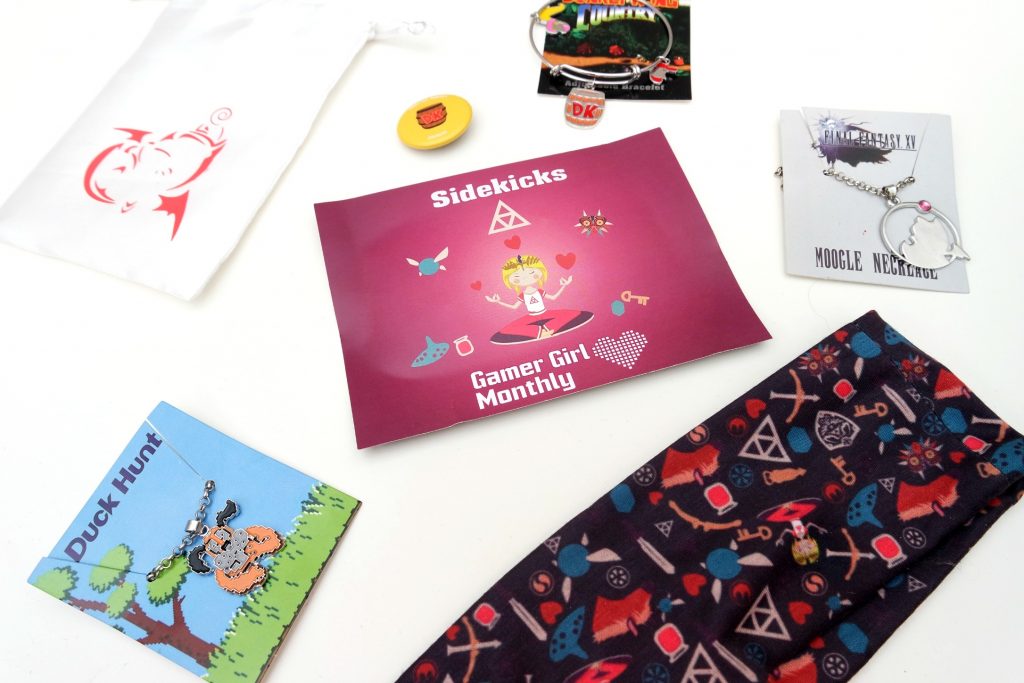 The Gamer Girl Monthly September 2016 Box contains four items if you do not count the pouch. The videogame themes that are featured this month are The Legend of Zelda, Final Fantasy XV, Donkey Kong Country II and Duck Hunt. 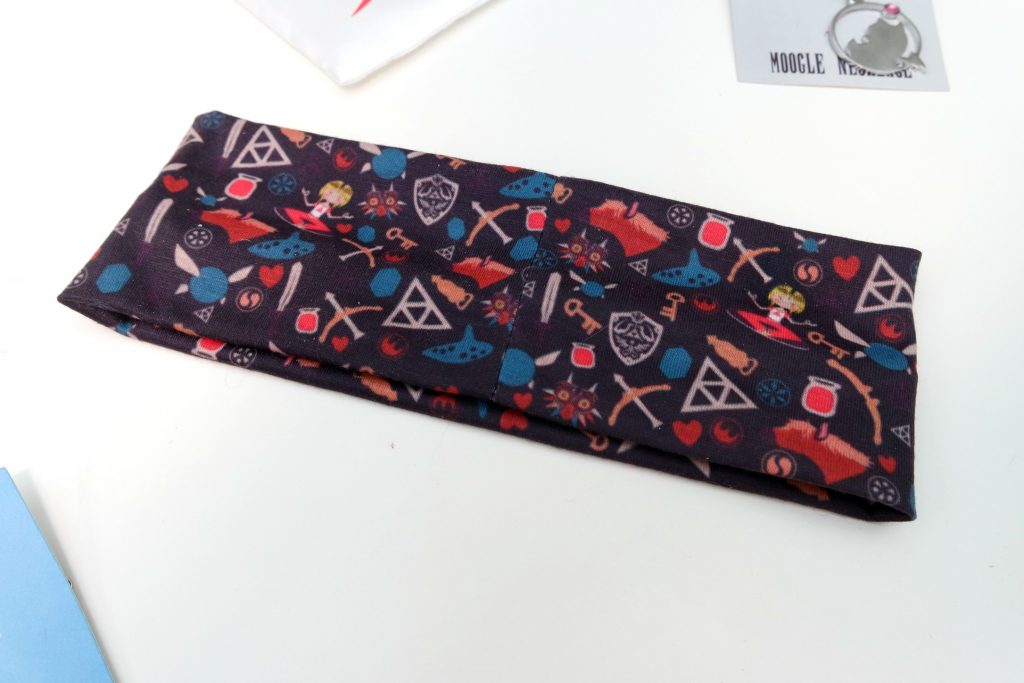 The first item in the box is a Zelda Headband. The headband has a dark grey background, full of different Zelda themed icons, like the Triforce, Rupees, Majora’s mask, Navi and Zelda doing Yoga among many other things. Looking at the description on the card, you can use this as a sweat band over your forehead when exercising. Putting it around my head feels very uncomfortable because it is extremely tight. I have a rather large head but still, the headband is quite wide and even I would feel very weird wearing this. I would rather use this has a headband over my hair, but it’s too wide to do so. I can use it by making it a bit narrower, but you can’t really see the icons any longer when wearing it like this. So unfortunately, this item is not really something for me. 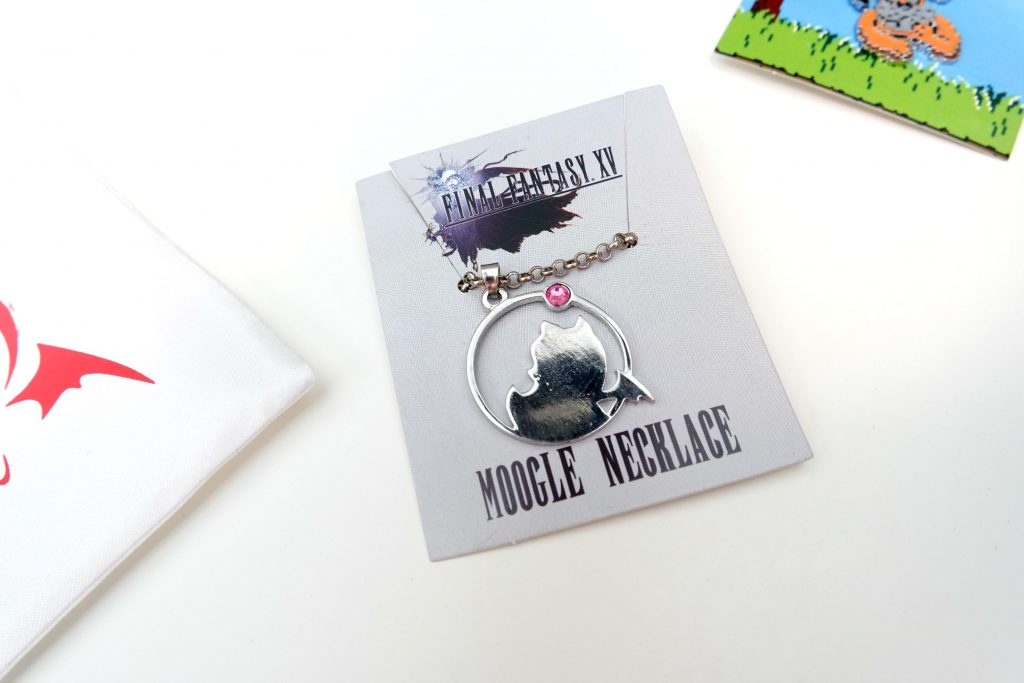 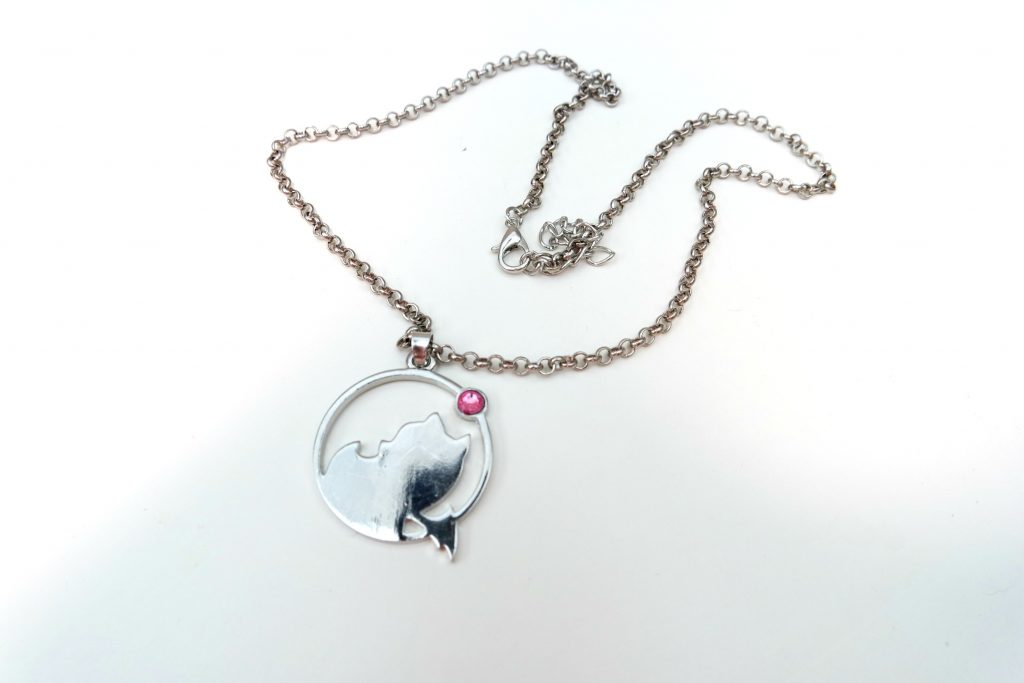 The second item in the Gamer Girl Monthly September 2016 Box is a Moogle Necklace. This necklace is made of (stainless steel?) metal and has a short cable chain. The necklace shows a silhouette of a Moogle, sitting in a circle which has a pink rhinestone. It’s funny that the necklace is (probably unofficial) Final Fantasy XV merchandise, since the game isn’t even out yet! I don’t know if I like the necklace, I do love Final Fantasy but the Moogle isn’t as clear cut as I would like and also one-sided. It looks a bit cheap because of that. I definitely don’t like the short chain. Thankfully, you can remove the pendant and change the chain if you’d like. 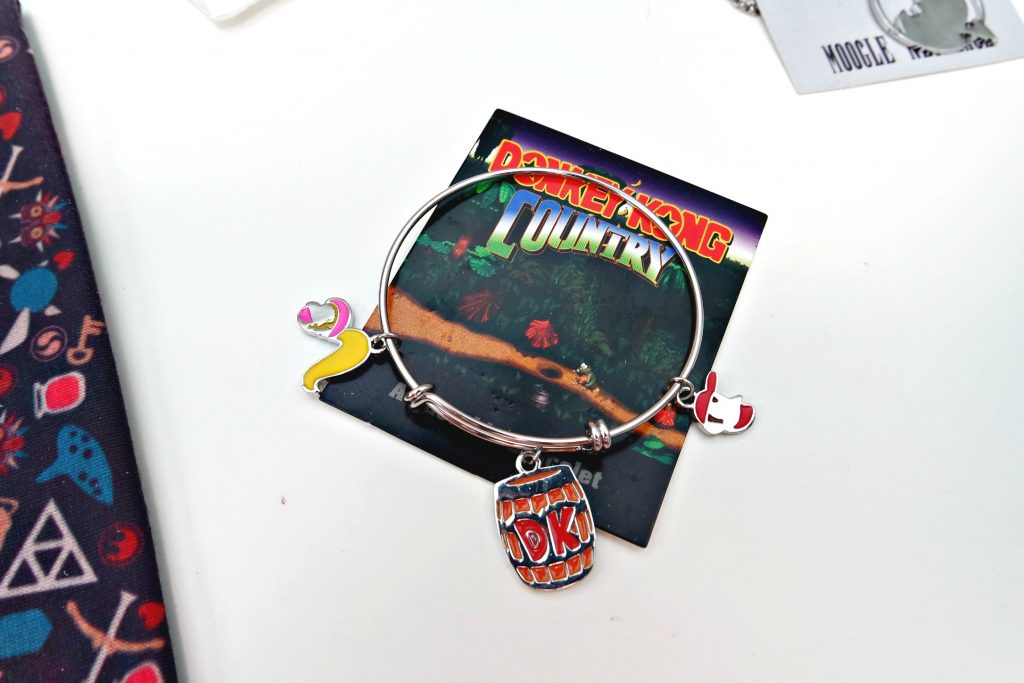 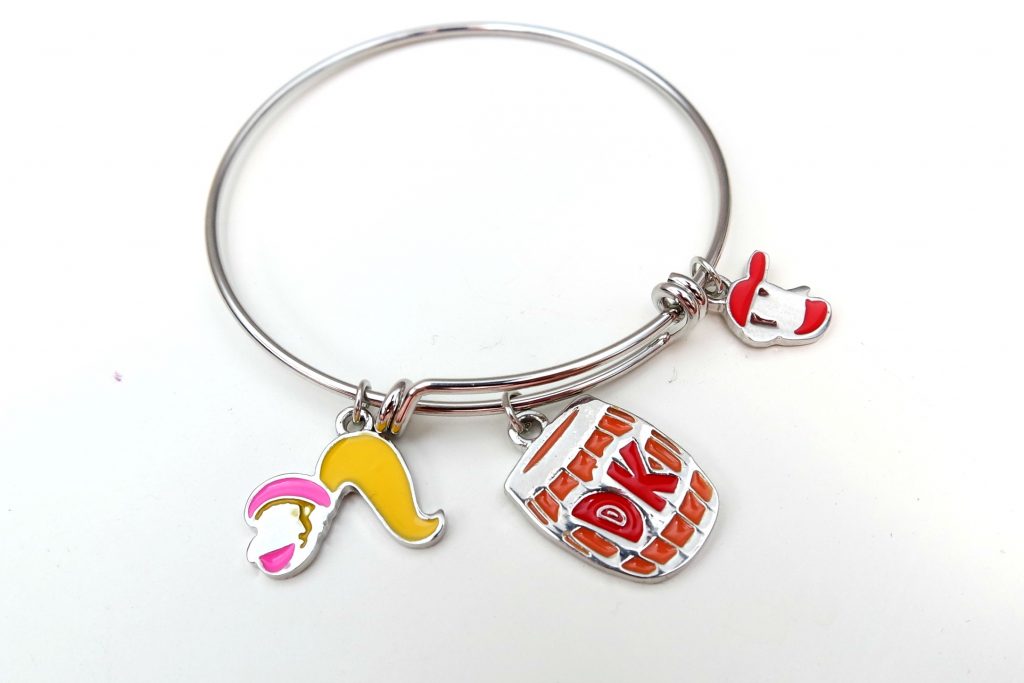 The third item in the box is a Donkey Kong Country Bracelet. This bracelet is made of (stainless steel?) metal and can be enlarged to fit your hand through but it stays in one size. I think I have regular sized wrists and it fits well on me. It still has a lot of space and doesn’t fall of my hand. The bracelet has three charms, Dixie Kong, Diddy Kong and a Donkey Kong Barrel. I love this bracelet. I think the charms are extremely cute and noticeable enough to see what they are. I have very fond memories of the first Donkey Kong Country, and I still often watch speedruns of this game. 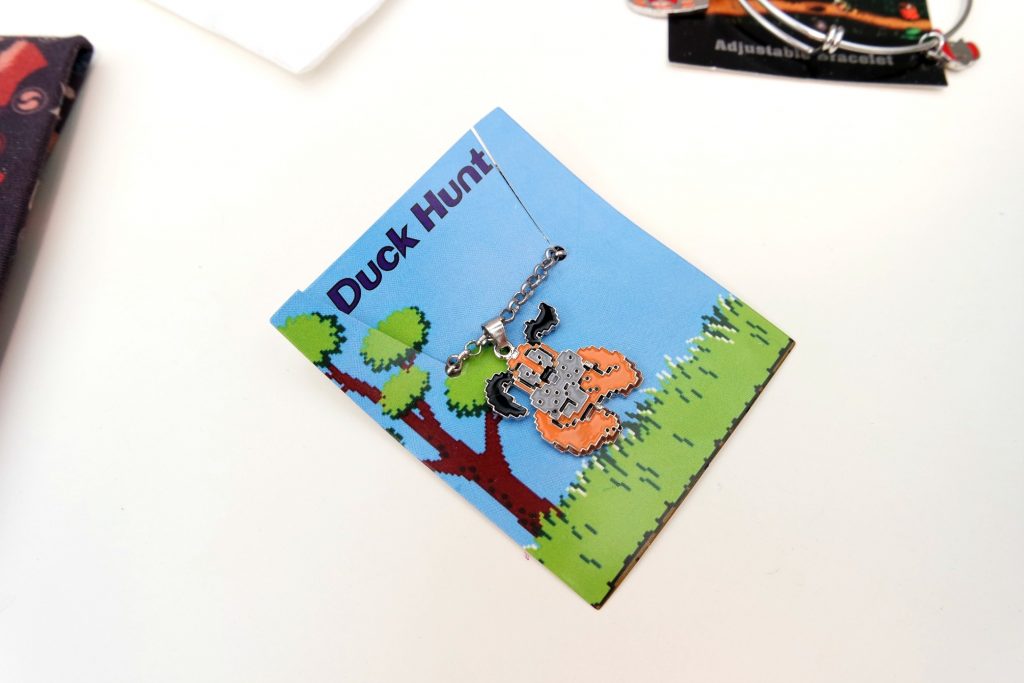 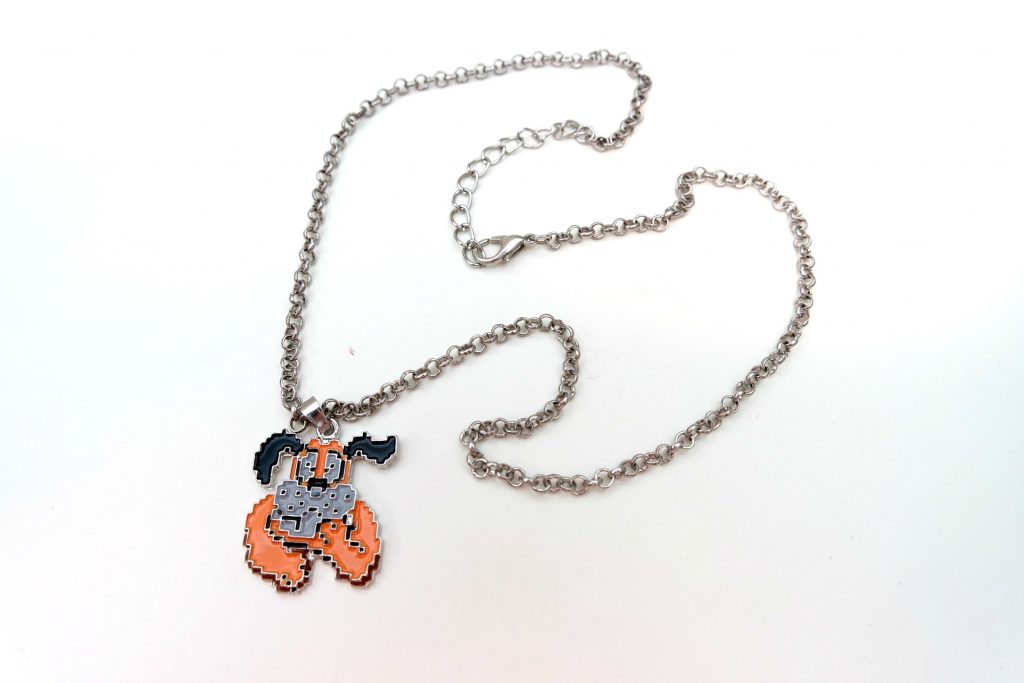 The fourth item in the Gamer Girl Monthly September 2016 Box is a Duck Hunt Necklace. This necklace is made of (stainless steel?) metal and has a short ball chain chain. The pendant shows the dog of the game Duck Hunt for the NES. The dog is laughing, which he does when you miss the ducks after having no bullets left. It looks very retro and I really like it. Duck Hunt has been one of my very first games that I’ve played so this definitely brings a lot of fun memories along. Again, I don’t like the short chain but you can also remove this pendant and change the necklace. 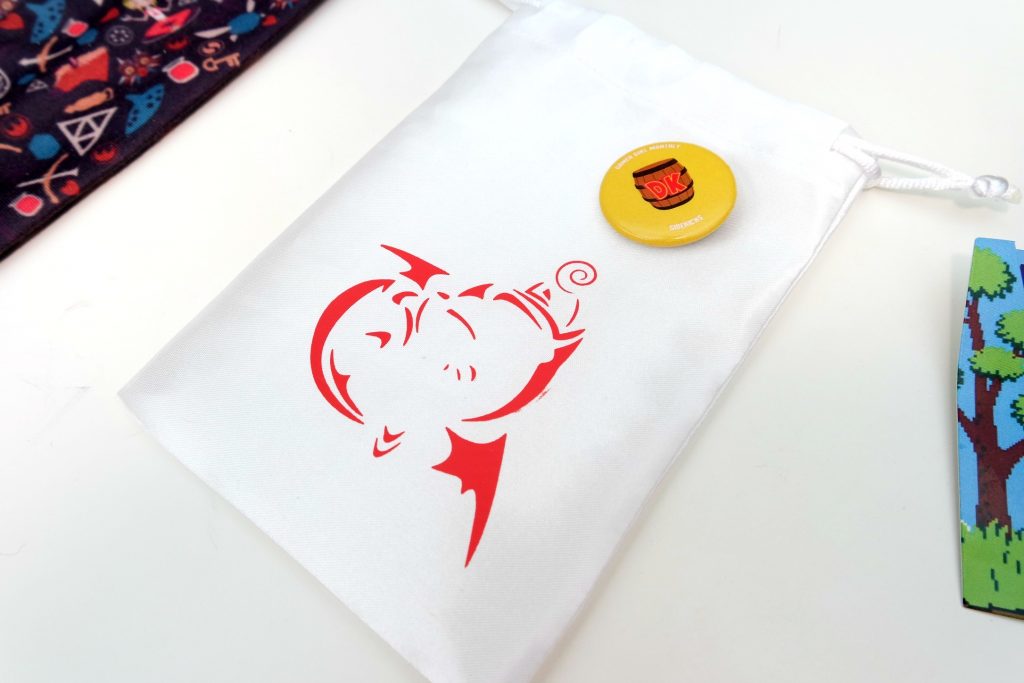 The last items in the box are extra’s, which are a pouch where you can store your items in and a monthly collectible button. The pouch is white and has an image of a Moogle, which is very cute. The button shows an image of a Donkey Kong Barrel. 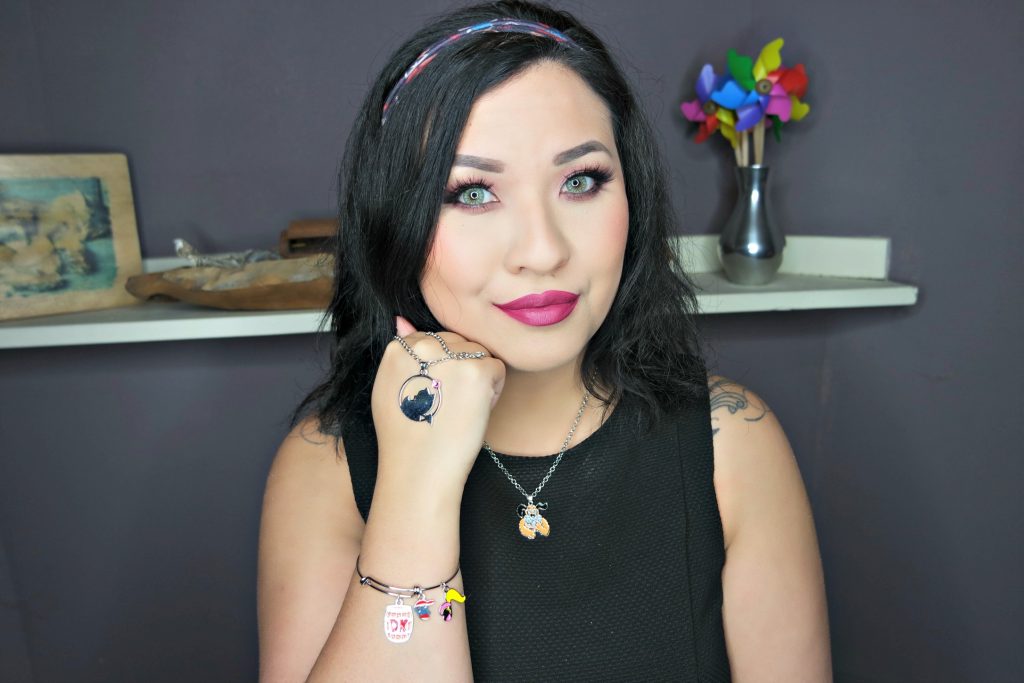 Overall, I liked the Gamer Girl Monthly September 2016 Box. I think that the items fit perfectly to the theme, and I really enjoy all the games that were featured. The only thing that I don’t like is that there are two necklaces in this box. I have complained about it before and again, why put two of the same items in the box while you can also do something like earrings or a ring or anything else? I also don’t like that some of items look very cheap. It might be that I’m a bit too mature for things like this and would like to see more quality, but I do think all the items are unique and fun. My favorite items in this box were the Donkey Kong Country Bracelet and the Duck Hunt Necklace. 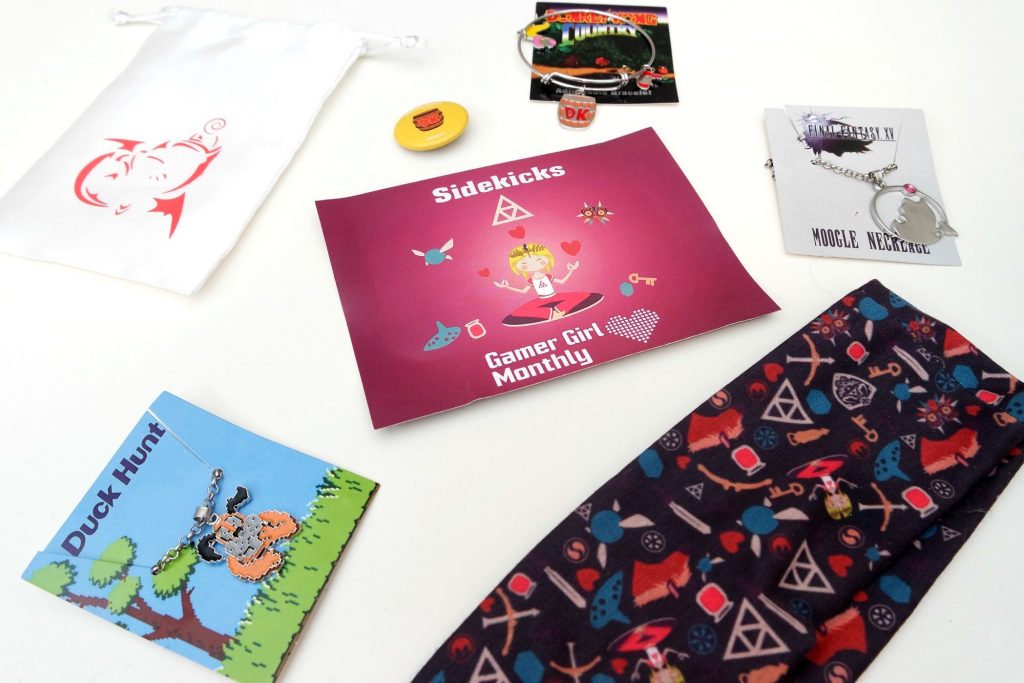