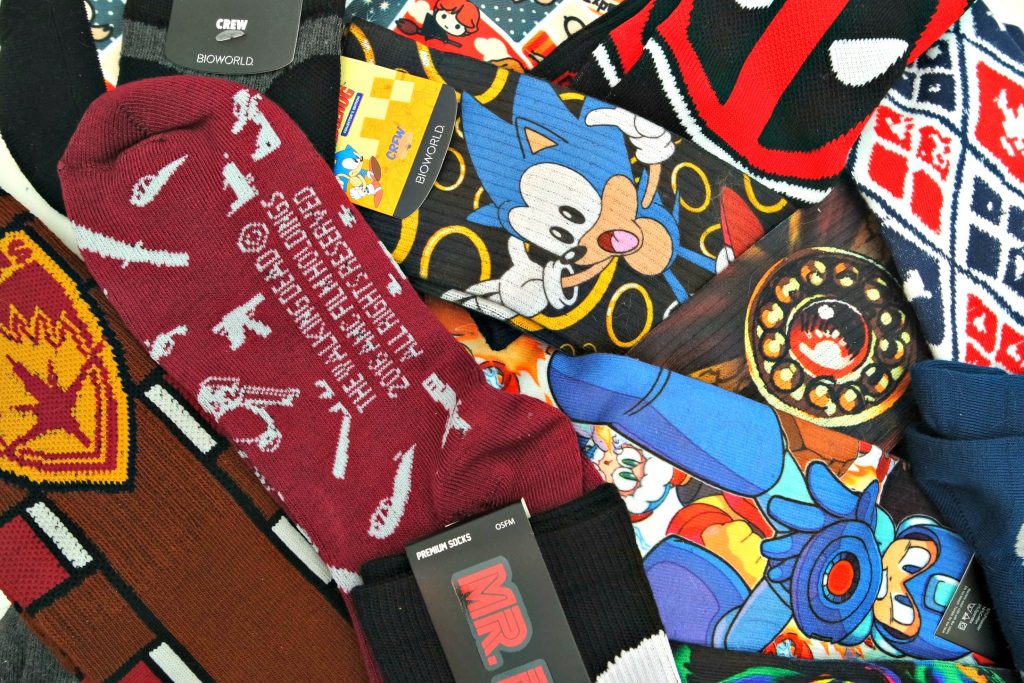 Lootwear Socks is a part of the Lootwear apparel by Loot Crate, which is a website that offers several geek themed Subscription Boxes like Gaming, Anime and Geek/Gamer Apparel. One of the subscription options that Loot Crate offers is to receive two pairs of geeky themed socks each month. I’ve been subscribed to this service for a few months and also posted a review already. For this post, I want to show you an overview of what kind of geek related themed socks I’ve received in the half year so that you might have an idea what to expect from this subscription service. 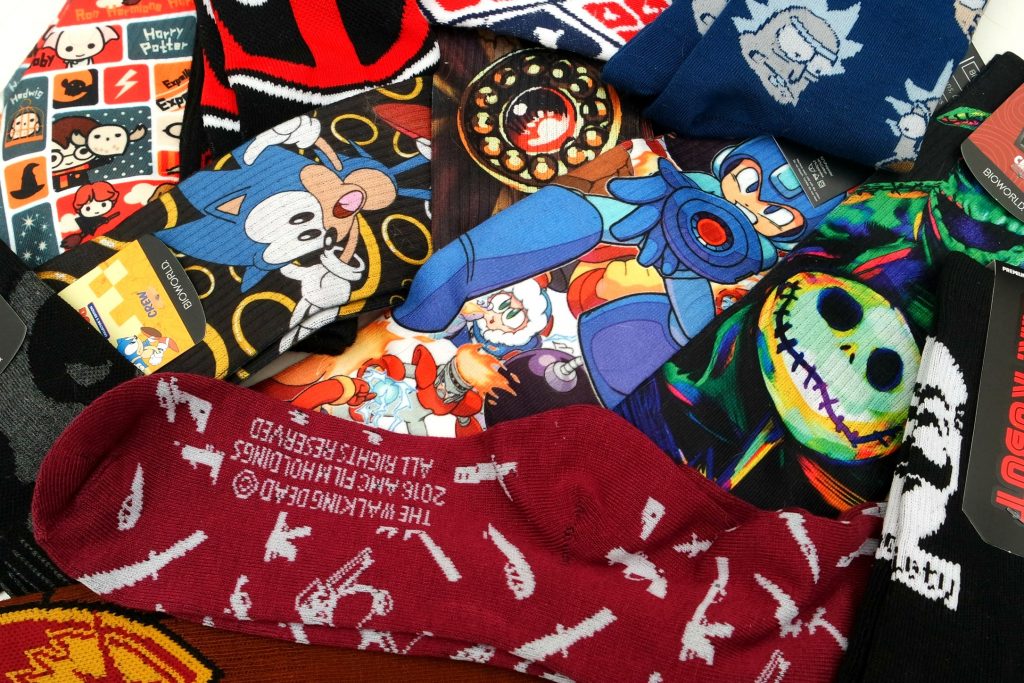 These socks are exclusively made for Loot Crate so you cannot find these anywhere else. The socks are unisex sizing with several styles. Every month there will be a new theme announced and the game/geek subject will be spoiled in advance if you want to know that beforehand. Examples of themes that will be mentioned in this post are themes like Horror, Anti-Hero and Futuristic. The featured titles can be anything that is considered as geeky titles of books, comics, movies and games. 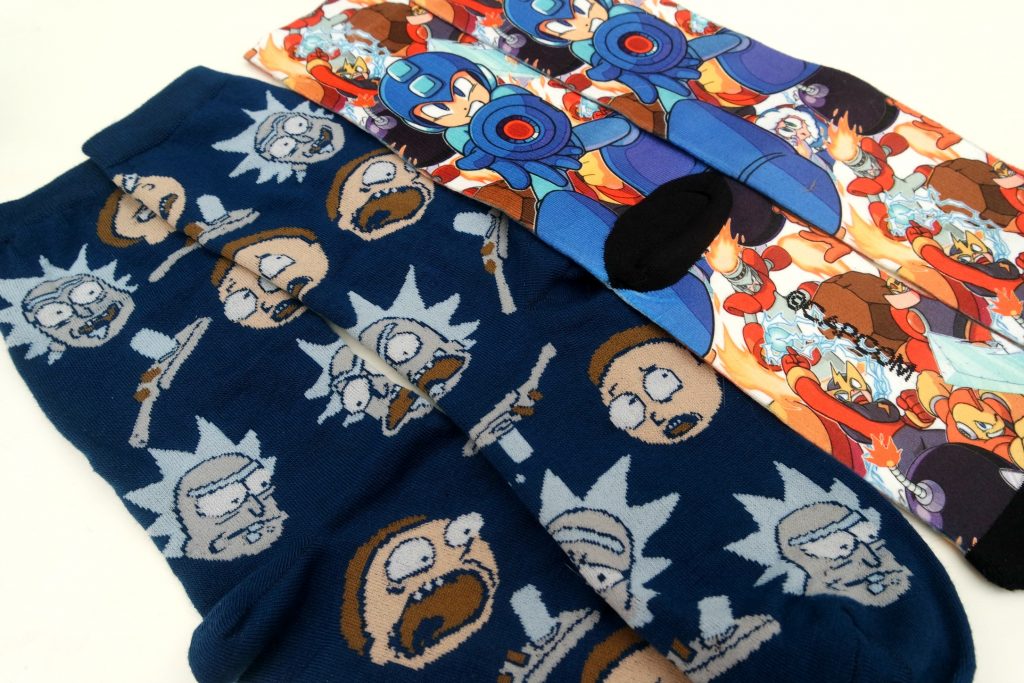 The theme of July 2016 was Futuristic and contained socks of Rick and Morty and Megaman. My boyfriend is crazy about Rick and Morty, it’s an animated series for adults that is supposed to be hilarious. I still have to watch an episode when I have the time to really enjoy and bingewatch! I’ve never really played any Megaman games before but I do remember watching others play it on the SNES when I was very young. For some reason, I don’t really am attracted to the series but many other love them!

This months set of socks were 50/50, the Rick and Morty socks were very usable, but the Megaman Socks are very uncomfortable because of the shape and style. I have received this style of socks before and you can’t see the image since the socks are really long and slump down when wearing, especially if you have thicker calf’s like me so you can’t even tell what it is most of the time. 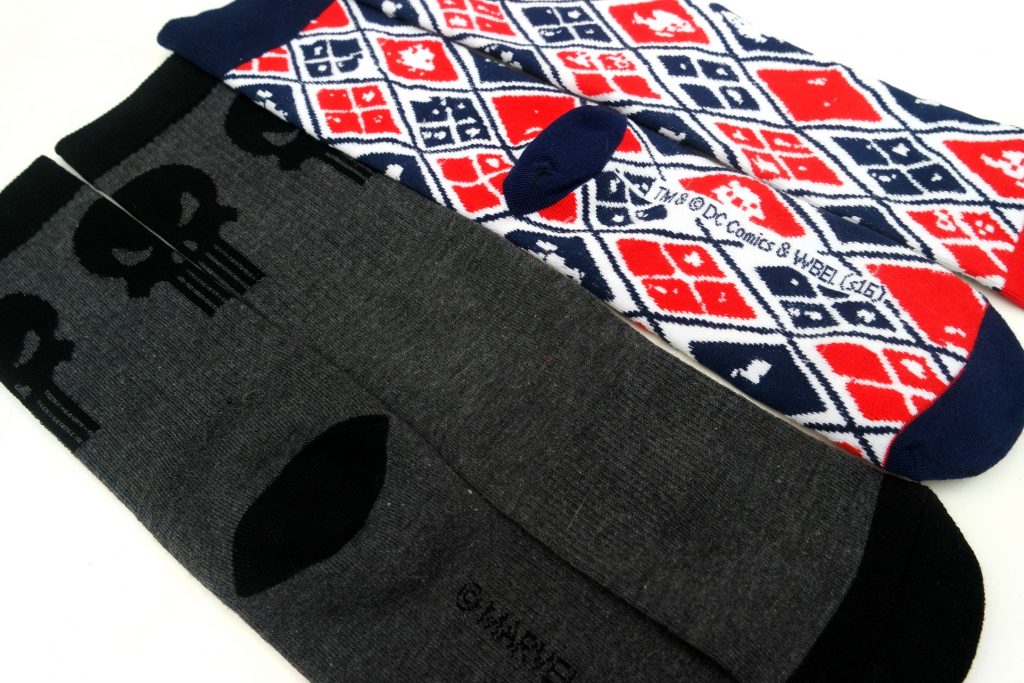 The theme of August 2016 was Anti-Hero and contained socks of The Punisher and Harley Quinn. Both of them are comics, which is not a subject that I’m really familiar with. I have heard of The Punisher before but never really looked into it. I’m a bit more familiar with Harley Quinn due to the Batman Animated Series from way back when. The character also gained a lot more fame since the new movie Suicide Squad, which also wasn’t my cup of tea.

This months set of socks were a disappointment for me personally looking at the subject, but both socks are usable in terms of style and shape. 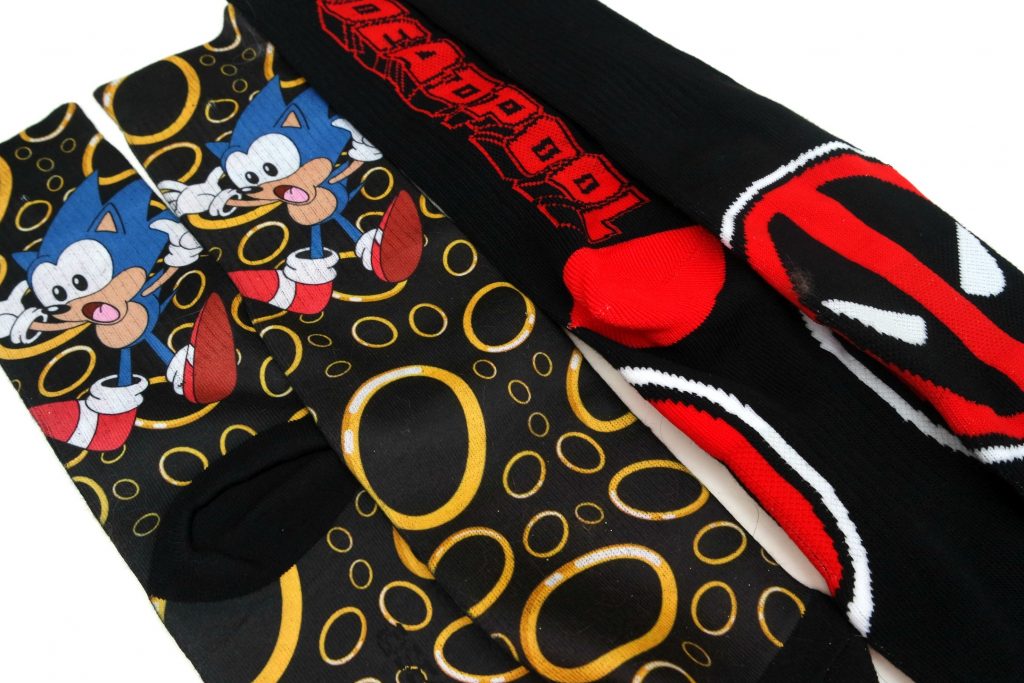 The theme of September 2016 was Speed and contained socks of Sonic the Hedgehog and Deadpool. I didn’t own a Sega system myself but a cousin of mine did, and I have very fond memories of staying over at my aunts house, playing Sonic with him. I don’t know which game it exactly was, but I always loved to play as Tails! I’ve only recently known about Deadpool, probably like a lot of people because of the movie. I found that the movie was hilarious and I can’t wait for the second one.

Again, this months set of socks were 50/50. The Sonic socks have the same style as the Megaman socks so not usable for me, which I really felt bad about because I love how it looks and I love sonic. The Deadpool socks are nicely wearable. 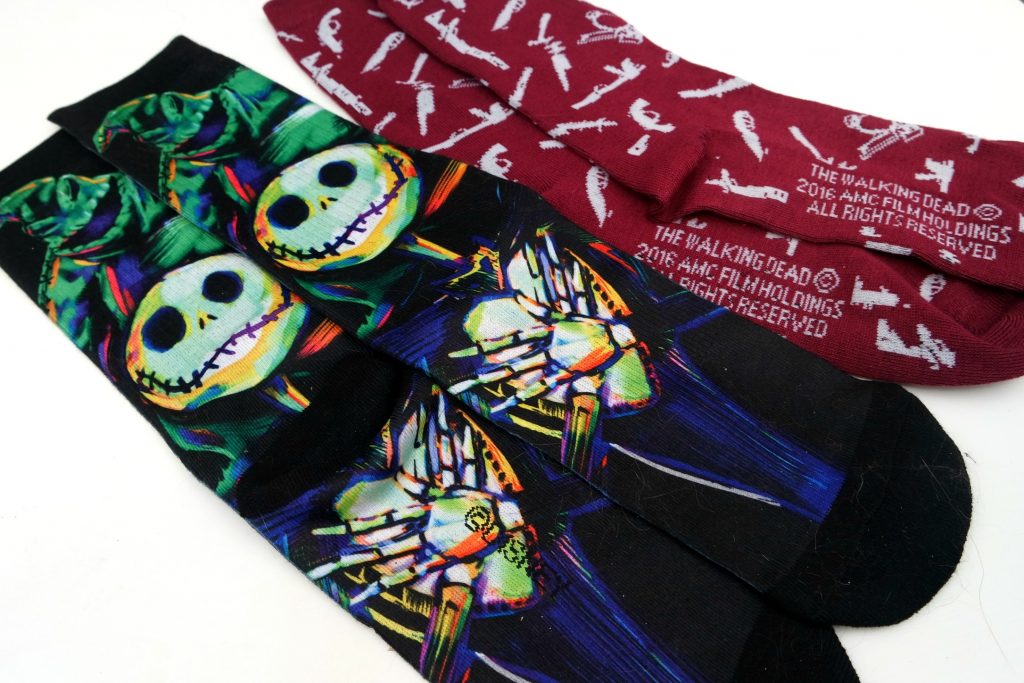 The theme of October 2016 was Horror and contained socks of The Nightmare Before Christmas and The Walking Dead. I love both of the themes. I liked watching the movie The Nightmare Before Christmas since I was a kid and loved it even more as a planet on Kingdom Hearts. I’m a huge fan of The Walking Dead, I love to read the comics and to watch the series. I have a thing for Zombies so I’m eagerly waiting for the season to continue.

Unfortunately, the The Nightmare Before Christmas socks have the same style that I don’t like as the previous Sonic and Megaman socks, so I won’t be using these. The socks of The Walking Dead are great and are definitely used. 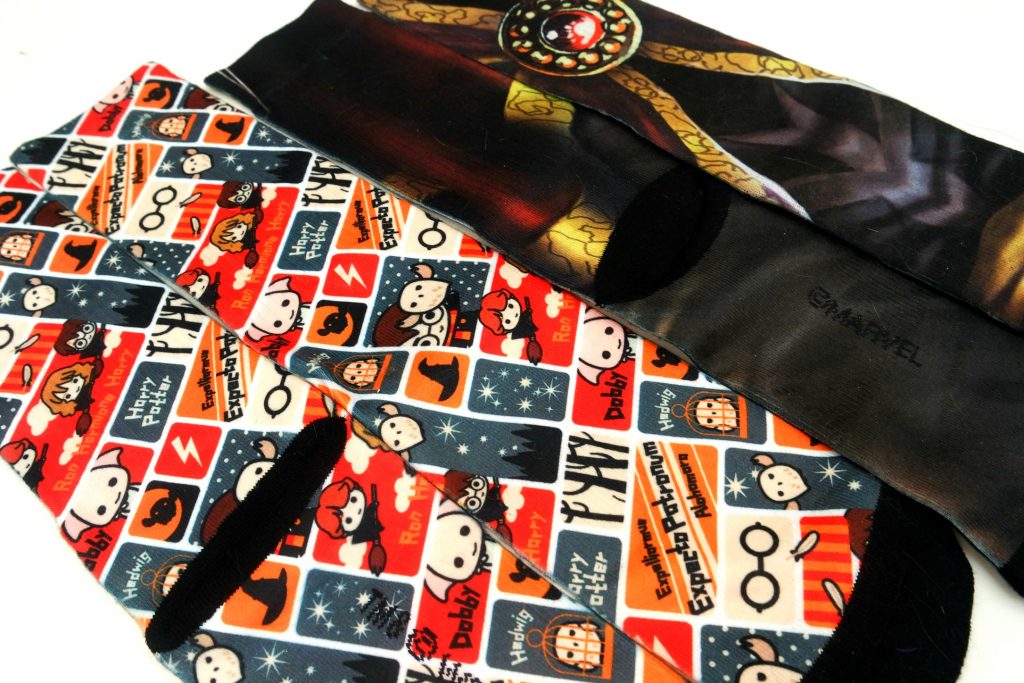 The theme of November 2016 was Magical and contained socks of Harry Potter and Dr. Strange. I didn’t read the books/comics but I have watched the whole Harry Potter Movie Series and the Dr. Strange movie. I really enjoy them both in their own way. I have to show you a parody of Dr. Strange which I have been obsessed with and played over and over, you will understand if you have seen the movies:

What is really disappointing about this month is that both socks are in the style that I hate. Both socks are very small and not really stretchy. I don’t really find this fabric that is used in this style of socks being universal, except if skinny emo legs only are seen as universal. 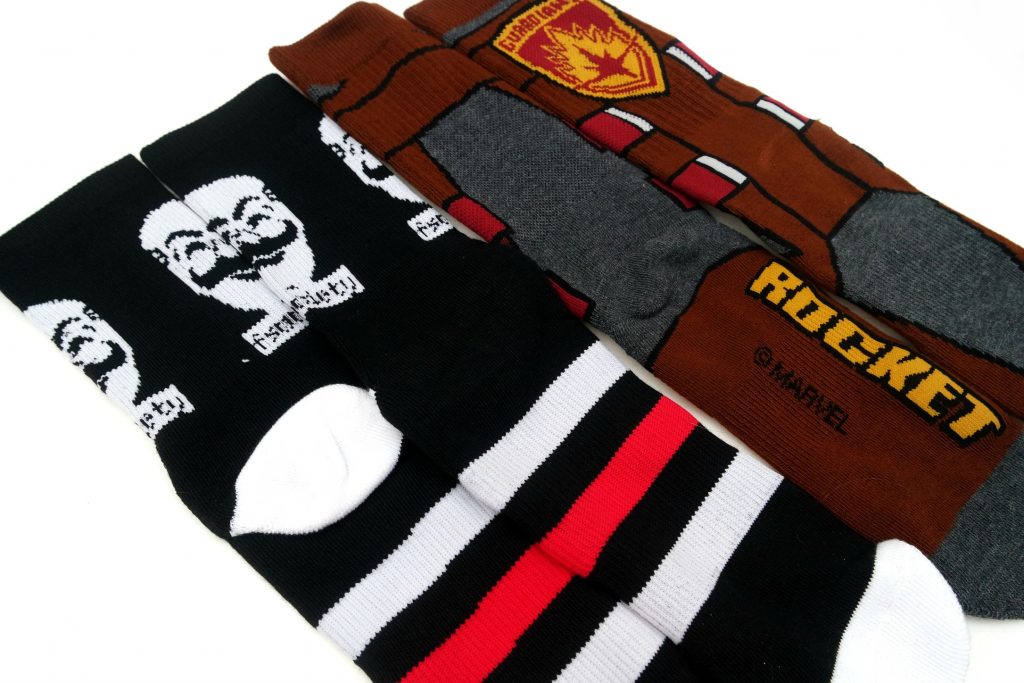 The theme of December 2016 was Revolution and contained socks of Mr. Robot and Guardians of the Galaxy. I’m obsessed with Mr. Robot, which is a series about a hacker. The actor that plays the main character, Rami Malek is one of the best actors I’ve ever seen. I love how he portrays the character and how the series is playing out is just brailliant. I didn’t know that the other socks were from Guardians of the Galaxy as I have seen the movie but apparently, these are socks of Rocket the Raccoon, a character in the movie. I would never even think of that and I don’t think other people would too except if you’re really a fan of the comic/movie. 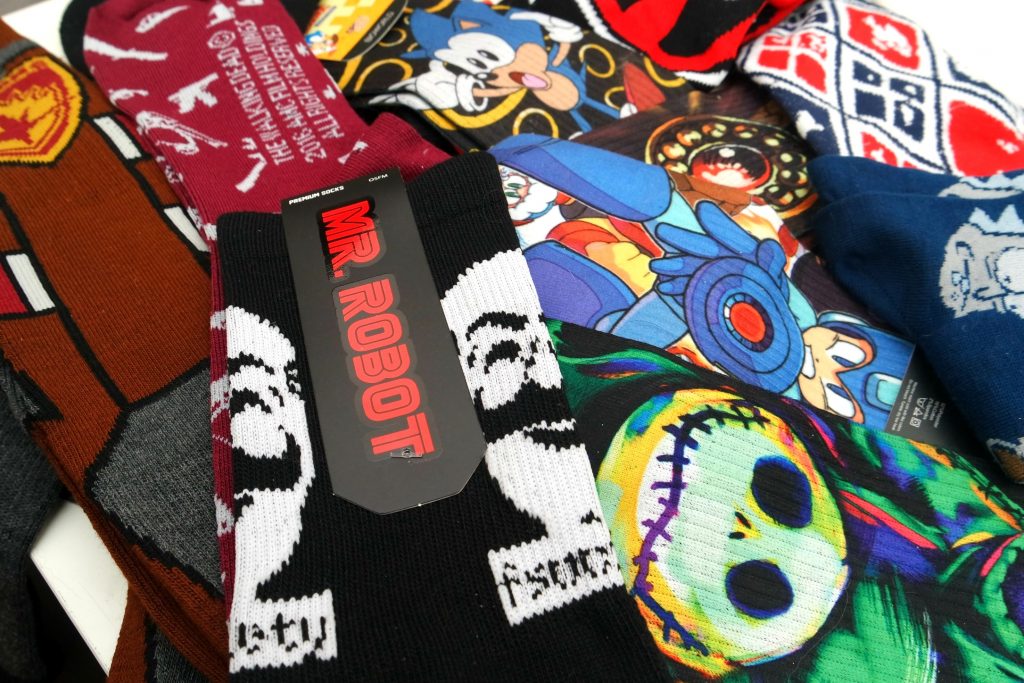 I actually ended my Lootwear Socks subscription since this month, which i have several reasons for. The biggest reason is the style of socks that pop up often that is extremely tight on thicker calf’s like I have. These are just not comfortable, are super long and sit really weird except if you have thinner calf’s. Another reason is that I’m not really into geeky stuff other than videogames, so even though I like a lot of the themes, I don’t “love” them.

Either way, if you would be able to wear all the socks that you receive each month, the value of the subscription is great for a pair of non-standard socks. If you have thicker legs like I do (I would say a European size 40 or up), I would not recommend getting this subscription service. 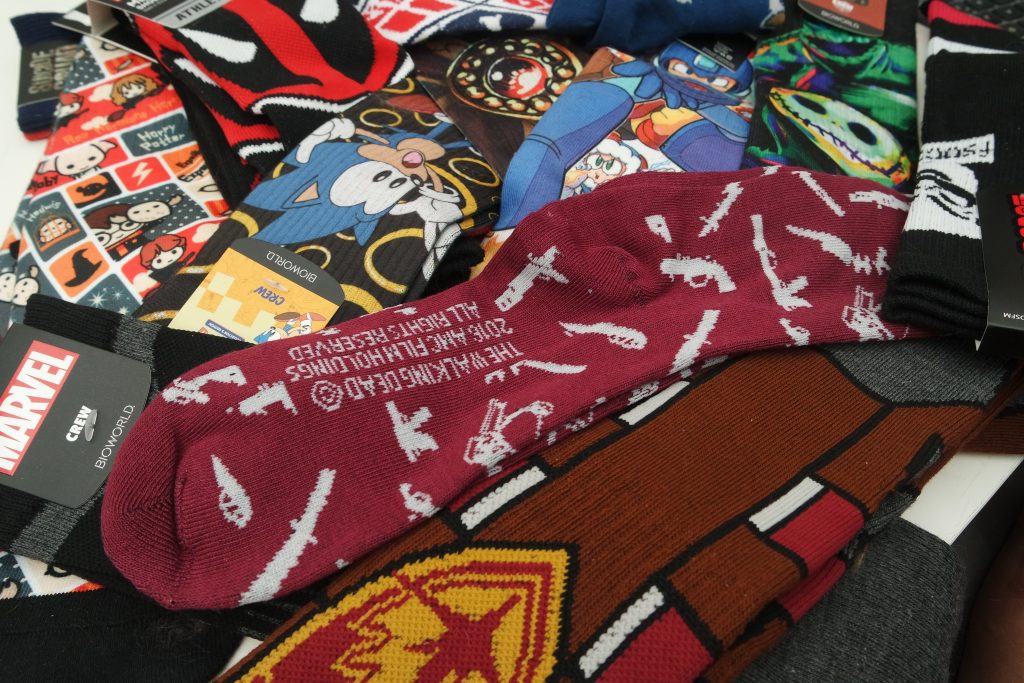 The Lootwear Socks subscription by Loot Crate is payed by creditcard and is available for $12.99 USD (check Xe.com for the current price in Euro) per month including shipping and handling to the Netherlands. The socks are delivered in your mail box. This means that you pay $6,50 USD per pair of socks.

Which theme and/or title did you find most interesting?