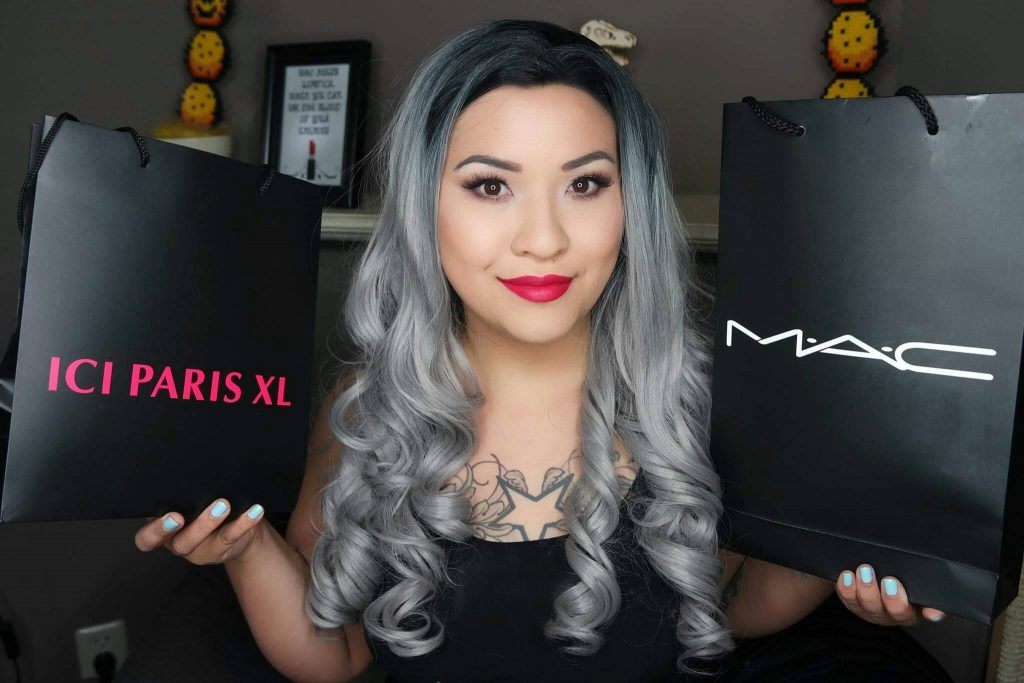 My birthday was already two months ago but I still wanted to share my Birthday Makeup Haul and just all the things I’ve purchased during the months of March, April and May. These are products outside of my Liquid Lipstick Haul. I’ve also won a few things during these months which I’m also showing. I did some shopping at stores like Ici Paris XL, MAC Cosmetics and also done a lot of online shopping at stores like Sephora, Beautybay and many more! 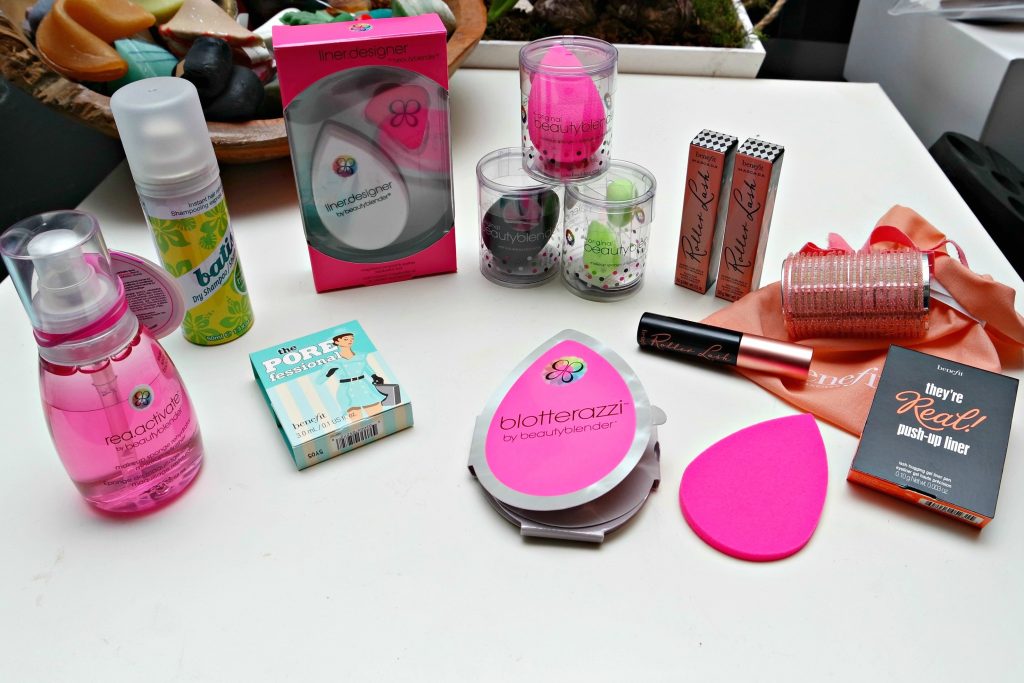 I’ve went to a few fun events which I’ve won. One of these events was the Beautyblender x Beautylab High Tea in Utrecht. We were able to test out the Beautyblender liner.designer by creating a look on yourself using this product.  Benefit was also at the event to provide the make-up and there was also a contest. We already were getting goodiebags at this event but if you would one the contest, you would get an additional goodiebag. Guess who won? 😀 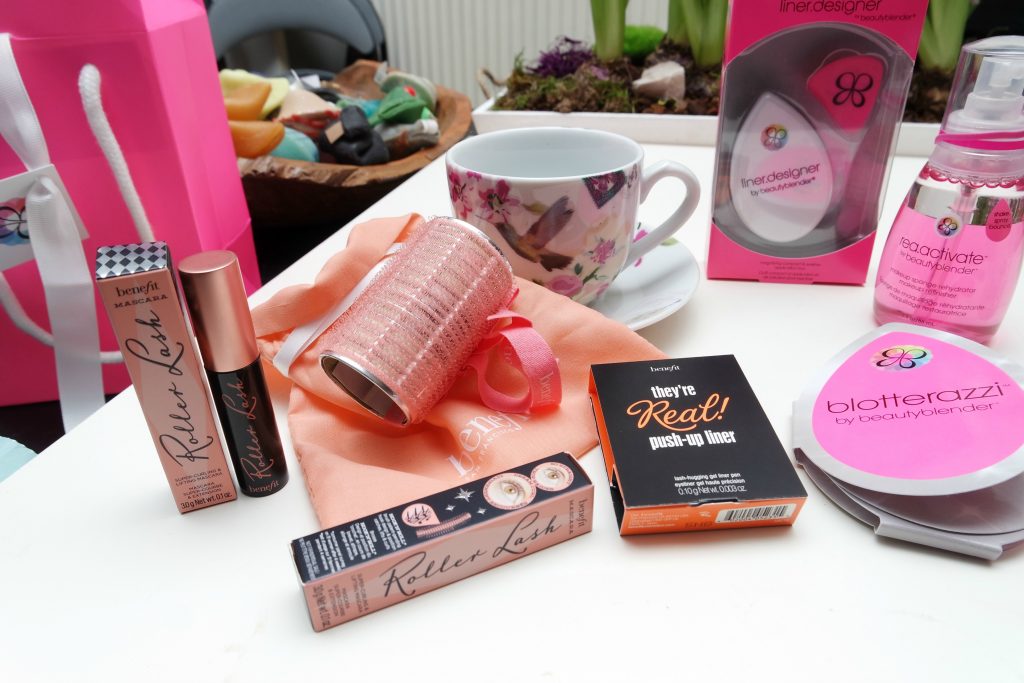 For the invitation, we received a gorgeous Teacup which you can see in the back. Inside the goodiebag, there was a mini Benefit Roller Lash Mascara, we already received one when we were applying our make-up so we received two in total. There was also a mini Benefit Pushup Liner, a mini Benefit Porefessional Primer and a mini Batiste Dry Shampoo in Tropical  inside the bag. We also were able to keep the Beautyblender liner.designer and a Original Beautyblender which we used during the event. 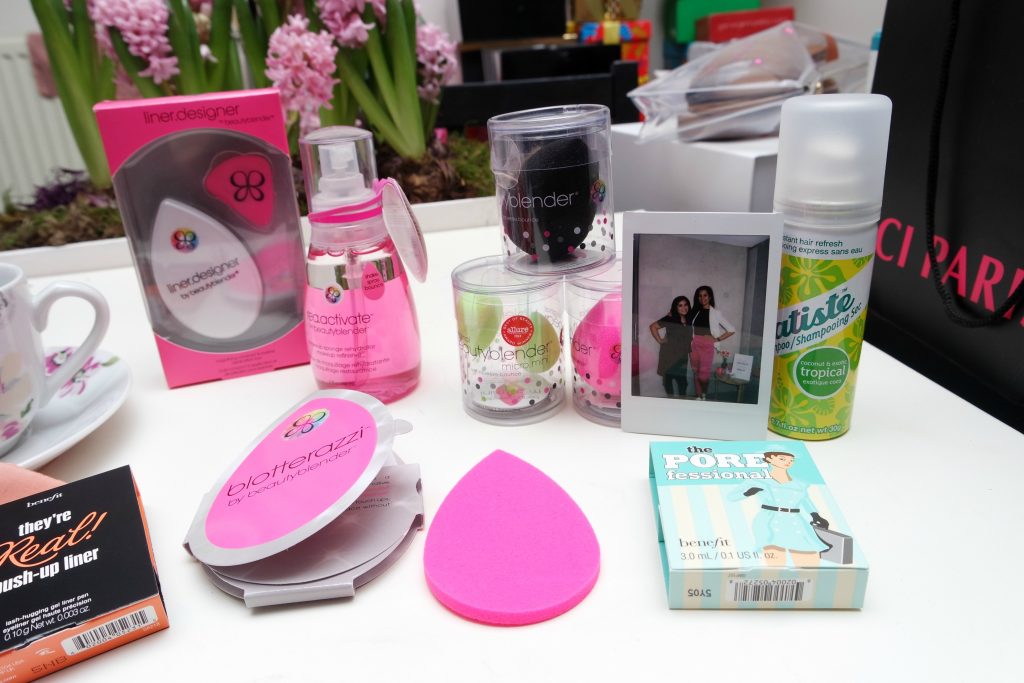 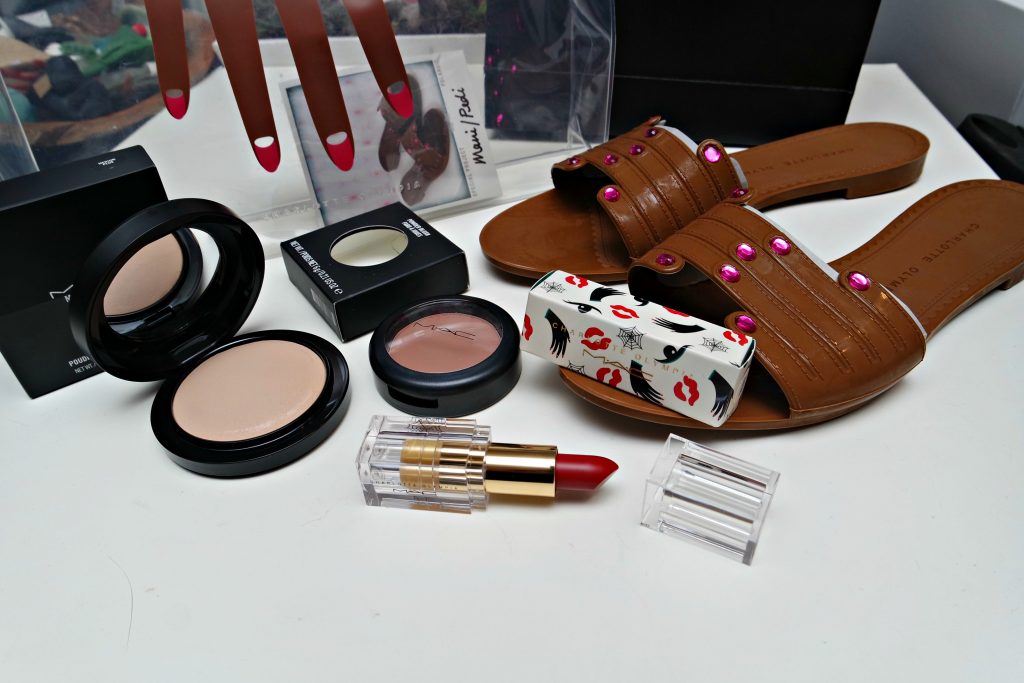 I’ve also won an event via Debbie (Beautyscene.nl) for the MAC x Charlotte Olympia pre-launch party in The Hague. We were the first persons in the Netherlands to try out the new collection and received a goodiebag with the Charlotte Olympia Manipedi Sandals. During the event, I’ve purchased the MAC x Charlotte Olympia Leading Lady Red Lipstick, the MAC Miniralize Skinfinish Natural in Medium Plus and the MAC Powder Blush in Harmony. This was again a very nice event and it’s always great to talk to Debbie. I really like her so much, she’s a lovely person with great taste in make-up! 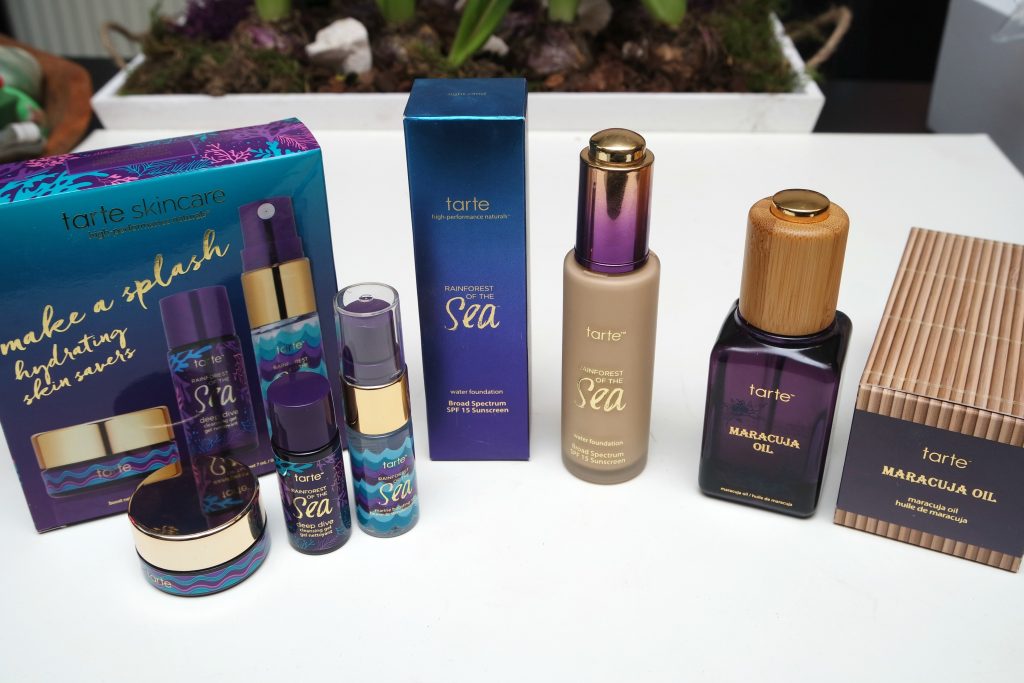 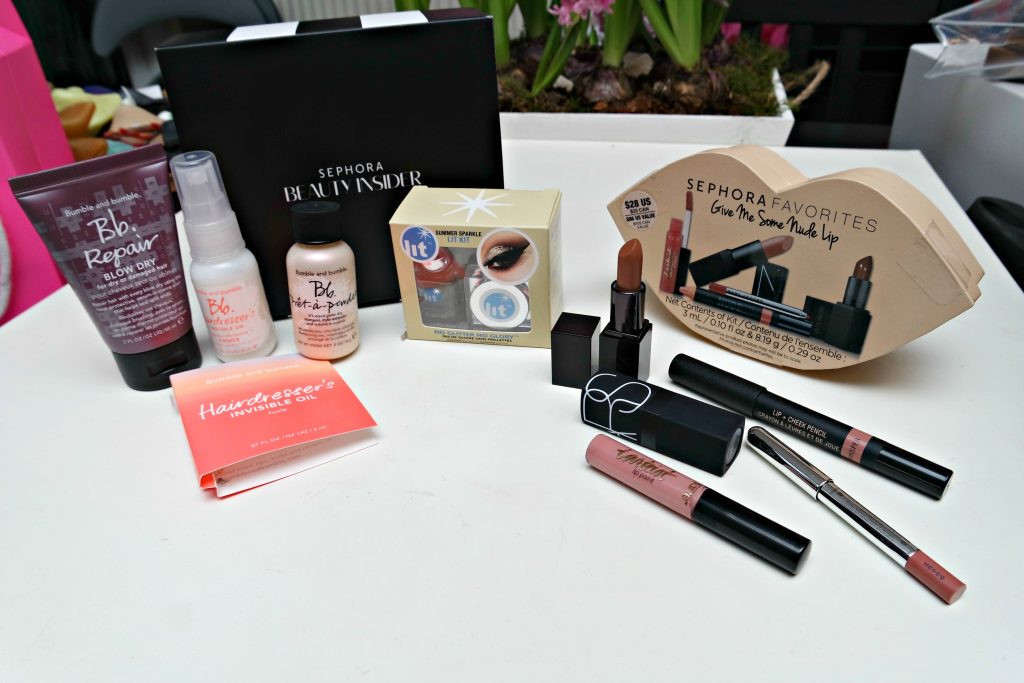 Outside of tarte, I also puchased a few other things like the Sephora Favorites Give Me Some Nude Lip value set, which contains five miniature nude lipstick products from Nars, Laura Mercier, Marc Jacobs, tarte and Nudestix. I want to experiment more with glitter so I purchased the Lit Cosmetics Summer Sparkle Lit Kit in Hello Sunshine, which contains a glitter and a liquid base. Lastly, because I’m a Sephora VIB Rouge Member and it was my birthday month, I could pick a free birthday gift. Unfortunately, both gifts are not shipped to the Netherlands so instead, I got extra points and got the Bumble and Bumble The Transformation Collection Set, which contains the Bumble and Bumble Hairdresser’s Invisible Oil Heat/UV Protiective Primer, Haidrresser’s Invisible Oil, Repair Blowdry Serum-in-Creme and the Prêt-à-Powder Dry Shampoo. 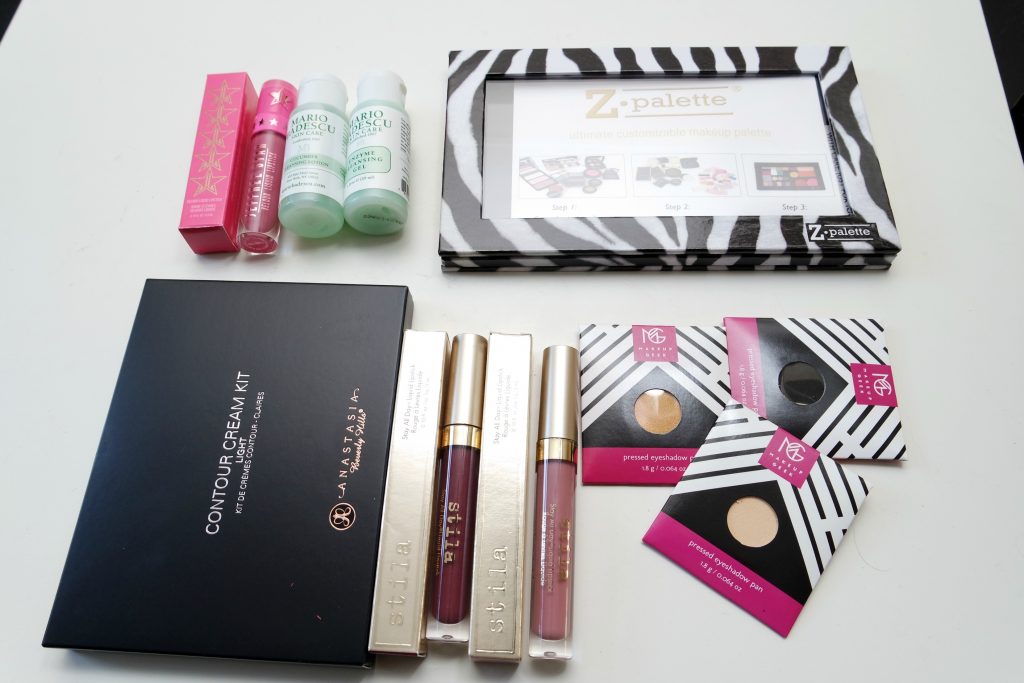 I had another online shopping spree at Beautybay.com. I also added some liquid lipsticks here because these were not in the Liquid Lipstick Haul. I purchased some extra Makeup Geek Eyeshadows in Casino, Mirage and Corrupt. My Z-Palette was completely full so I purchased another Large one in Zebra. I wanted to have the Anastasia Contour Cream Kit in Light for a very long time and I finally purchased it. I also have gotten two Stila Stay All Day Liquid Lipsticks in Amore and Baci. Speaking of Liquid Lipsticks, I also got two new Jeffree Star Velour Liquid Lipsticks in Doll Parts, Scorpio and Gemini (last two are not shown, review here). Together with the Beautybay.com products, I’ve received the Mario Badescu Enzyme Cleansing Gel and the Cucumber Cleansing Lotion miniatures as a sample. 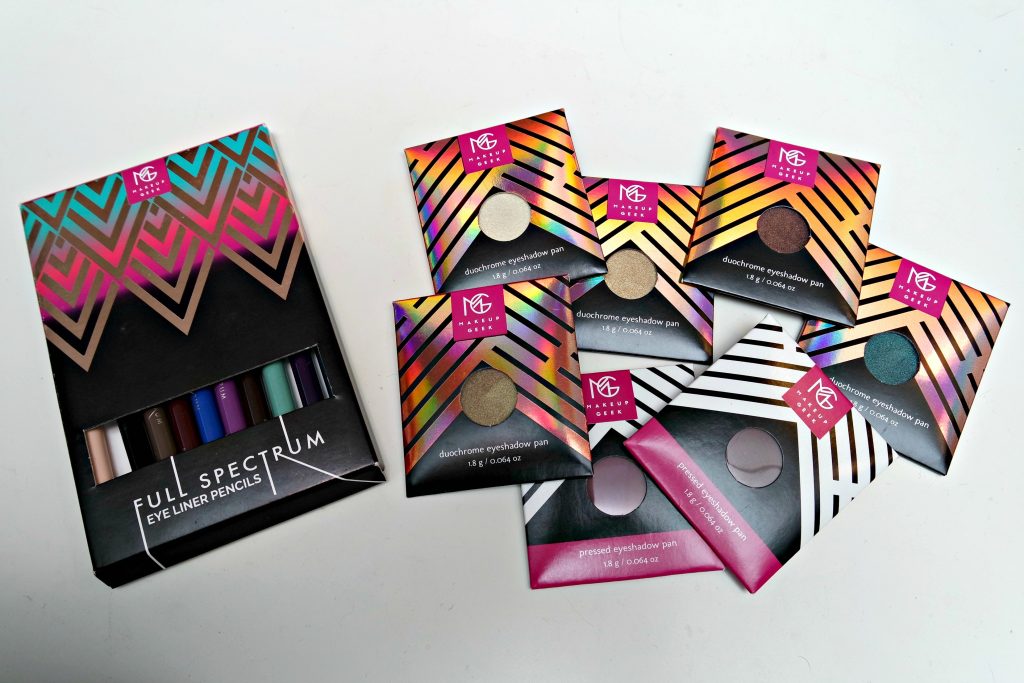 But we’re not done with Beautybay, I did another seperate order and purchased the Makeup Geek Full Spectrum Eye Liner Pencils and a few more Makeup Geek Eyeshadows in Voltage, Karma, Ritzy, Secret Garden, Steampunk, Cherry Cola and Americano. 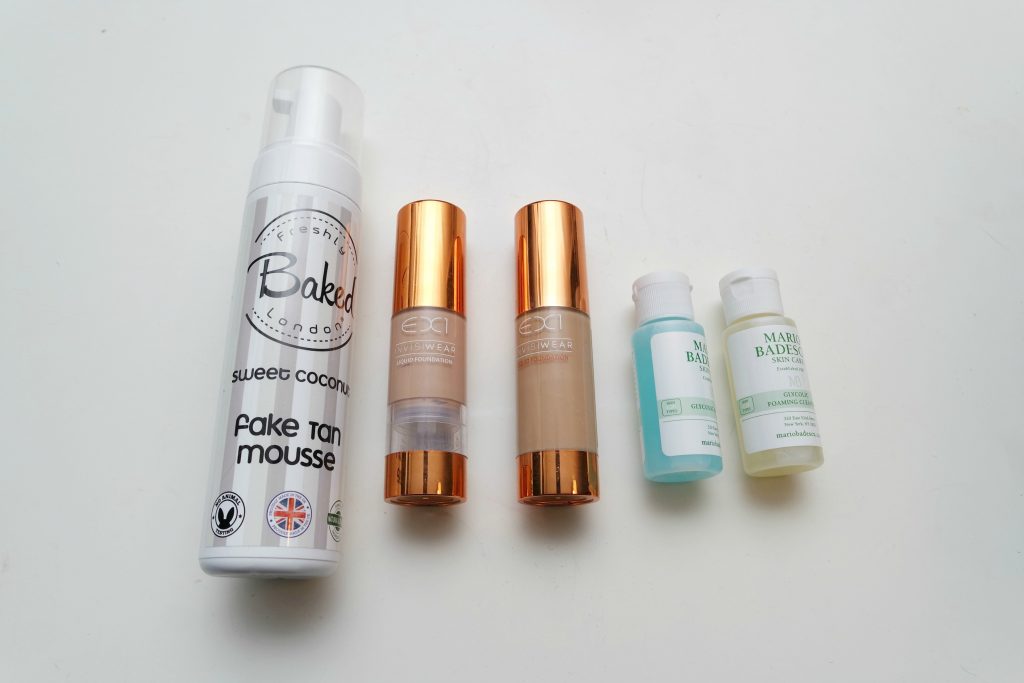 Another small Beautybay thing and then it’s done! 😉 I also forgotten I’ve purchased the Freshly Baked London Sweet Coconut Fake Tan Mousse and received more Mario Badescu samples, this time I received the Glycolic Foaming Cleanser and the Glycolic Acid Toner. Now at a different online store, Lookfantastic.com, I’ve purchased the EX1 Cosmetics Invisiwear Liquid Foundation in the shades F100 and F200. As you can see, I’m very much enjoying the F100 shade, F200 is still a bit dark for me but it will be ok once I’m more tanned. 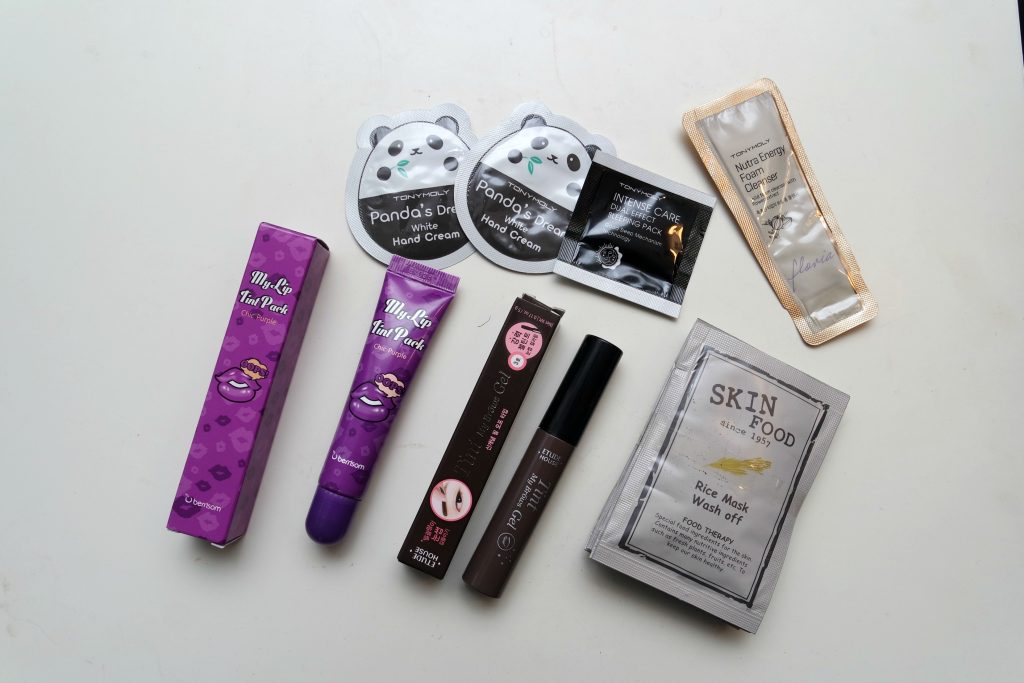 In a very random mood, I’ve made an online purchase at BeautynetKorea.com and have gotten the Etude House Tint My Brows Gel in Gray Brown and a set of five Skinfood Rice Mask Wash Off Samples and also received some very cute Tony Moly samples with my purchase. I’ve also received another Korean Beauty product in a surprise beauty box I bought from someone, which is the Berrisom My Lip Tint Pack in Chic Purple. 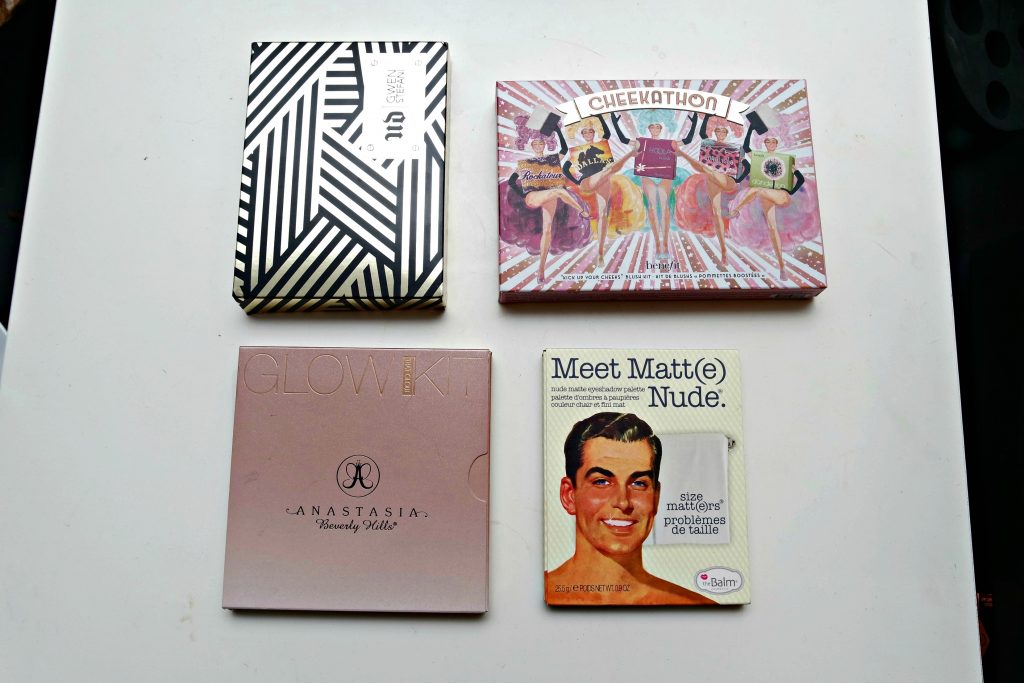 Inside the surprise box, there was also the Urban Decay x Gwen Stefani Blush Palette. I’ve also purchased the theBalm Meet Matte Nude Palette via a girl who was selling it on Facebook. I purchased the Anastasia Glow Kit in That Glow at AnastasiaBeverlyHills.com. Now let’s go to the Dutch (web)stores. I purchased the Benefit Cheekathon Palette at Douglas.nl, which I’ve already reviewed here. 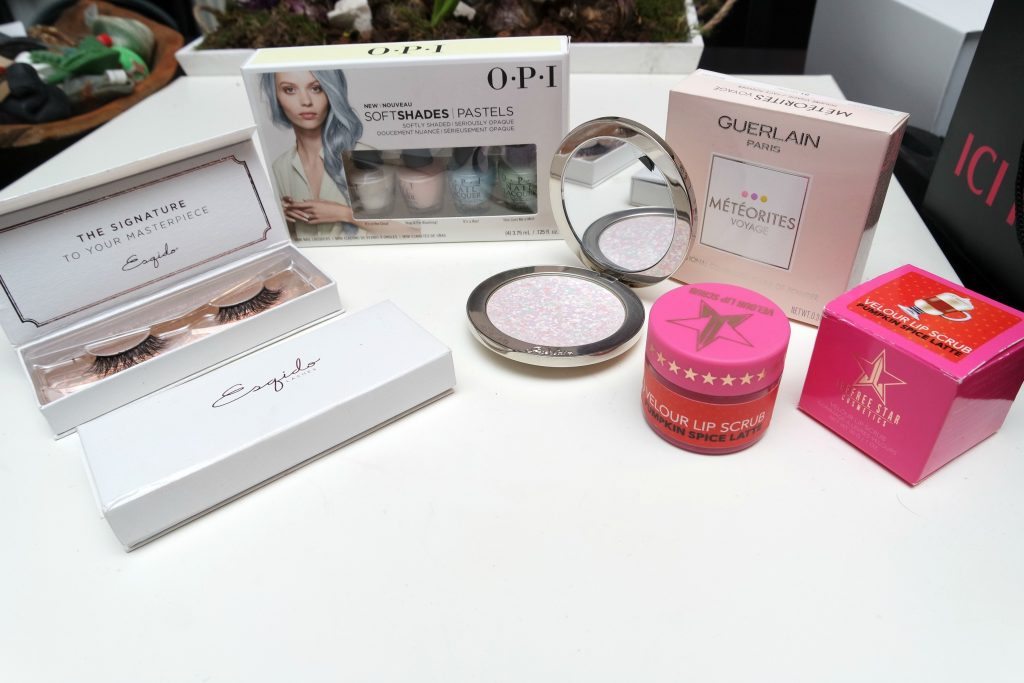 Here are some extra random stuff. I’ve also purchased the OPI Softshades Pastels Nailpolish Set (review here) now just at a Douglas store. I’ve purchased the Esqido Lashes in Viola and Black Magic again via a girl who sold that via Facebook and received the Guerlain Météorites Voyage Compact in the surprise beauty box. I also wanted to show you my Jeffree Star Velour Lip Scrub in Pumkin Spice Latte which I’ve purchased at Lashaddict.nl. 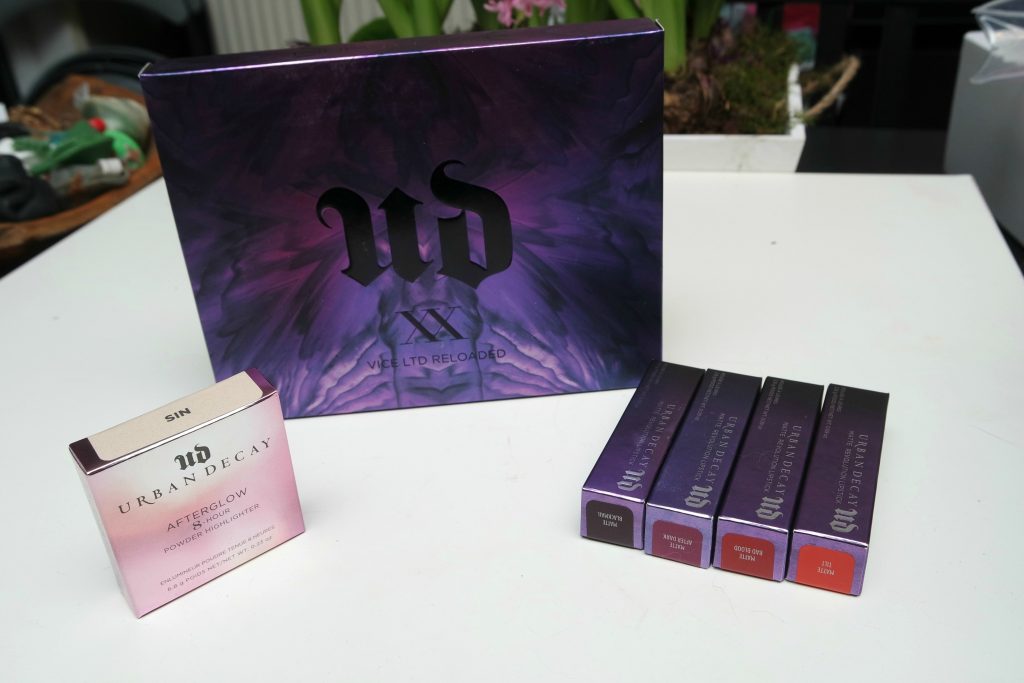 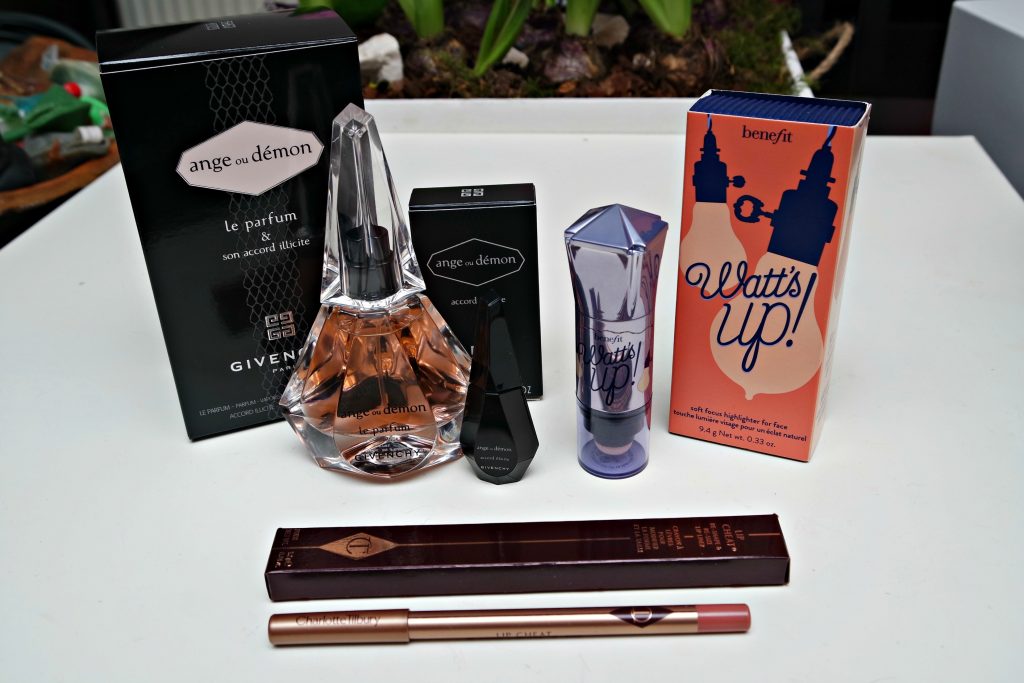 I never receive much make-up products for my birthday because I have so much already and a lot of my friends are not into make-up. My boyfriend gave me the Givinchy ange ou démon EDP set and the Benefit Watt’s Up Higlighter as a gift (aka I picked everything and he bought it) via Douglas.nl. My dearest make-up bestie Wies (xwiesx.com) has given me my first Charlotte Tilbury product for my birthday, the Charlotte Tilbury Lip Cheat Lip Liner in Pillow Talk. 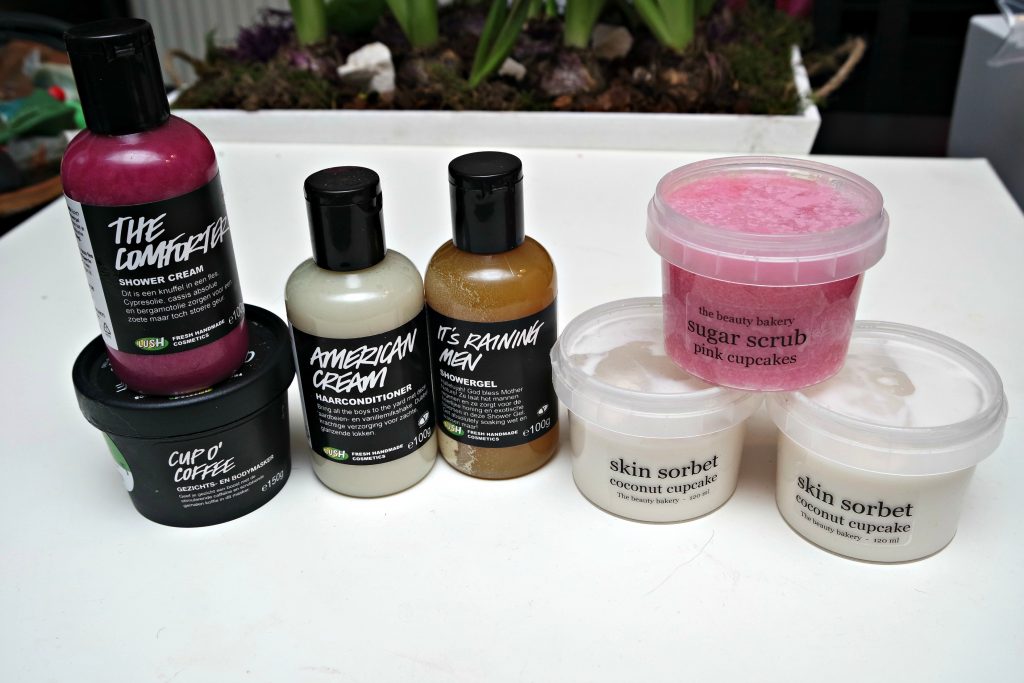 I’ve also received some Lush goodies for my birthday, the Lush Cup O’ Coffee Face and Body Mask, The Comforter Shower Cream, It’s Raining Men Showergel and the American Cream Hairconditioner. I’ve also purchased a few bath & body products myself at TheBeautybakery.nl because I’ve won a gift certificate. There, I’ve gotten a The Beauty Suger Scrub in Pink Cupcakes and a Bakery Skin Sorbets in Coconut Cupcake but received two, which is very kind! 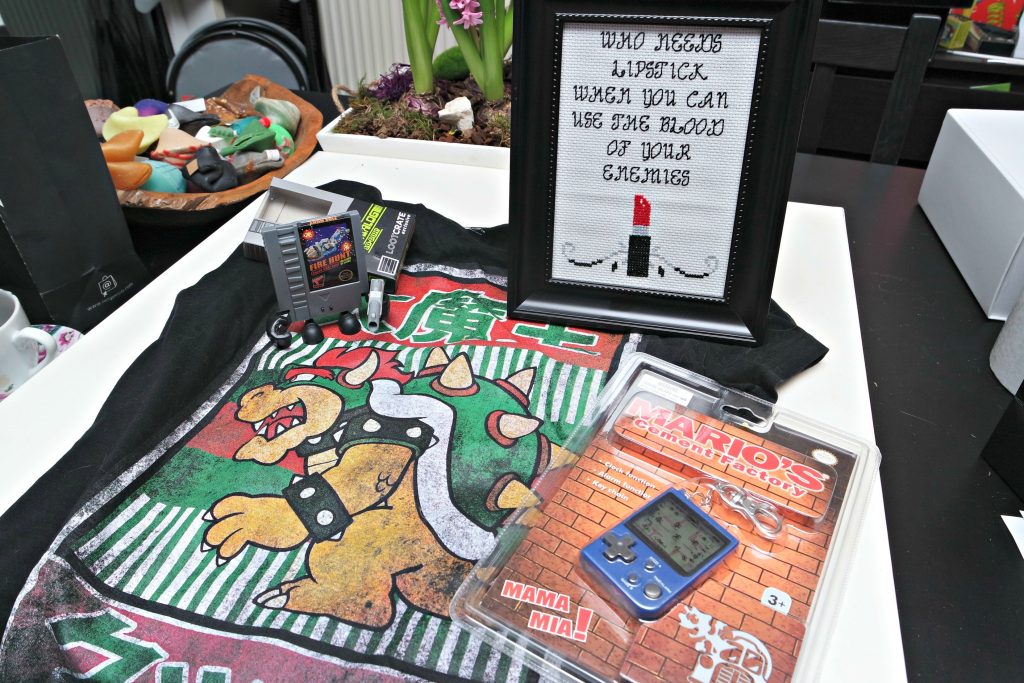 Here are a few other gaming and make-up related things that I’ve received from friends and family for my birthday. I really love the framed quote and the Bowser T-shirt. 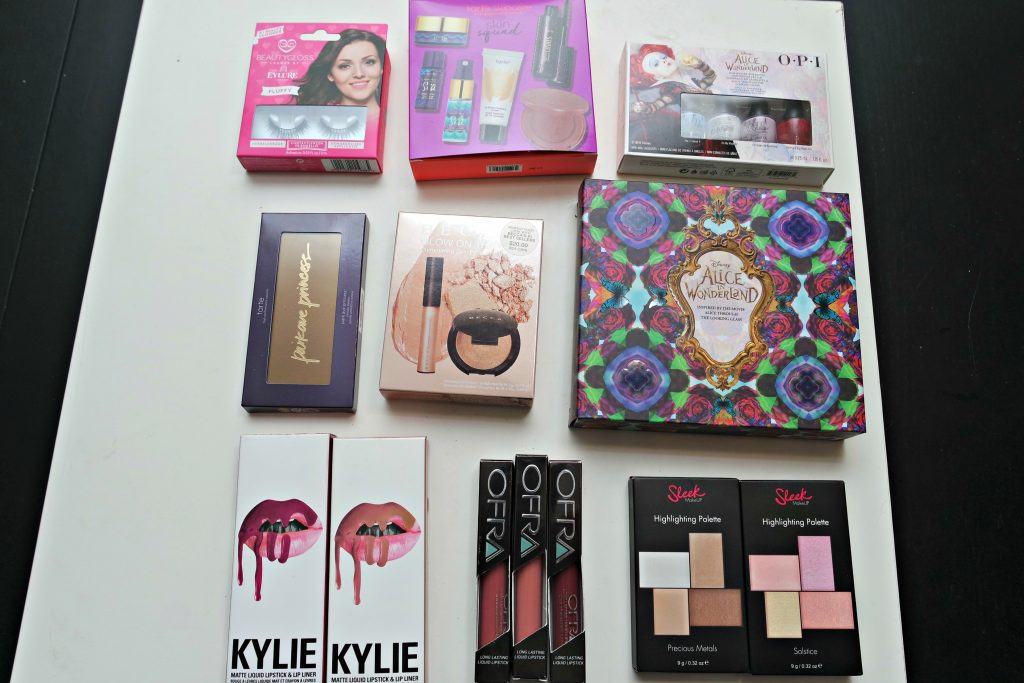 And last but not least, some other random stuff that I’ve gotten after I have taken all the pictures for this haul. It took me a bit longer to post because I had some other stuff I needed to show you due to limited edition collections and PR samples. These were also things that I purchased in the month of May, and this is probably not even everything that I purchased because I’ve already stored a lot of things and forgotten to take it along in this picture. I will go through these products quickly. I’ve purchased the Beautygloss Lashes by Eyelure in Fluffy, tarte skin squad mini set, tarte parkave princess palette, Becca Glow on The Go Shimmering Skin Perfector in Opal mini set, Kylie Lip Kits in Posie K and Candy K (review here), Manny x OFRA liquid lipsticks in Charmed, Aries and Hypno (review here), OPI Royal Court of Color Nail Polish Mini Set (review here), Urban Decay Alice Through the Looking Glass palette and the Sleek Highlighting Palettes in Precious Metals and Solstice.

I hope that you enjoyed my huge Birthday Make-up Haul, I really need to go on a no-buy but so many brands are releasing amazing products and collections. I think I will be doing a blogsale as soon as I have the time to sort everything and take pictures.

Let me know if you want a review of a certain product.