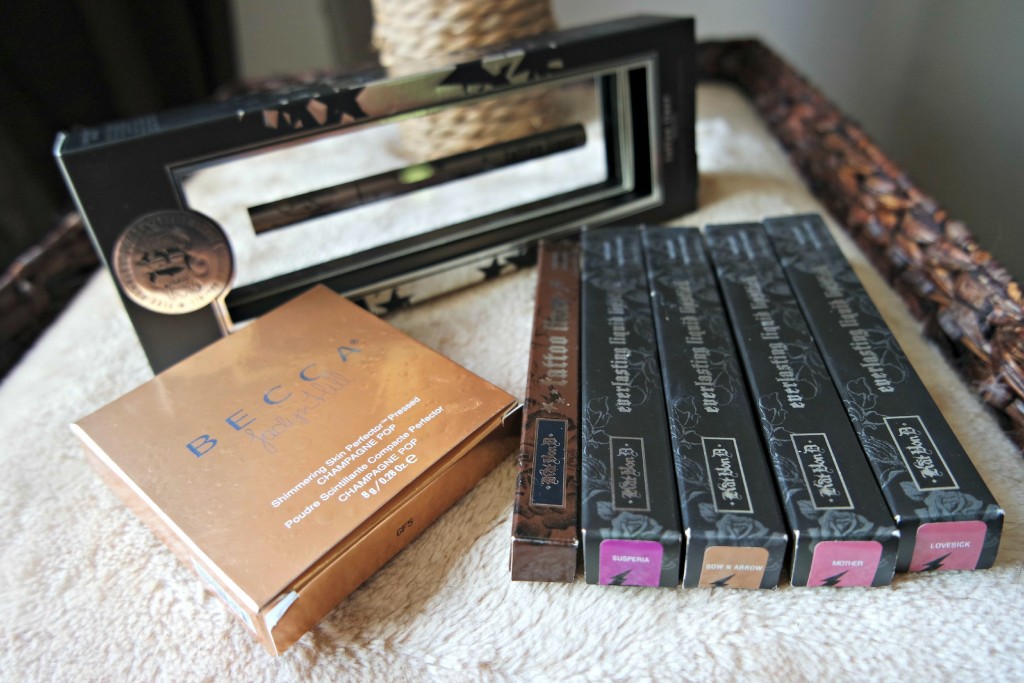 Taking a short break from all the Lipstick reviews I’ve done lately, I want to share my Make-up Haul and show you the awesome stuff that I’ve purchased in the last couple of weeks. These include items from Kat von D, Becca, Colourpop, Mac Cosmetics, Koko Lashes and more. Some of the things I’ve already reviewed and some you will see in future reviews.

There were a lot of new and exciting things at Sephora.com. Since I’m a huge fan of the Kat von D Everlasting Liquid Lipsticks I was excited to see that new shades were being released. I’ve purchased the shades Susperia, Bow N Arrow, Mother and Lovesick, which I’ve already reviewed these in several posts. My holy grail for eyeliner, the Kat von D Tattoo Liner in Trooper was almost empty so I needed to purchase a new one. At this moment, the brand has a Five Fearless Years Limited Edition Tattoo Liner to celebrate their five year anniversary. The brand also donates $1 dollar to the California Wildlife Center for every Limited Edition tattoo liner sold so I had to purchase that one instead a regular Tattoo Liner. The Tattoo liner was also available in a brown color, which I would love to have as an alternative so I’ve bought the Kat von D Tattoo Liner in Mad Max Brown. Last but not least, I had to get the ultimate highlighter which the whole internet has been raving about, the Becca Shimmering Skin Perfector in Champagne Pop, co-created by the always lovely Jaclyn Hill. You will definitely see a review about this gorgeous highlighter soon! 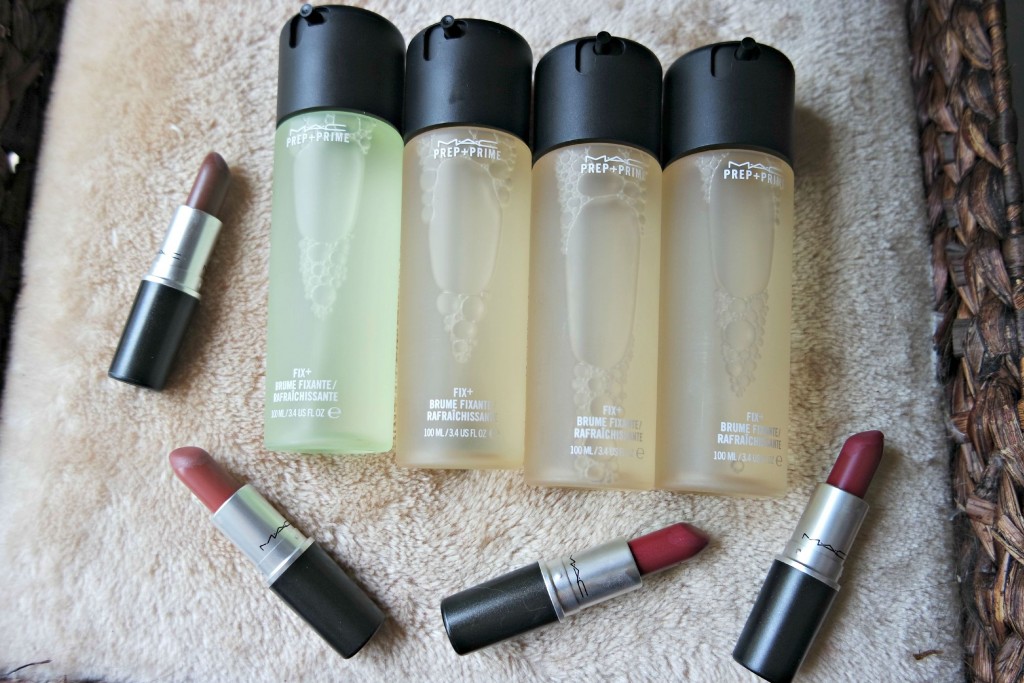 MAC Cosmetics has released some AMAZING new collections like Veluxe-A-Trois, Prep + Prime Fix + and The Matte Lip Collection. I’ve already showed swatches of the lipsticks. Since I already love the original Heaux Lipstick, I had to get the new MAC Heaux and the dupe, MAC D for Danger. Check out my comparison here. I’m also in love with the new matte lipstick line, I will probably get more from that collection but so far I needed to get MAC Stone and MAC Whirl, since I’ve seen so many beautiful swatches of their lipliner variant. Ever since I’ve heard that scented Prep + Prime Fix+ would be released, I just completely flipped out. I loooooooove scented things, especially coconut/vanilla scented stuff. So I kinda splurged and bought three MAC Prep + Prime Fix+ in Coconut but also one MAC Prep + Prime Fix+ in Cucumber, which also smells very nice, I also like the Rose scent but I thought four would be enough for now. 😛 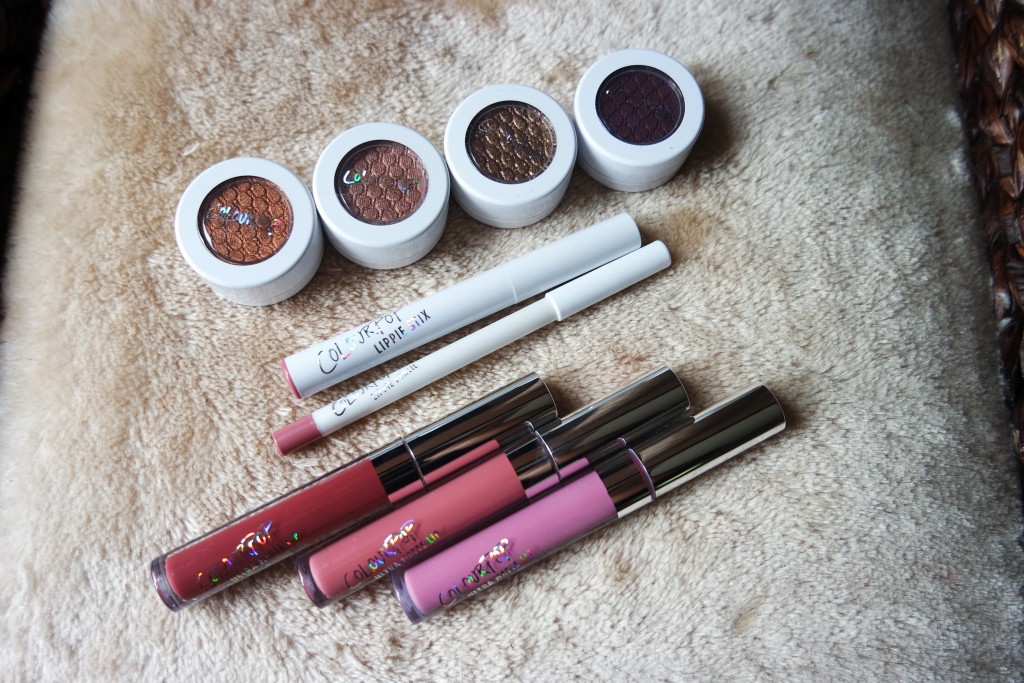 I’ve met someone reeeaaaaaaally lovely who went on holidays in the US. She offered me to let me order things and send them to where she was staying, so she could bring them back here. I was very excited since there are brands that do not offer international shipping at this time, so I gladly accepted her offer and got some stuff at Colourpop. Hermina, if you’re reading this, thank you so so so much! In that time, Colourpop just had released their Ultra Matte Lip Liquid Lipsticks, I was able to get the shades  Tulle, Solow and Seesaw. I was also curious about their Lippie Stix and Lippie Pencils,  I’ve got both of those in the shade Lumière. This brand is also known for their Eyeshadow formula. I’ve purchased the shades Nillionaire, Game Face and La La. Since these are not available in the Netherlands, I won’t write a review. Let’s hope they will ship to here someday! 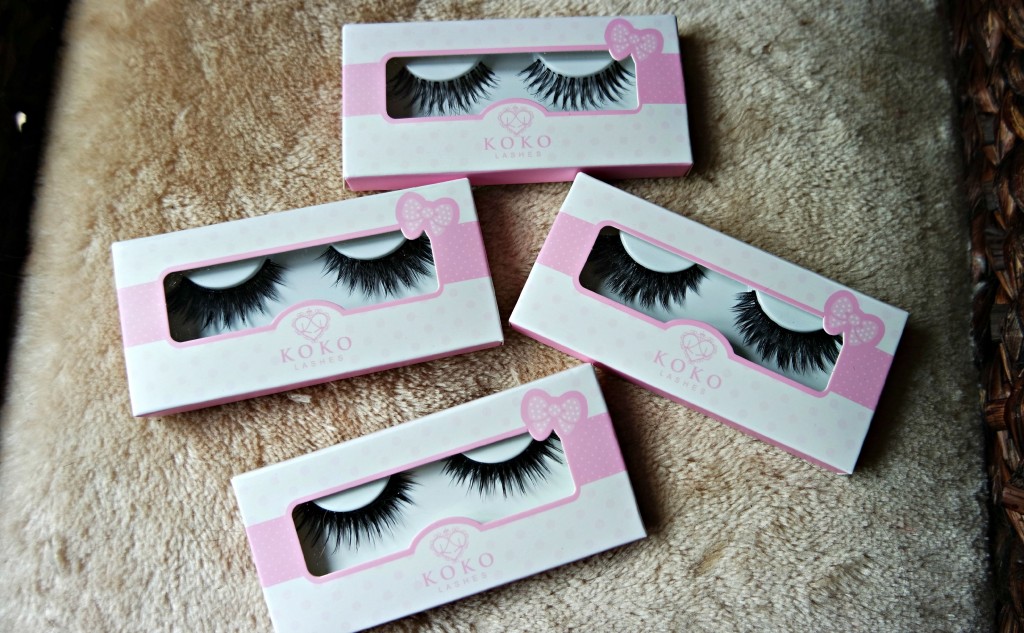 I’m currently obsessed with false eyelashes. I love my House of Lashes Falsies however, they are quite expensive. I’ve heard that KoKo Lashes were as beautiful as for a much afforable price. The KoKo Lashes are available at Lady Moss Beauty, which also doesn’t offer international shipping so I was happy to have an opportunity to order these lashes. I’ve got them in the style Goddess, Ariel and 501. The Goddess lashes are a dupe for the House of Lashes in Iconic, I’ve already compared them and they are very similar. The only difference that I can see is that these are more shiny. 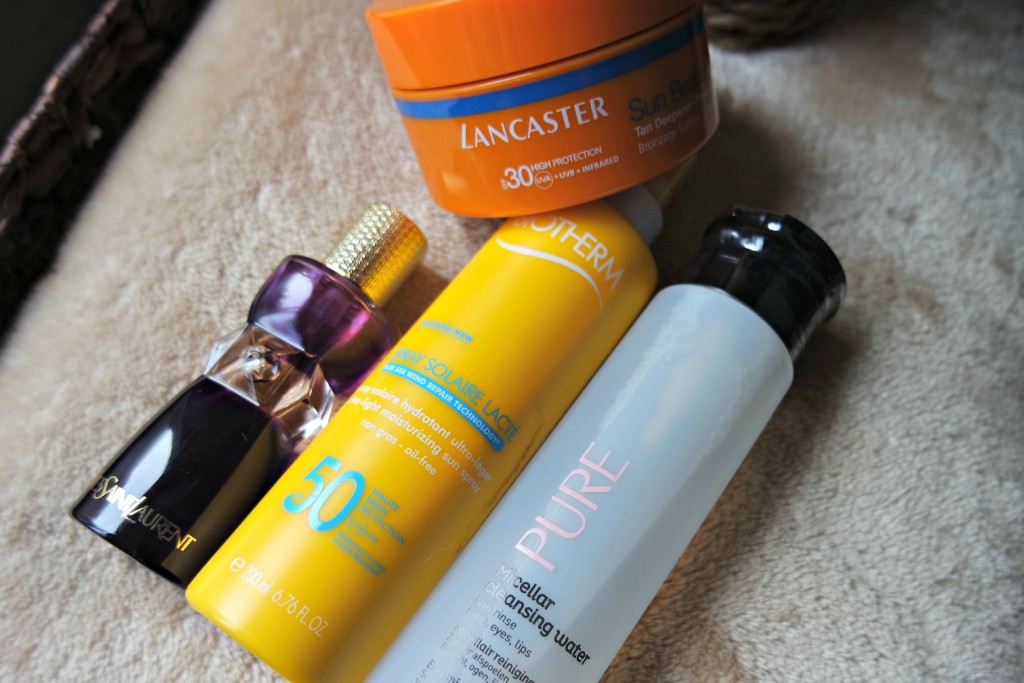 I’m going on holidays to Indonesia at the end of September, so I was looking for sunscreen. Luckily, since it’s the end of the Summer season, Ici Paris XL had a 40% discount on all sunscreen related items. I’ve purchased the Lancaster Sun Beauty Tan Deepener Tinted Sunscreen SPF30 for me and the Biotherm Spray Solaire Lacte SPF50 for my boyfriend. I also spotted the Pure Micellar Cleansing Water and since I was almost out, I just grabbed one of those. At Douglas, I’ve bought a gift for a friend and while I was picking that up, I noticed that Douglas had a 25% discount promotion for Yves Saint Laurent. I couldn’t resist and bought my favorite perfume, the Yves Saint Laurent Manifesto L’Élixir EDP. I’ve also got a nice make-up bag with a miniature mascara and eye pencil because of the promotion. 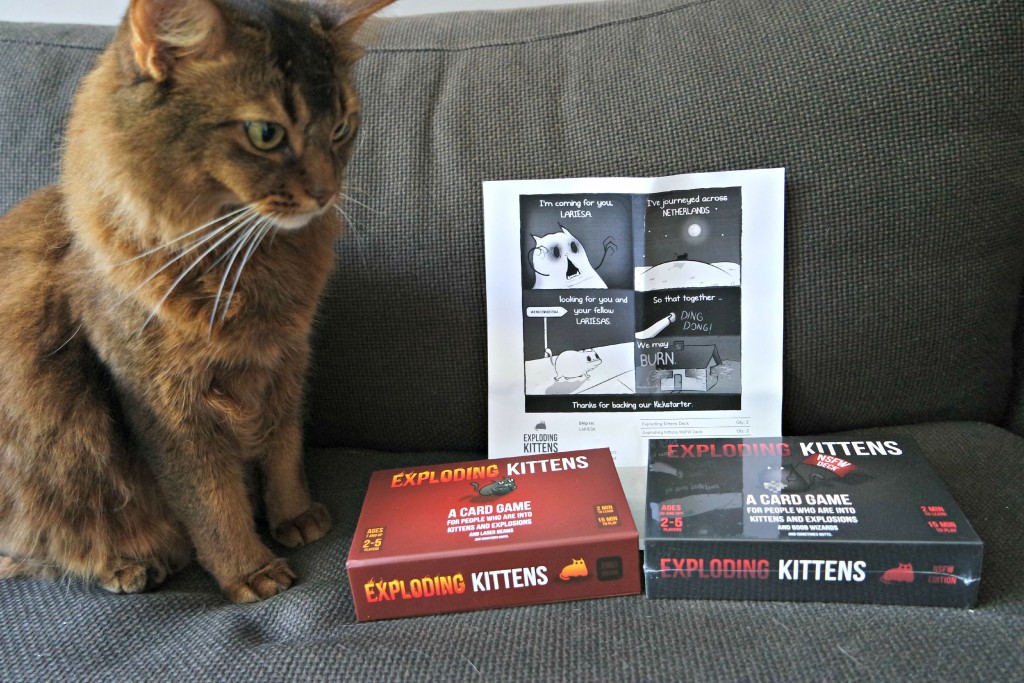 I’m a huge fan of The Oatmeal. Matthew Inman aka The Oatmeal has collaborated with Elan Lee and Shane Small to create a card game called Exploding Kittens. In January of this year, it was available through Kickstarter and was heavily supported by crowdfunding. After a huge success, the card game was finally made and I am now a proud owner of The Exploding Kittens card game. 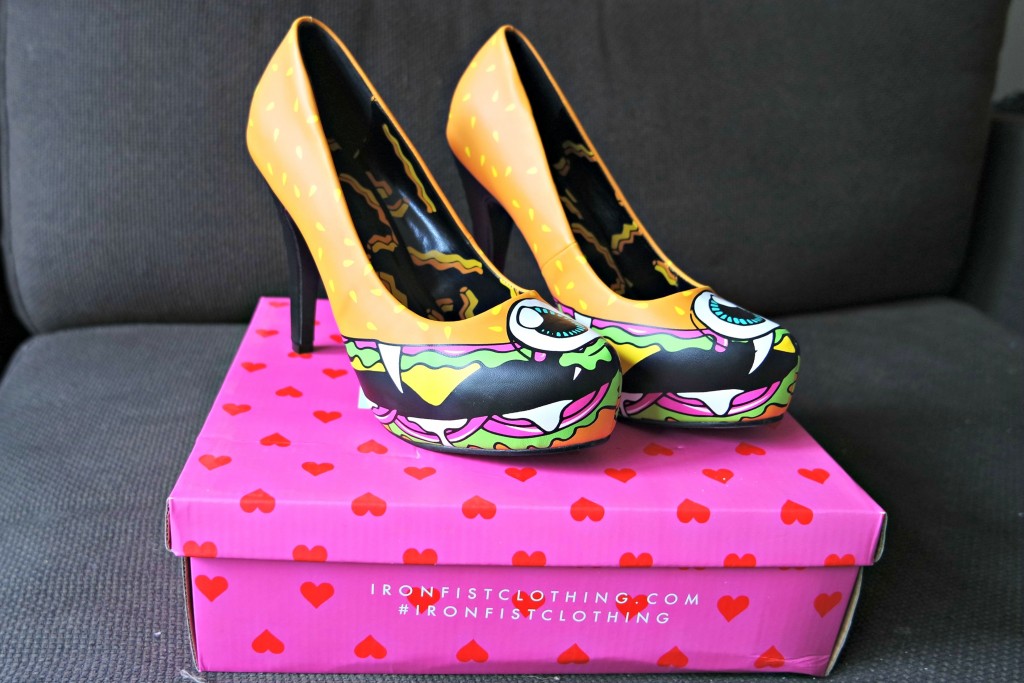 Ever since I looked at the Iron Fist Cycloburger Pumps, I fell heavily in love. I waited until Zalando had these babies on sale and finally, they were. I happily purchased these beautiful unique pumps, and I can’t even walk on them for more than five minutes BUT I DON’T CARE. I love them hahaha. ♥

I hope that you’ve enjoyed my make-up haul! I will review most of the things but let me know if you want something to be reviewed or if you have any suggestions for me that I need to get.

Did you get anything fun lately? Please let me know in the comments below!