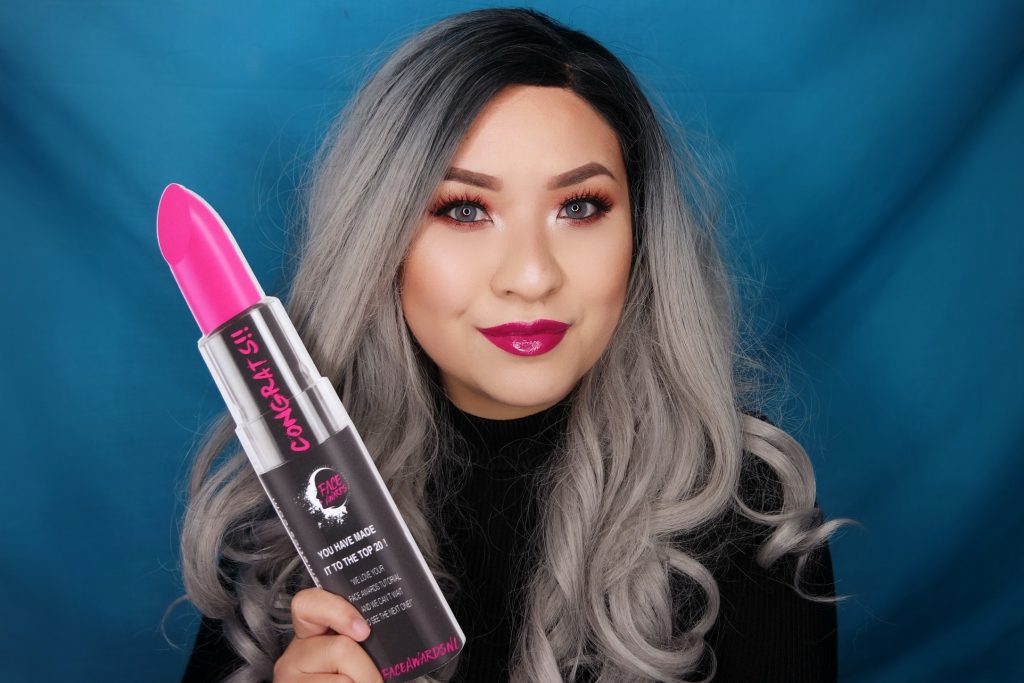 Hey everyone! As most of you who follow me on Social Media know already, I’ve made it to the NYX Professional Makeup Face Awards NL Top 20 of 2017!! Being in the Top 20 is already a huge achievement and I already feel like a winner since there were so many great entries. What’s even more amazing is that as a Top 20 Winner, I have received an amazing Goodiebox filled with lots of NYX products as well as other brands that are a part of L’Oréal. I’ve already unboxed the Goodiebox on Snapchat, but I also wanted to show you a nice overview of all the products in this post. 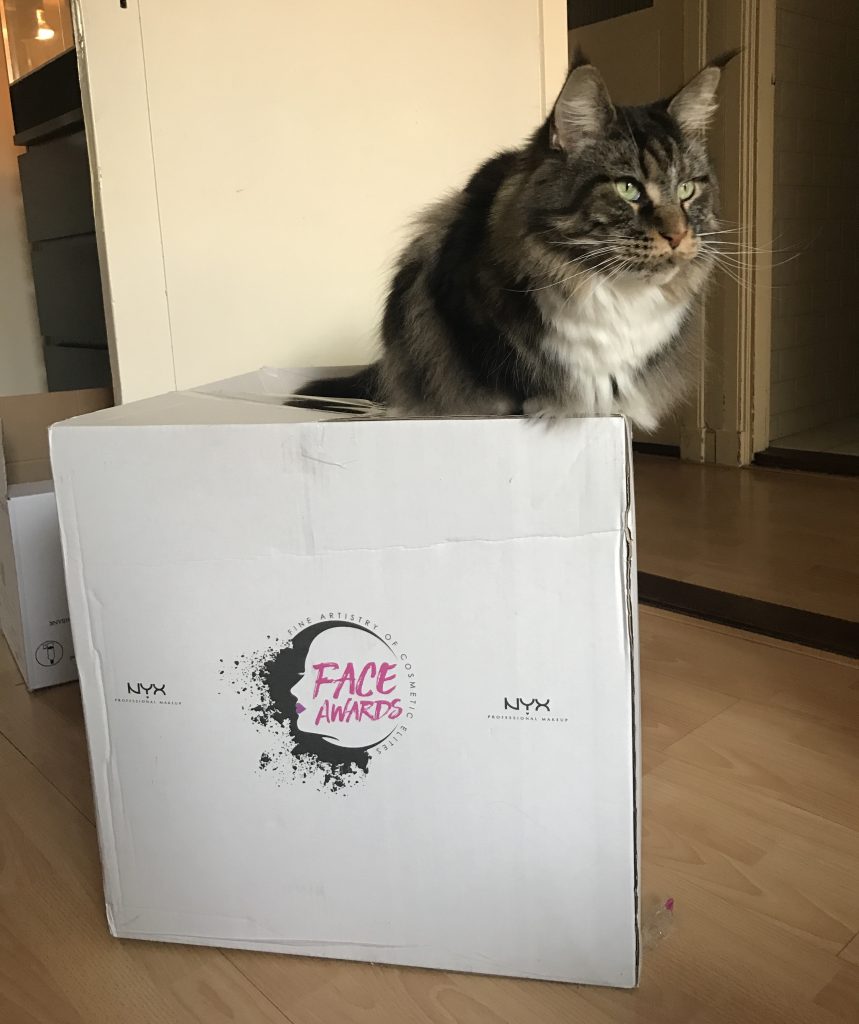 The NYX Professional Makeup Face Awards NL Top 20 Goodiebox was huge, about a quarter size of a door! It wasn’t completely filled to the brim though, it just looks really massive but there were still a whole lot of products in there! 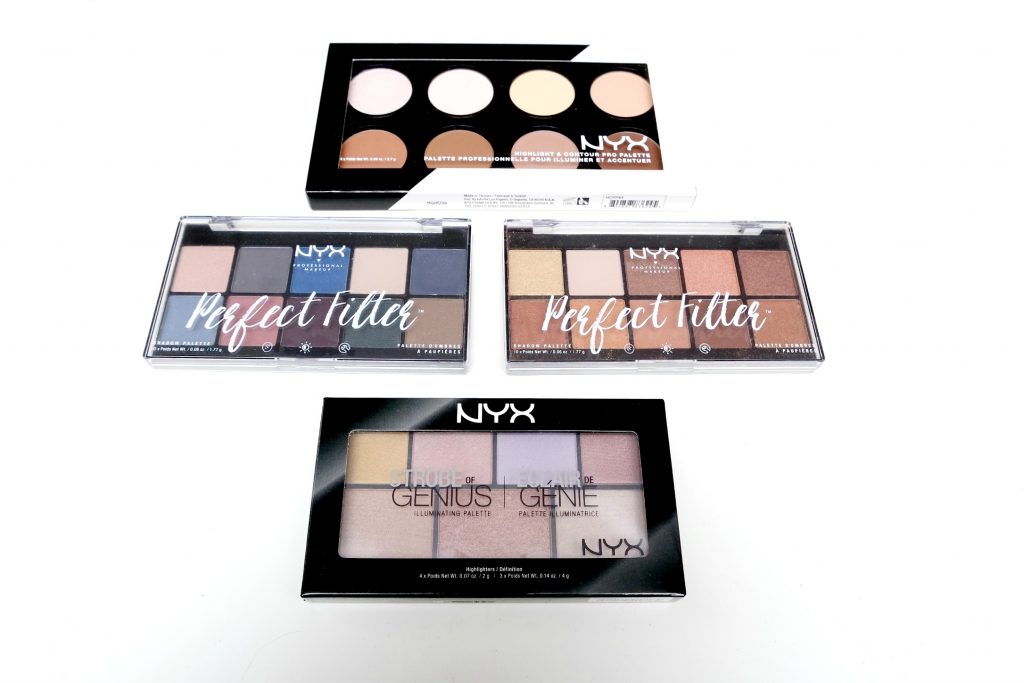 There were four palettes inside the box, which are the NYX Perfect Filter Shadow Palettes in Marine Layer and Golden Hour, the Highlight & Colour Pro Palette and the Strobe of Genius Illuminating Palette. 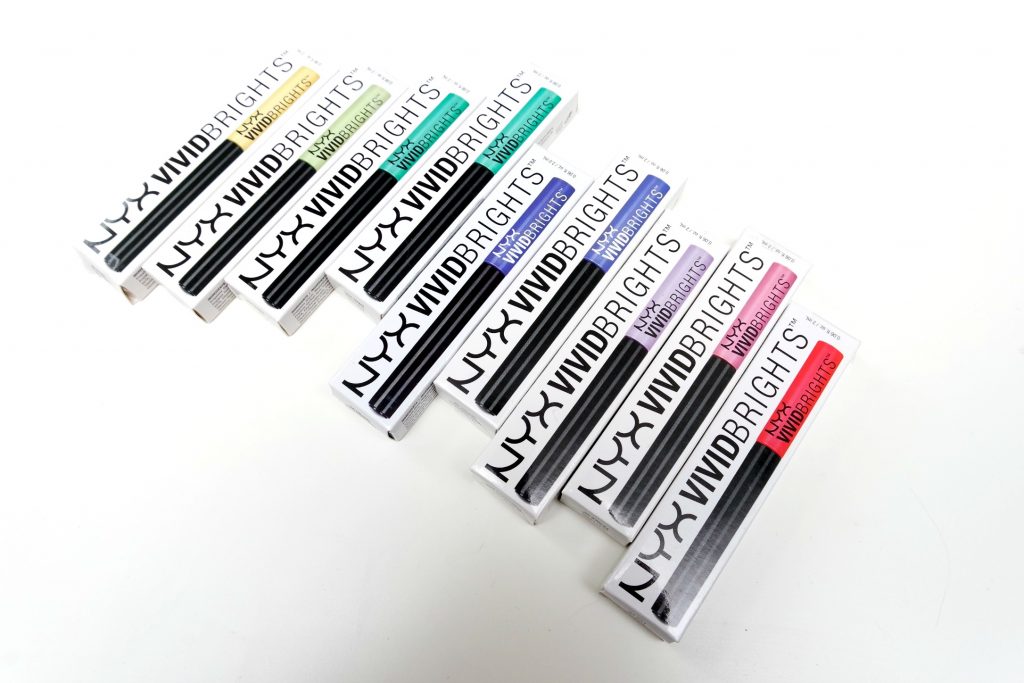 One of my favorite items in the box are the NYX Vivid Brights Eyeliners. I’ve received all shades in the collection, which are Vivid Halo, Vivid Escape, Vivid Envy, Vivid Sapphire, Vivid Blossom, Vivid Petal and Vivid Fire. For some reason, I’ve received doubles of the shades Vivid Envy and Vivid Sapphire. I don’t mind though, everything that I have double, I will put separate for a future giveaway! 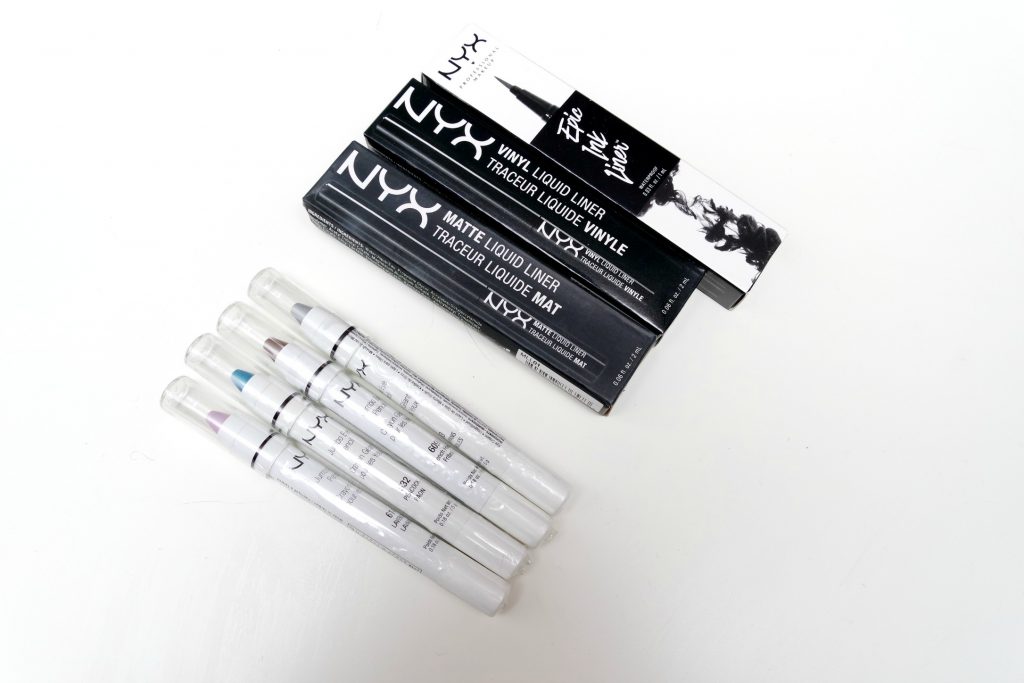 There were more eyeliners and pencils in the box, four of them being the NYX Jumbo Eye Pencil in the shades Lavender, Peacock, French Fries and Pots & Pans. There were also three black eyeliners in there with their own formula, which are the NYX Matte Liquid Liner, Vinyl Liquid Liner and the Epic Ink Liner. 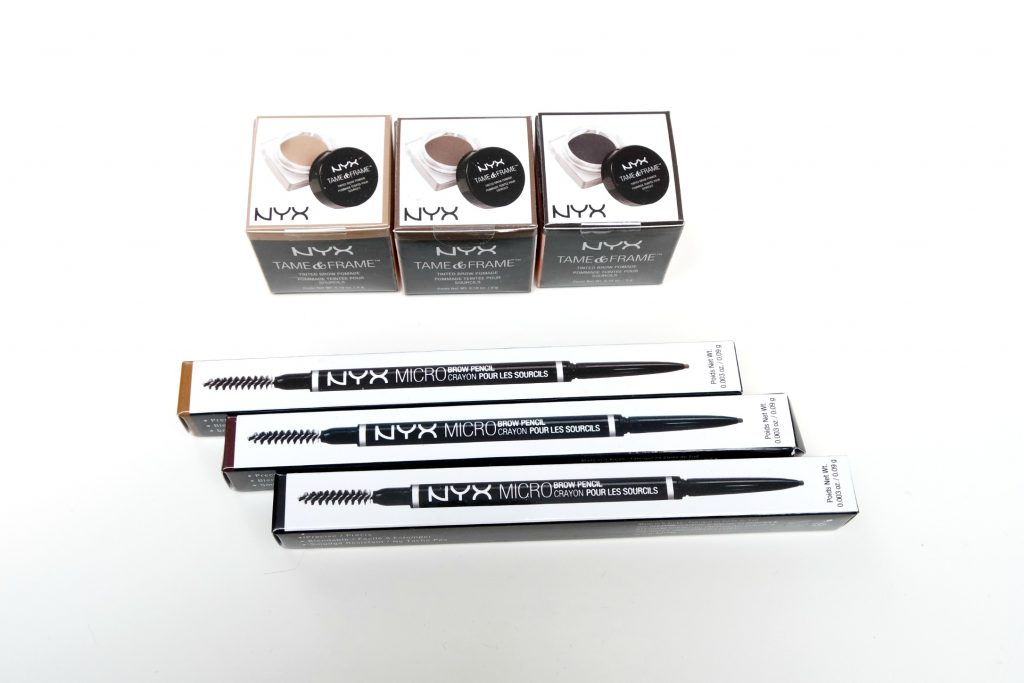 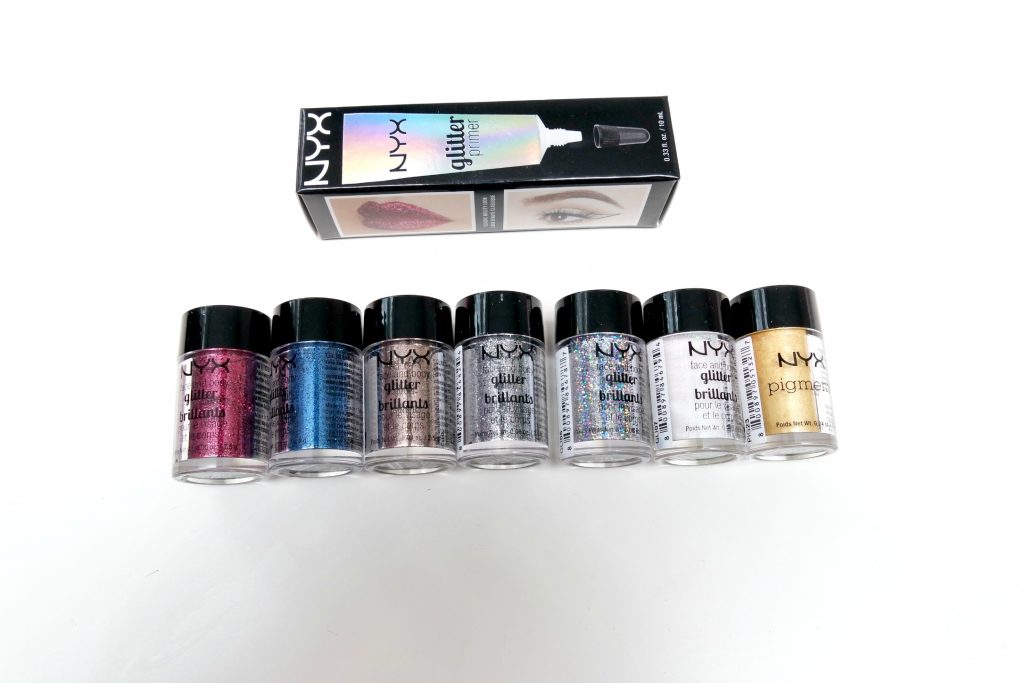 Another of my favorite products inside the Goodiebox are the NYX Glitter Brilliants. I received six shades, which are Red, Blue, Bronze, Silver, Crystal and Ice. I’ve also received one of the NYX Pigments in the shade Go H.A.M.. Thankfully, there is also a NYX Glitter Primer included in the box, heard some great things about it! 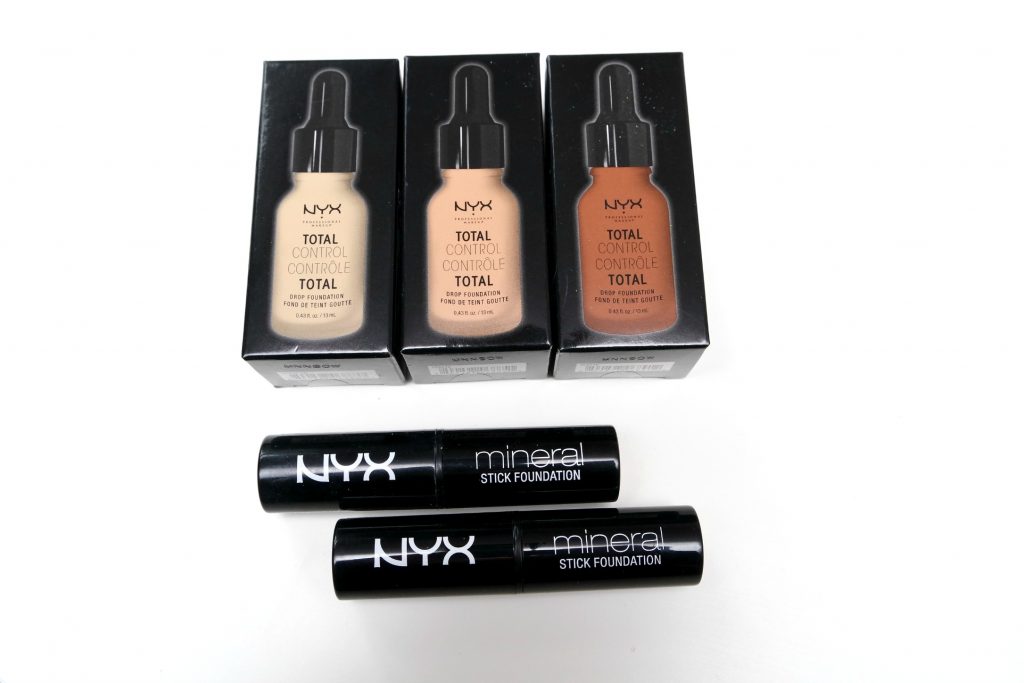 There were also a couple of foundations in the Goodiebox, three shades of the NYX Total Control Drop Foundation in Buff, Classic Tan and Deep Sable and two shades of the Mineral Stick Foundation in the shades Light and Caramel. I don’t really know what to make of these products, I think Light is a good shade for me and Buff will probably be okay for my Summer tanned skin, but I have no idea what to do with the other darker foundations. I can probably use the more deeper shades as a contour however, I have so many other products which are easy to use for that purpose, so I will probably give the other shades away too. 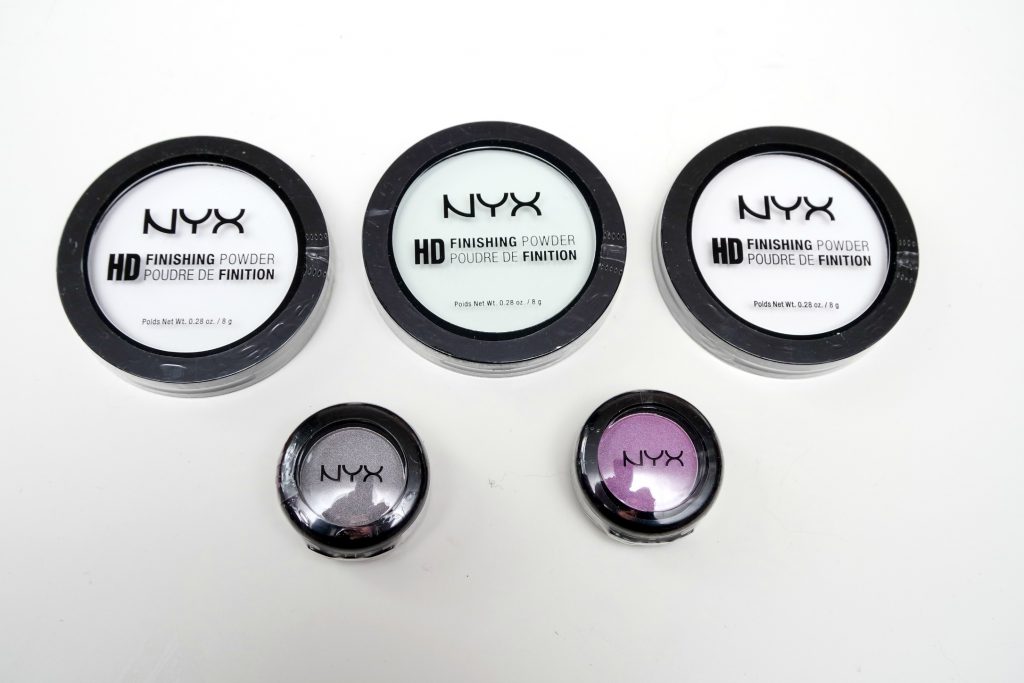 A few compact powder products were inside the Goodiebox, three NYX HD Finishing Powders, one in the shade Mint Green and one in Translucent. Another double product which will go to a future giveaway! Translucent powders always come in handy but not sure how I will like the Mint Green shade, it’s probably for reducing redness but it is probably covered up by foundation and concealer anyway, so I don’t really find a use for the shade, but we’ll see! The other two products are the NYX Hot Singles Eye Shadows in Bling and Harlequinn. 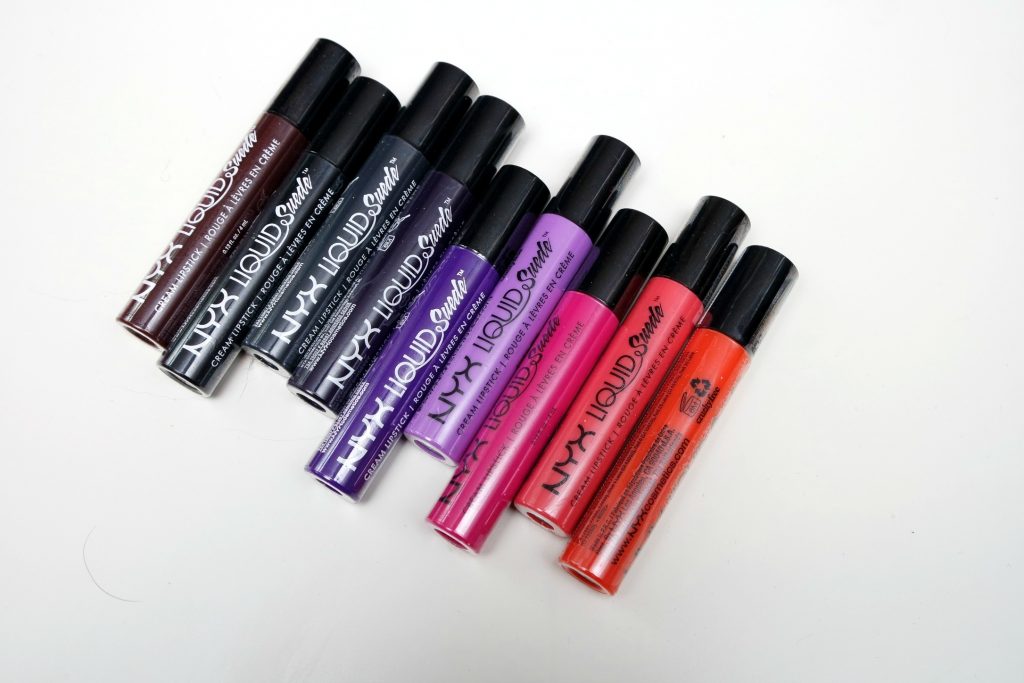 I’ve received a whole bunch of the NYX Liquid Suede Cream Lipsticks, nine in total in the shades Club Hopper, Alien, Stone Fox, Foul Mouth, Amethyst, Sway, Pink Lust, Life’s a Beach and Orange County. I probably own all of the shades already, since I purchased a limited edition miniset containing all the shades a few months ago, so all of these will probably also go into a future giveaway! 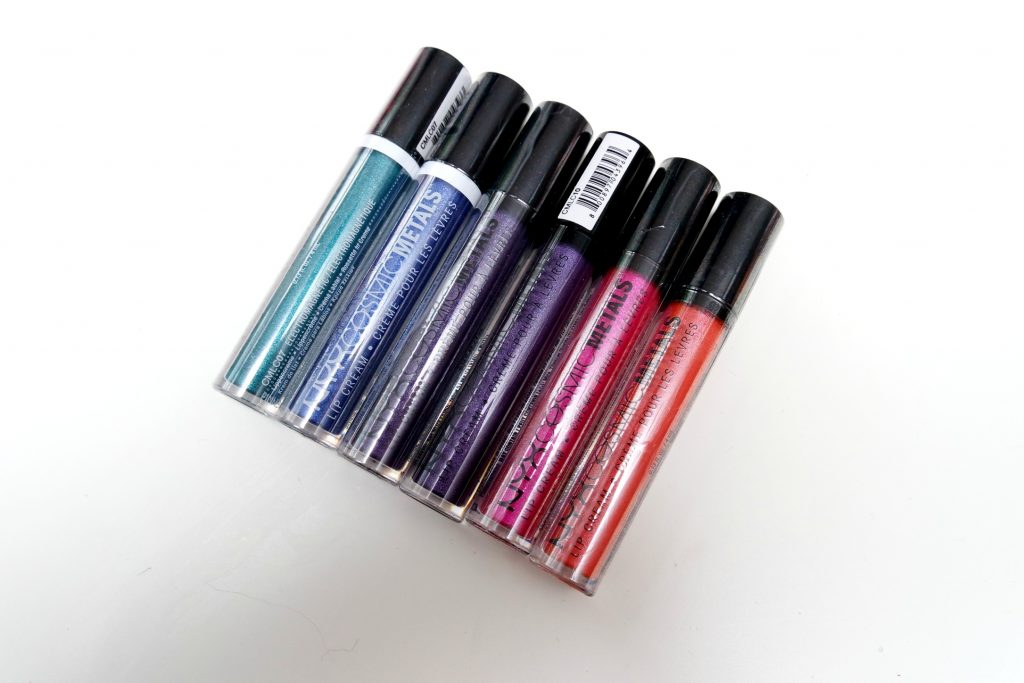 Another cool product where I received a bunch of are the Nyx Cosmic Metals Lip Creams, five in total in the shades Out of this World, Celestial Star, Ultraviolet, Fuchsia Fusion and Solar Energy. Again received a double shade, which is Ultraviolet. The giveaway is definitely going to be big! 😉 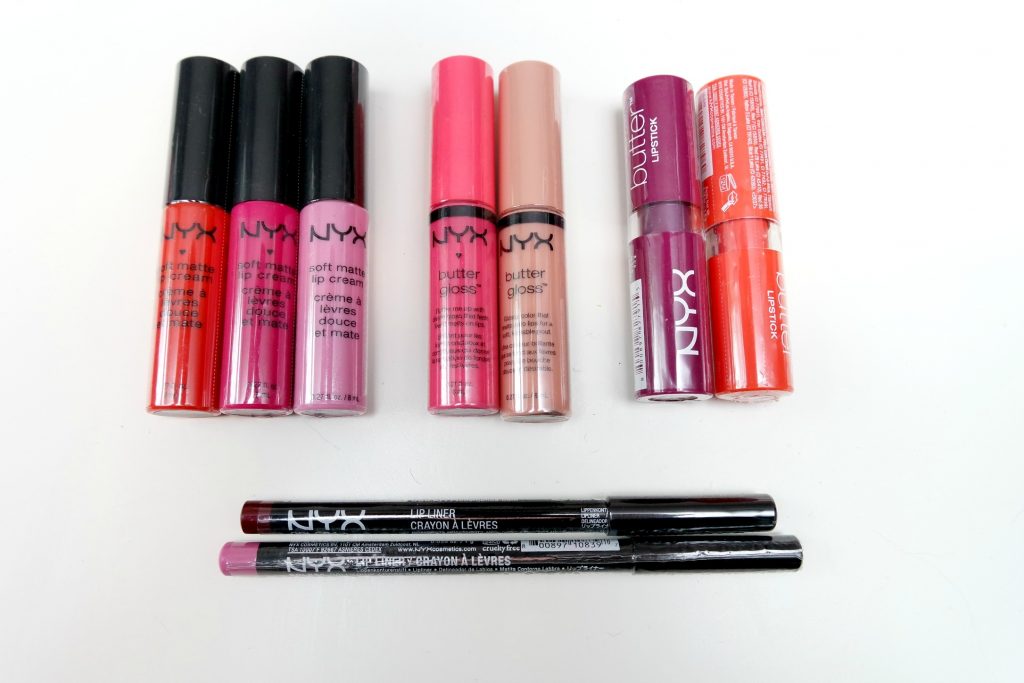 Here’s another selection of lip products that were inside the Goodiebox, three NYX Soft Matte Lip Creams in Morocco, Addis Ababa and Sydney, two NYX Butter Glosses in Cupcake and Fortune Cookie, two NYX Butter Lipsticks in Hunk and Bonfire (hello perfect Kingsday lippie!) and two NYX Lip Liners in Auburn and Dolly Pink. No idea why these have different sizes by the way! 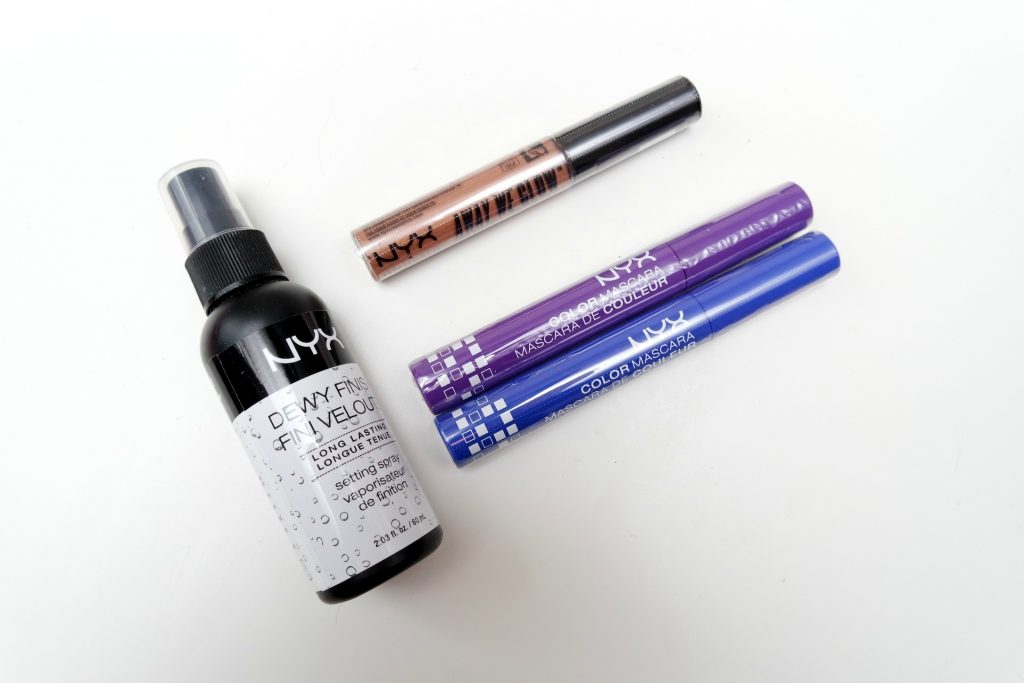 Some random products that were inside the Goodiebox are the NYX Dewy Finish Long Lasting Setting Spray, the Away We Glow Liquid Highlighter in Gold Rush and two Color Mascara’s in the shades Purple and Blue. 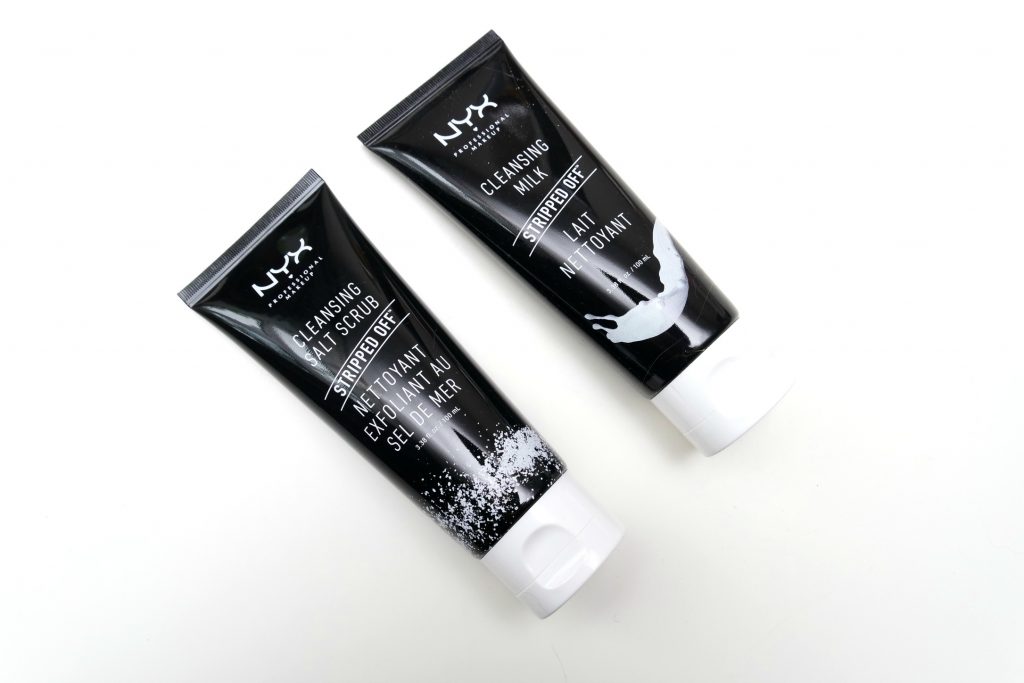 The last of the NYX products are two cleansers, the Cleansing Salt Scrub and the Cleansing Milk. I didn’t know that NYX also sold cleansers, which always come in handy so I’m definitely curious to try out these! 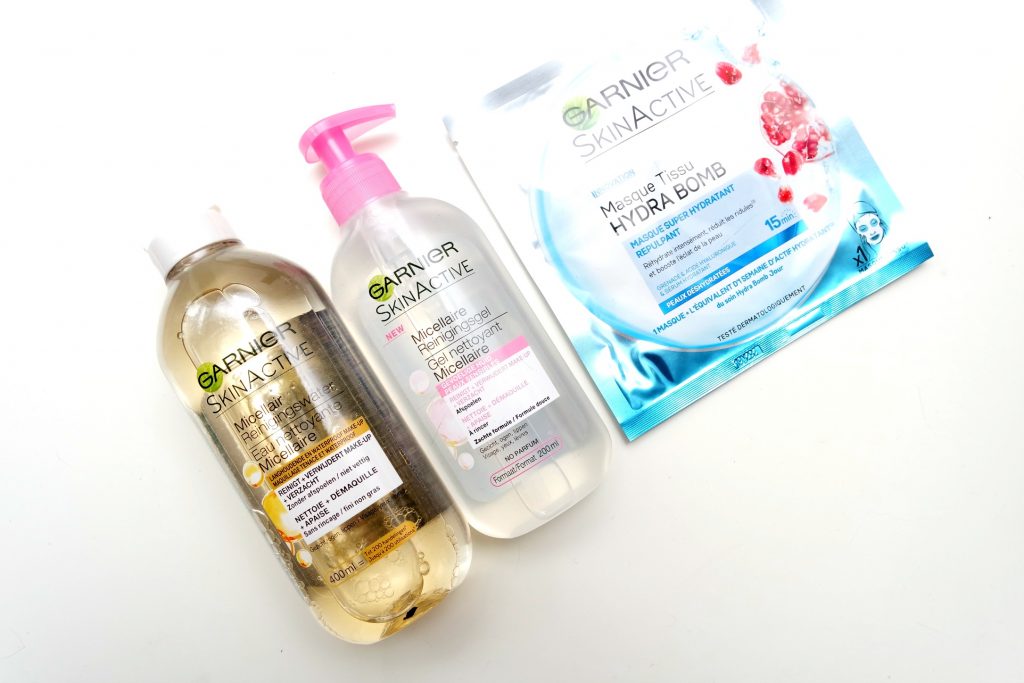 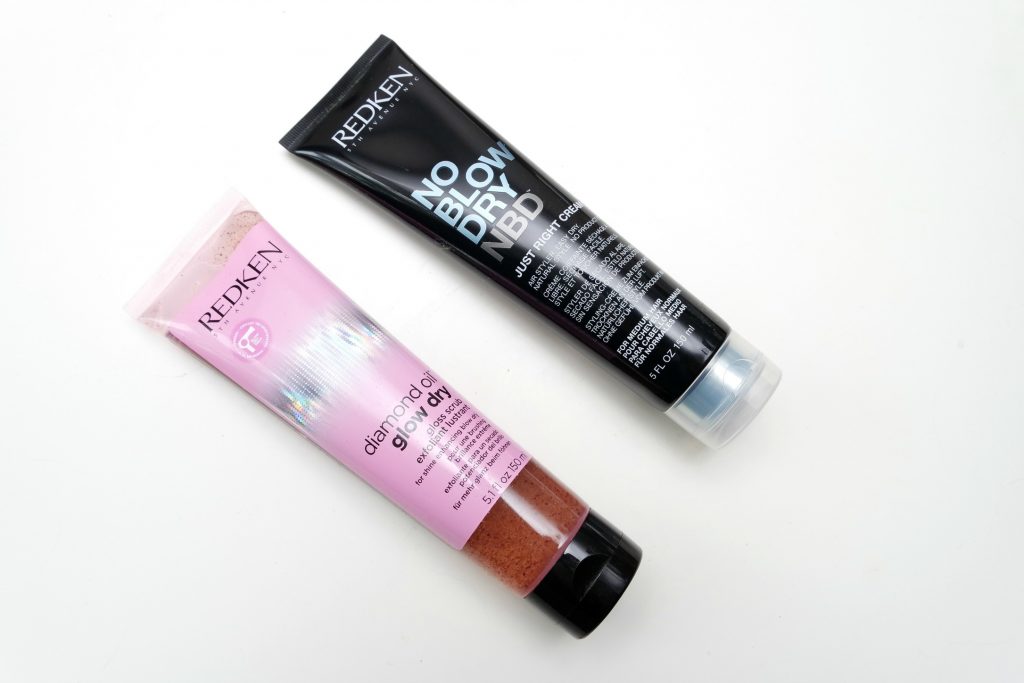 The last products inside the Goodiebox are from the hair brand Redken, which ar the Diamond Oil Glow Dry Gloss Scrub and the Now Blow Dry Just Right Cream. Again, two very interesting products from a brand that I’ve never tried before. 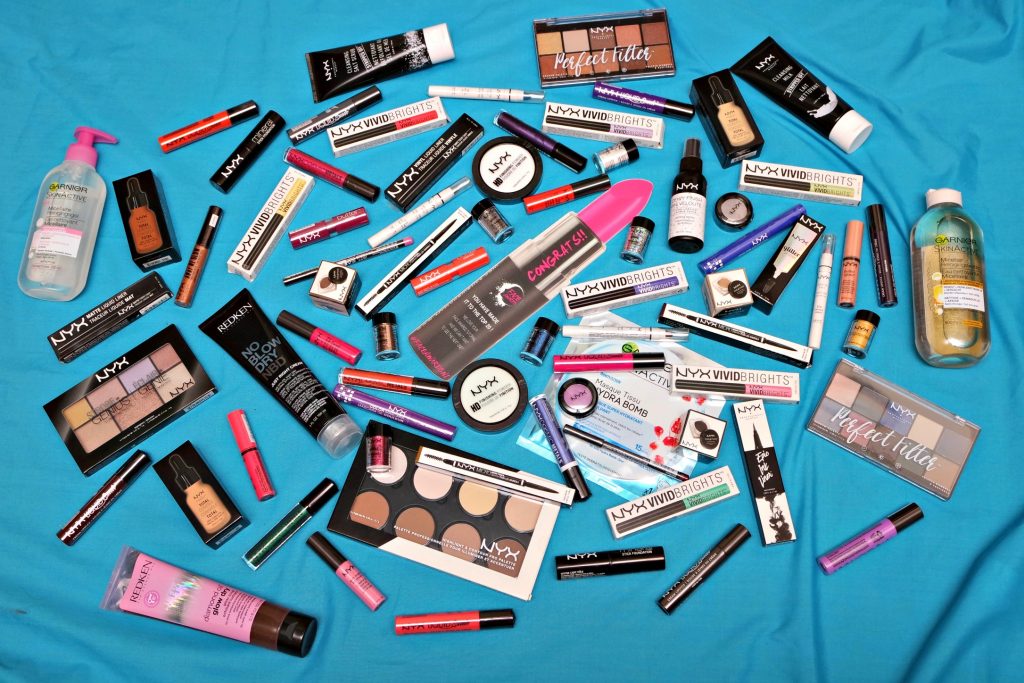 I can’t believe how many products that were inside the NYX Professional Makeup Face Awards NL Top 20 Goodiebox! Like I said before, I feel like a winner already and I’m so happy and lucky to be able to join a contest that is so much fun. I’ve already created my second look, which is or the First Round Challenge themed Color Explosion. As you can see, I’ve received a lot of colorful products to use so I’m really excited to show you my next video! Need to edit a lot of footage first so hopefully it will launch on my YouTube Channel tomorrow!

Which product do you find most interesting?