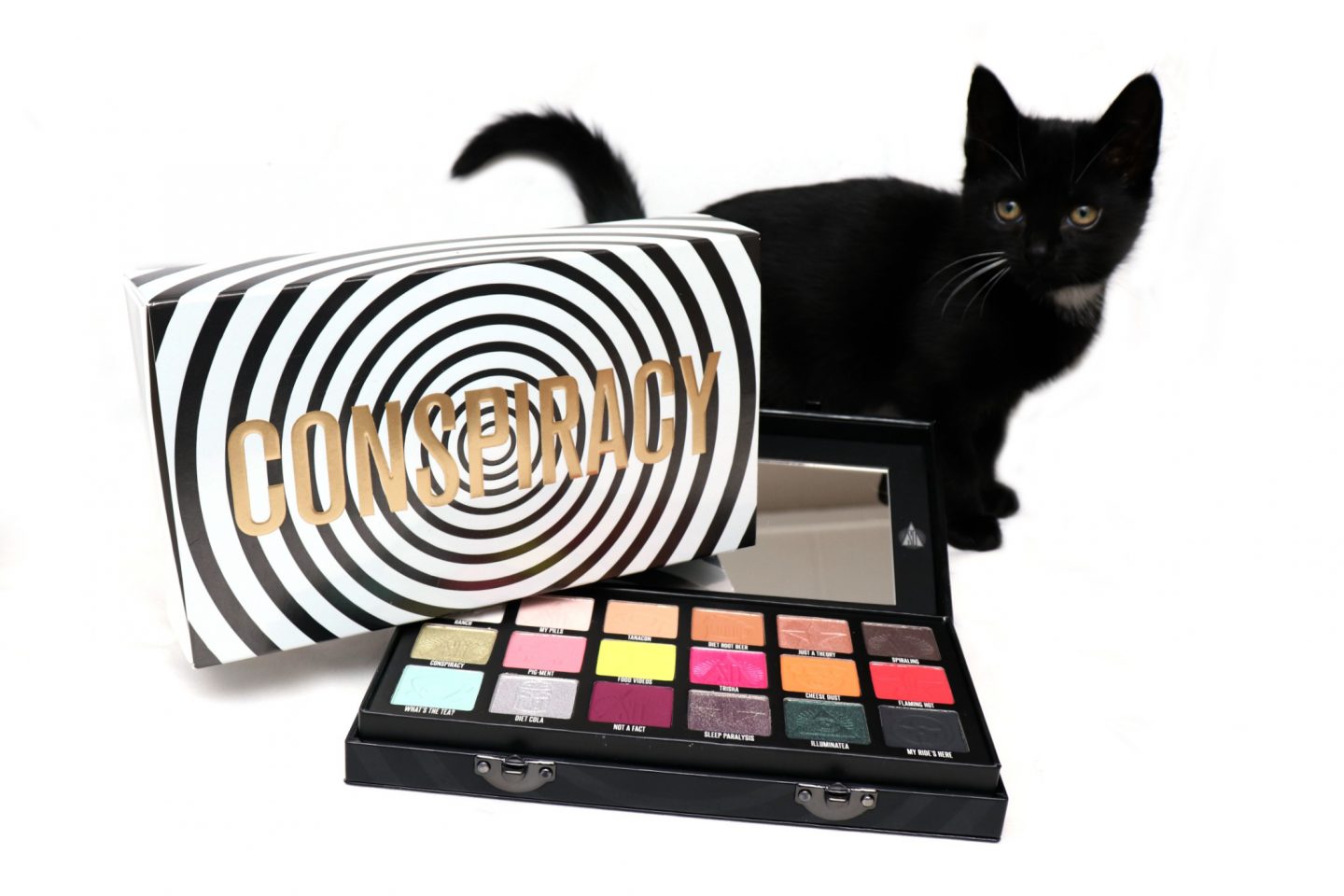 The most influential duo Shane Dawson and Jeffree Star have finally collaborated, creating the Jeffree Star Cosmetics Shane x Jeffree Conspiracy Collection and breaking the internet upon its release. The star product of the collection is the Conspiracy Palette, featuring 18 matte, metallic and foil eyeshadow and pressed pigment shades. I’m going to review, swatch and create a look using the palette in today’s post. 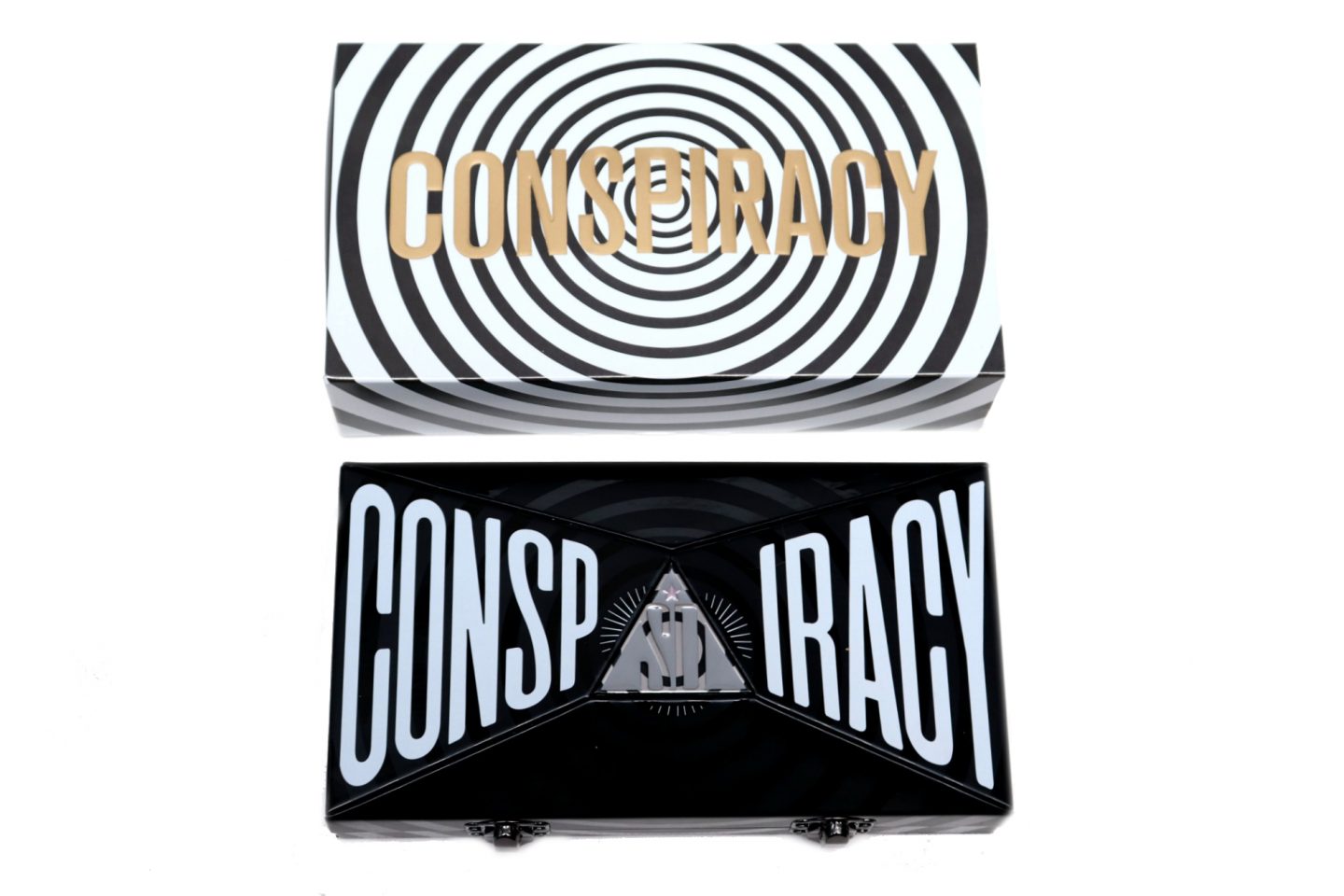 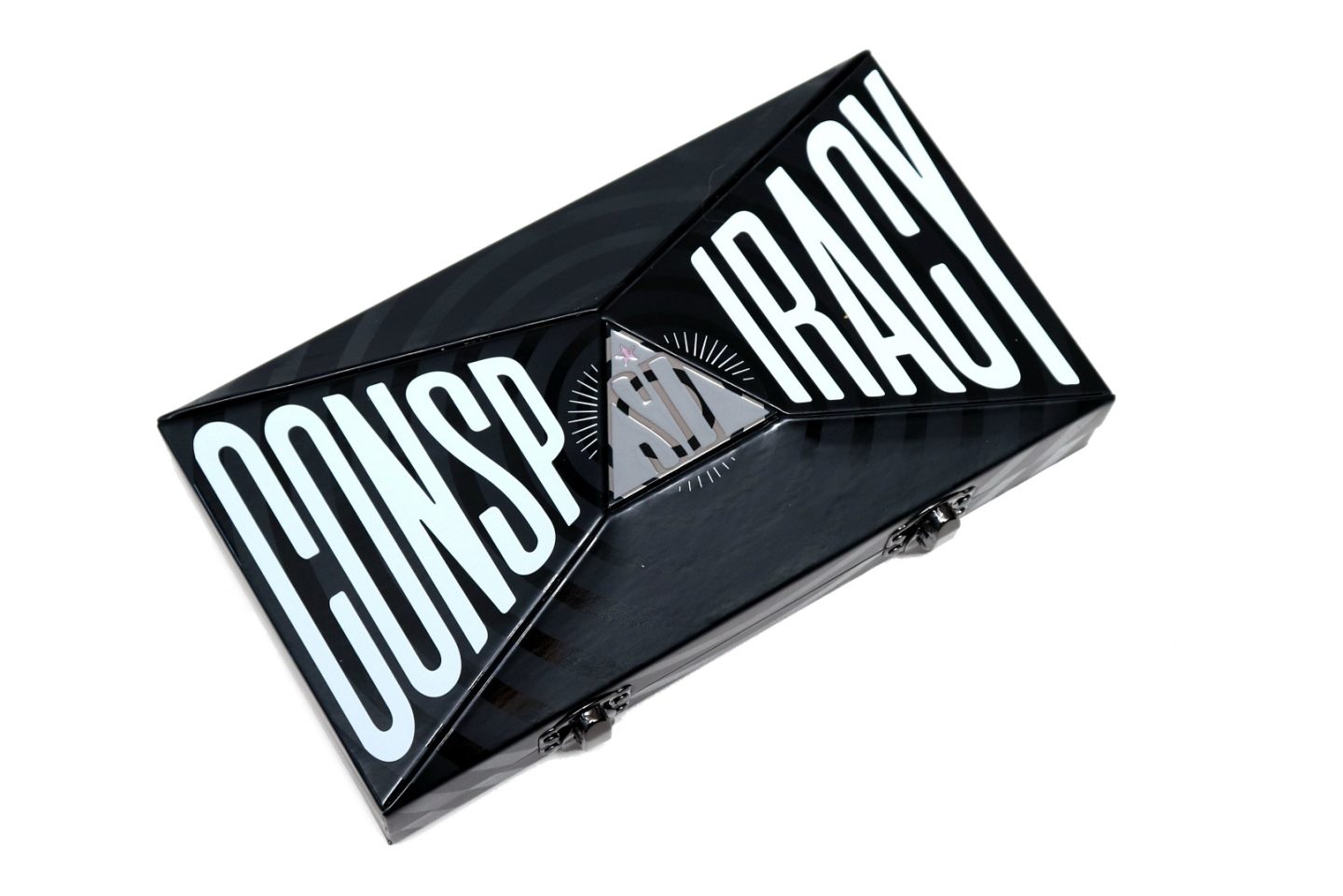 The Shane x Jeffree Conspiracy Palette comes in a sturdy cardboard Coffin combined with a sleeved box with a hypnotizing, spiraling background. The entire process of creating the palette from start to finish was documented in the The Beautiful World of Jeffree Star series on Shane’s YouTube Channel. I really appreciated the series because it showed the entire timeline and every little detail on creating the collection, from prices to the packaging, color picking and marketing. The series is basically the reason why I’m so hyped and got the palette in the first place.

The palette’s exterior was majorly discussed, with Shane and Jeffree not liking the initial prototype ideas to what it is now, with beautiful details such as the pyramid-like shape having Shane’s and Jeffree’s logo in the middle and gunmetal clips. I think the packaging turned out gorgeous. I’m someone who really is into packaging and this palette feels heavy, luxurious and well thought out. 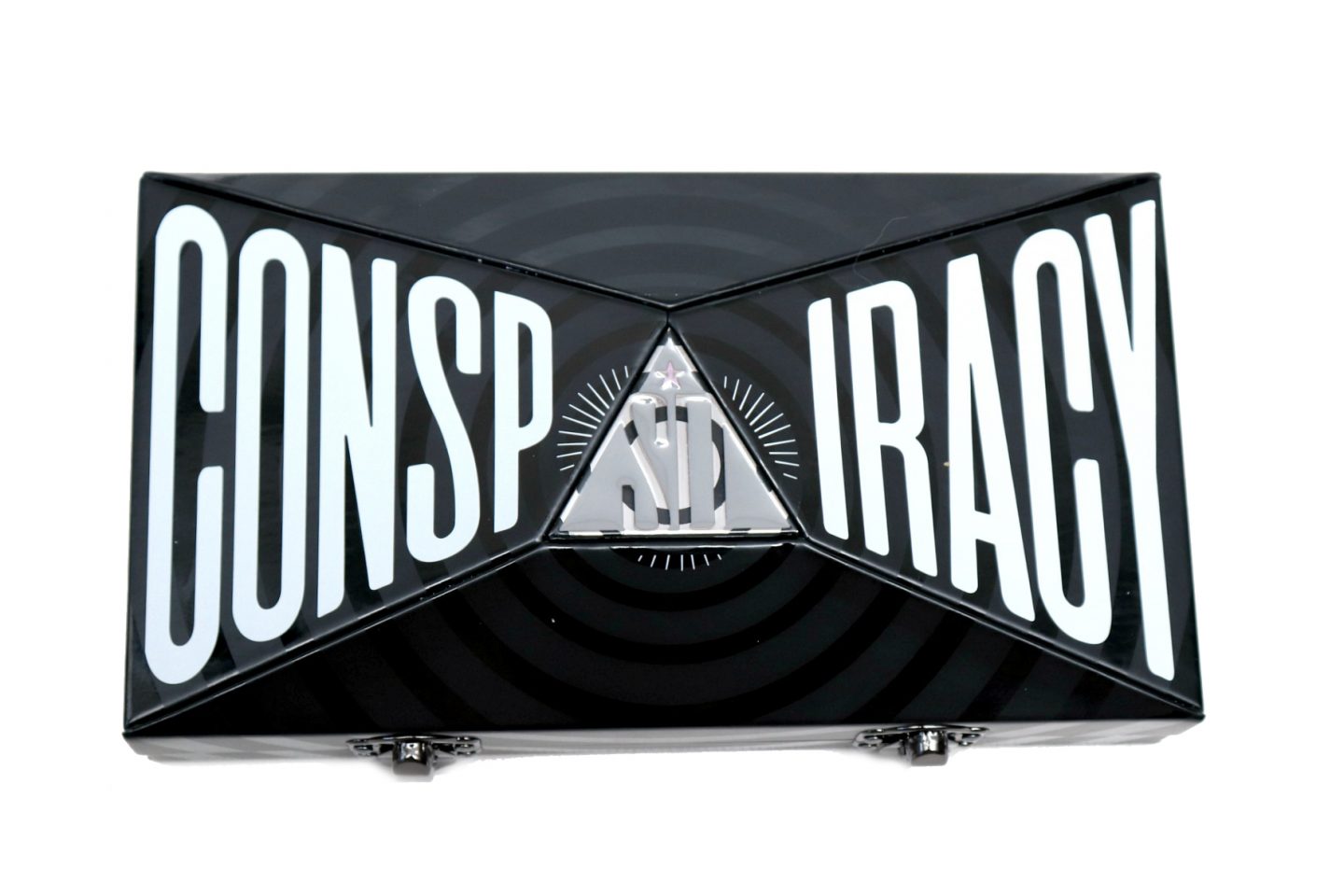 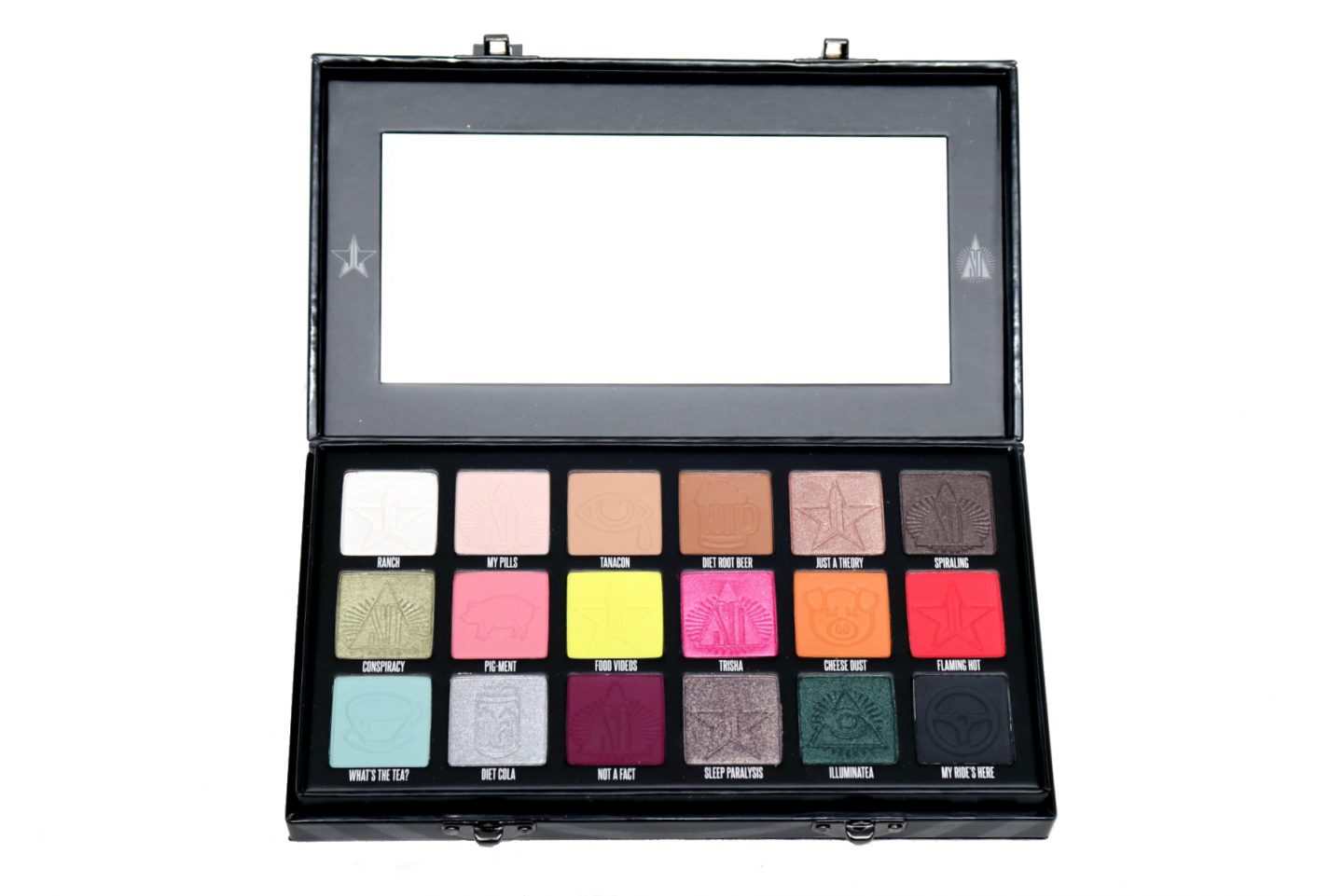 The Shane x Jeffree Conspiracy Palette can be opened by clips on the side like a jewelry box. The inside has a mirror with Jeffree’s and Shane’s logo on the side, and the 18 shades in square pans, holding 1.5 grams of product each with their names on the bottom. I love palettes that have the names directly near the shades. I always lose loose sheets with names and I don’t like constantly looking at the back of the palette to check out the shade names.

I’m not a long-time fan of Shane Dawson, I subscribed after his series with Jeffree so I’m not familiar with all the shade names and how it relates to Shane, but I’m sure that his fans will completely love the shade names. I’m just very excited about the imprints that the shades have. It is such a cute little detail that I can appreciate so much, from the little pigs, to the tea cup and Illuminati design. It makes the palette so special and unique to Shane. It is however really unfortunate that the imprints will fade as soon as you’re using the palette. 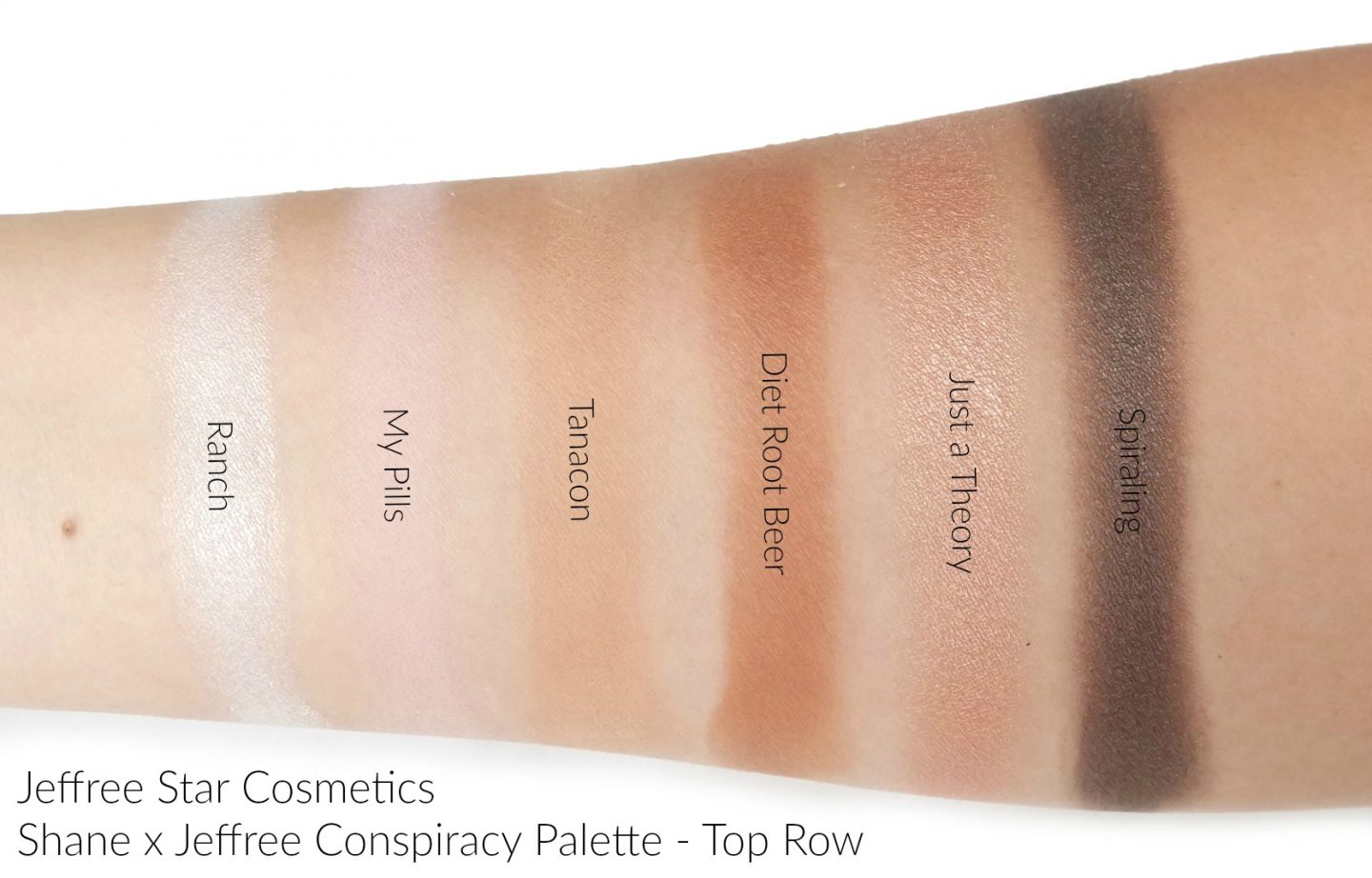 Here are swatches of the top row, with the shades described as follows:

Here are swatches of the middle row, with the shades described as follows:

Here are swatches of the bottom row, with the shades described as follows: 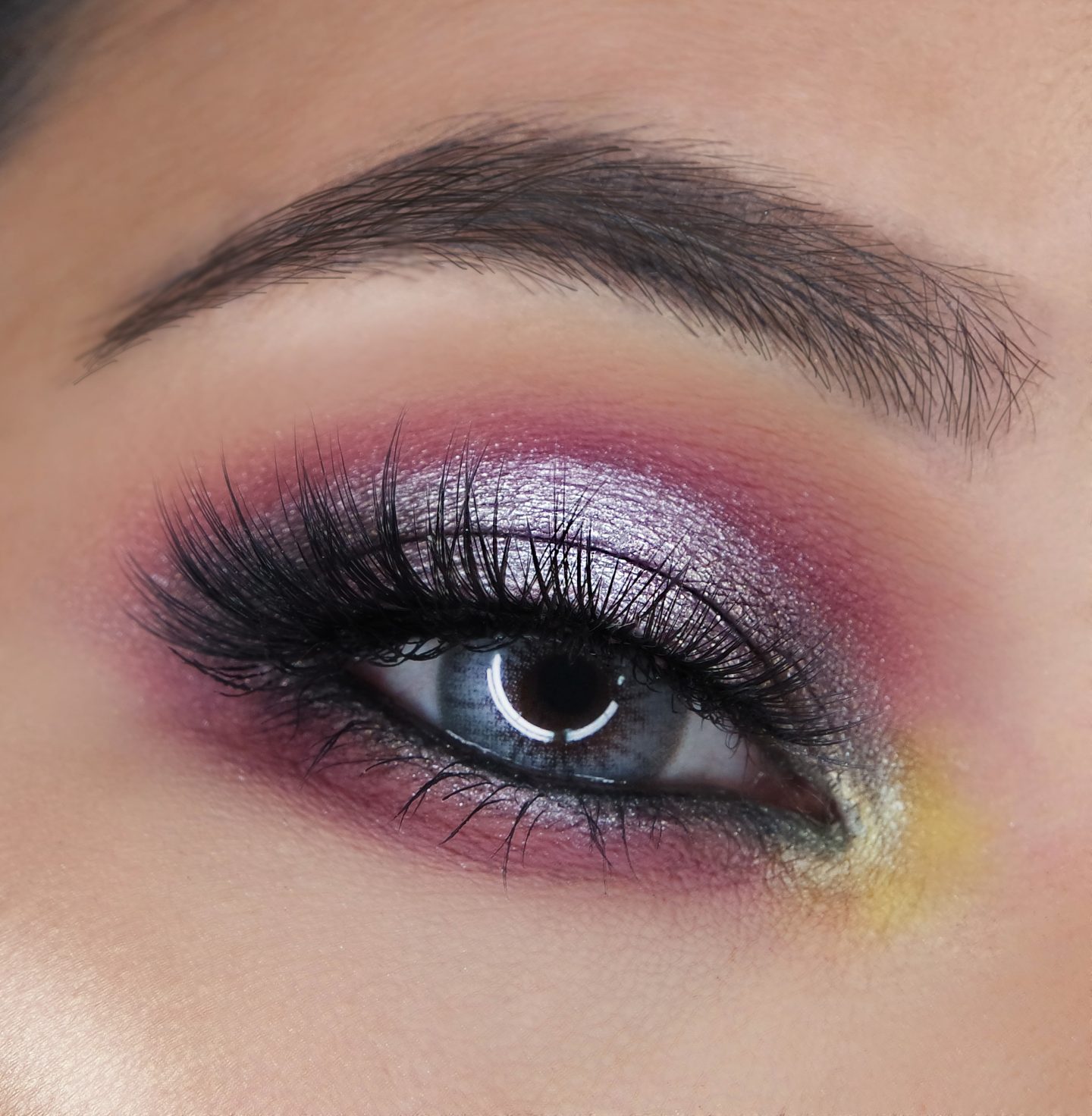 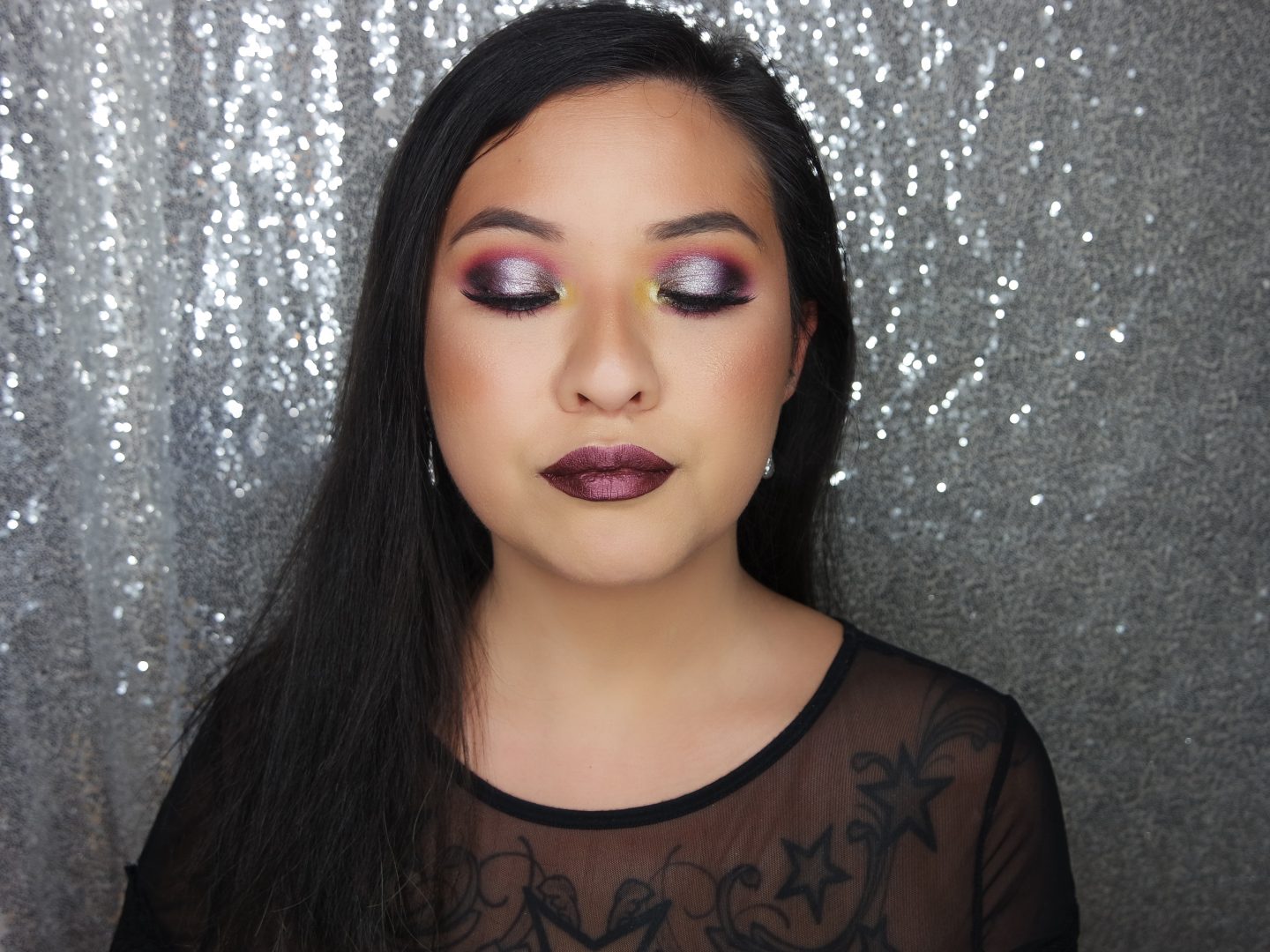 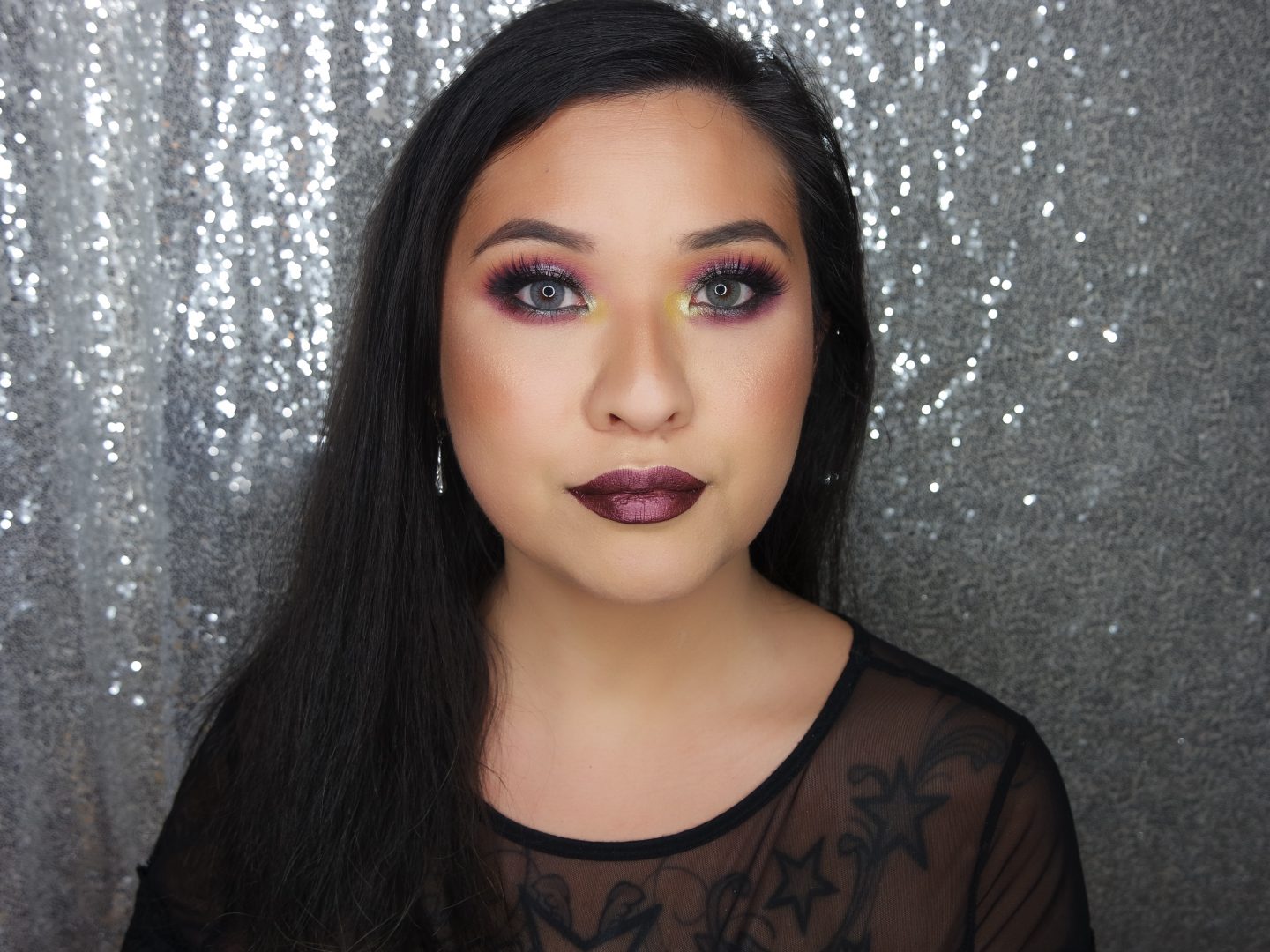 I really love how this look turned out but I do have to say that some of the shades stung my eye when I used it on my bottom lid. I don’t know if I’m sensitive to a type of ingredient in the metallic shades, but the shades that stung were SPIRALING, SLEEP PARALYSIS and DIET COLA. I really was surprised and confused by the stinging so I actually applied these shades again over several days on my bottom lid/lashline area, and I confirmed that they all stung on me. It doesn’t leave any irritation other than stinging during the initial application but I would suggest to be careful applying these shades on the sensitive area of your eyes.

Overall, the shades inside the palette swatched and performed great. They are beautifully pigmented, feel soft, are easy to apply without any patchiness and are easy to blend and combine. Some of the shades produce some kickback and fallout but I don’t mind that. I always tap my brush before applying it on my eyes which minimizes fallout. 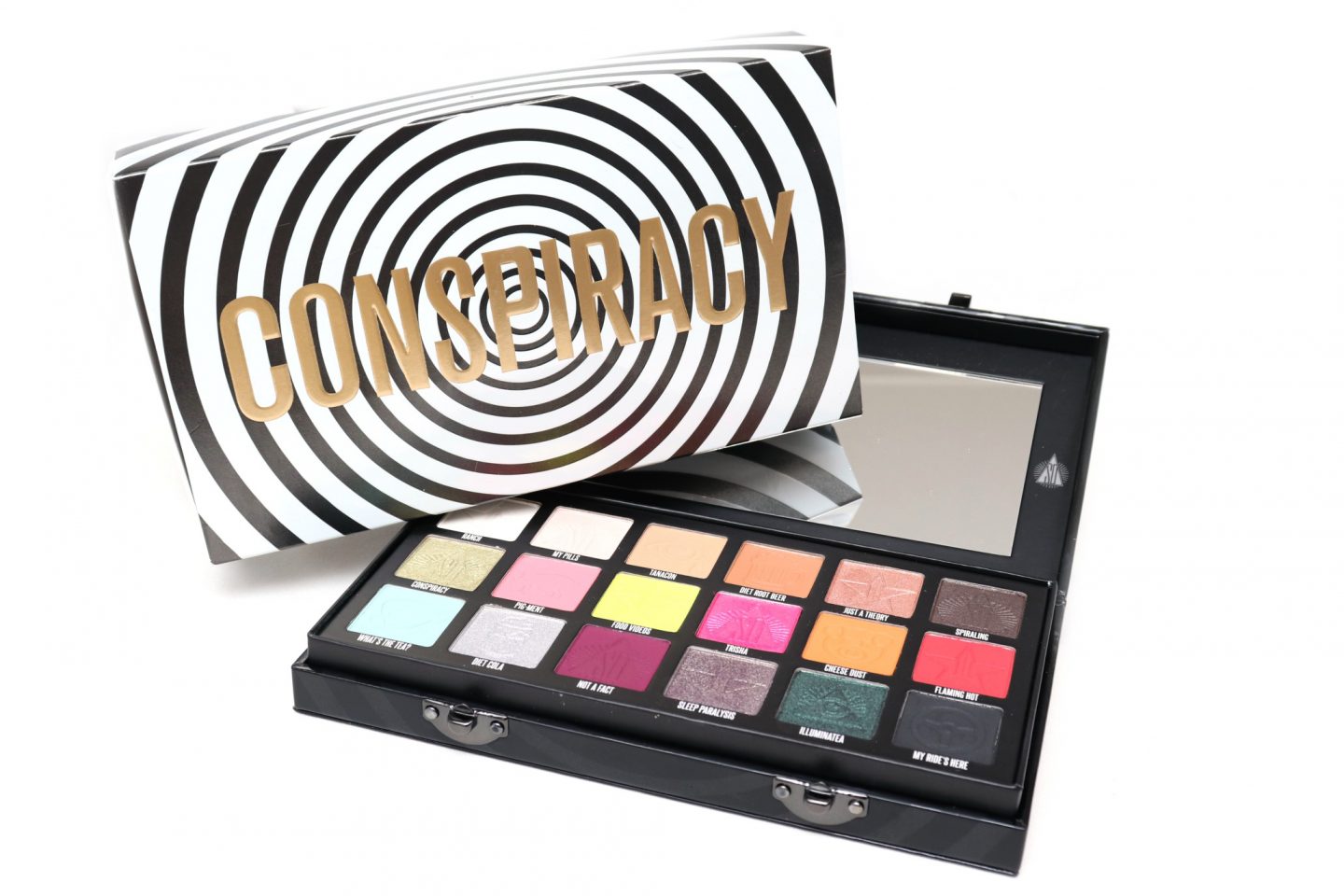 When I first saw the revealed shades of the Shane x Jeffree Conspiracy Palette, I was a bit disappointed because the shades looked so unusual and difficult to combine. However, seeing the palette up close, I now see many different possibilities, from heavy to smokey make-up looks to natural. I’m really happy to have this palette because the packaging is bomb and a lot of the shades are so unique and new to my already big make-up collection. The entire team has put a lot of heart and soul into the collection.

I think this palette is definitely a must-have for fans of Shane Dawson and to those who like more unique palettes with daring shades. The quality amazing like expected from Jeffree Star products. If you’re a neutral/safe type of eyeshadow person that isn’t really into Shane or Jeffree, this palette might not be interesting for you. 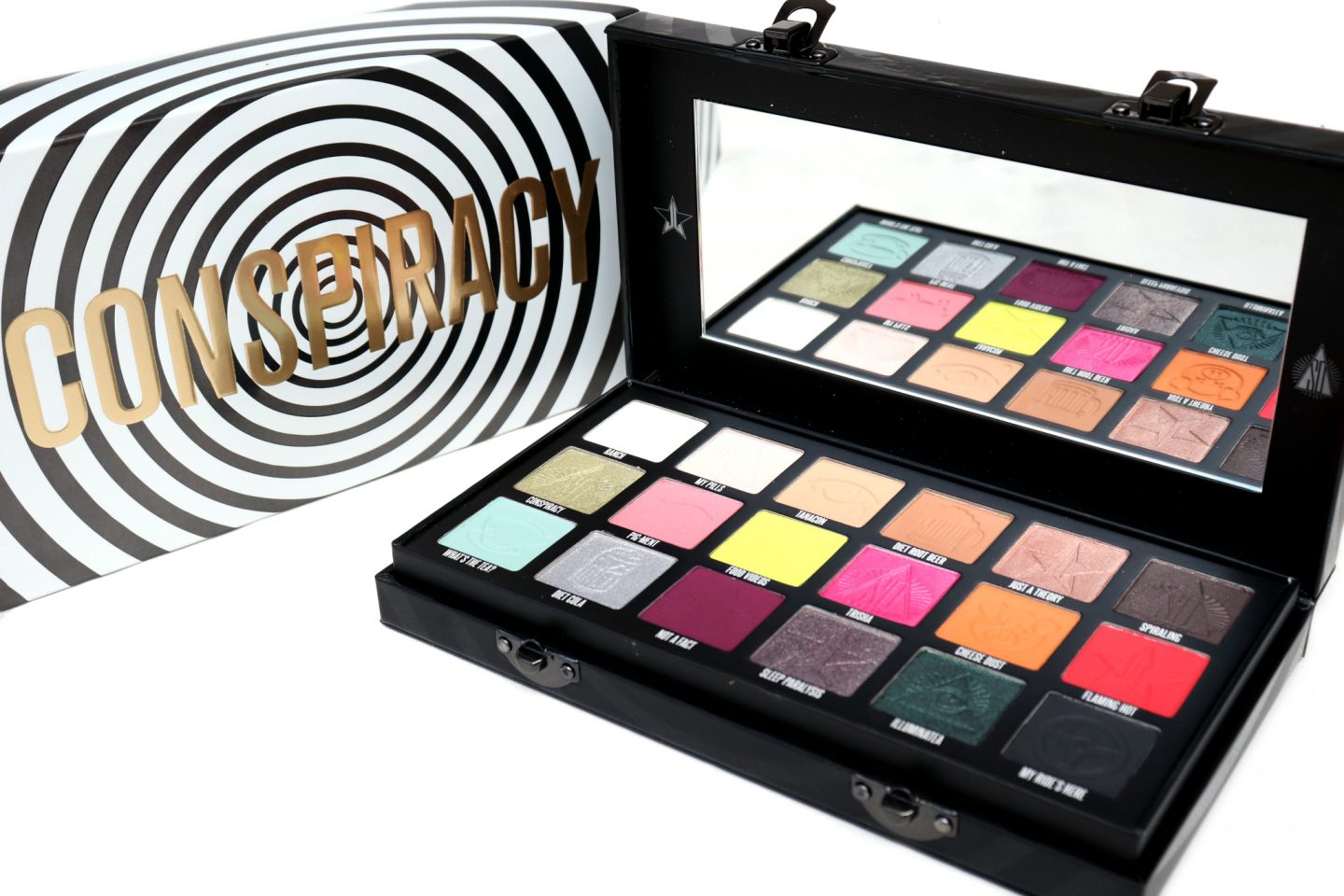 I’ve purchased my palette at BeautyBay.com for €54,00 Euro. Other retailer that ship for free and do not have any extra customs fees to The Netherlands are TheMakeupSpot.nl, eu.Morphe.com and IciParisXL.nl.

Did you grab anything from the Shane x Jeffree Conspiracy Collection?