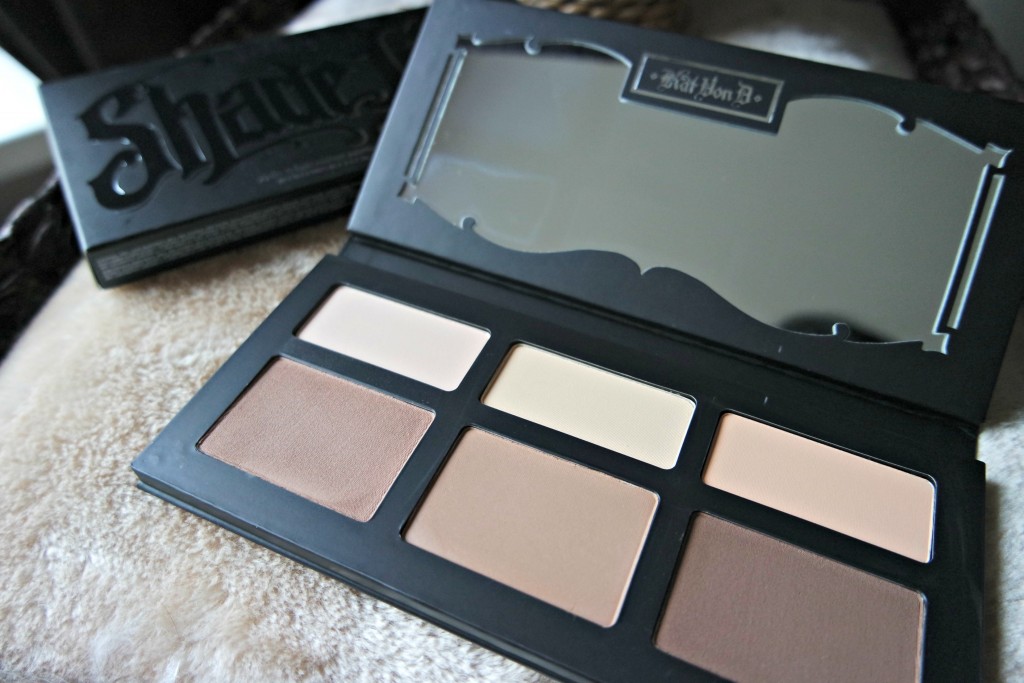 Face contouring is great way to make your face into a more preferred shape by creating more depth and dimension. The Kat von D Shade + Light Contour Palette is one of the most popular powder contour palettes around. I have this one for a while (hence my old background) and will give you an in-depth review about this palette. 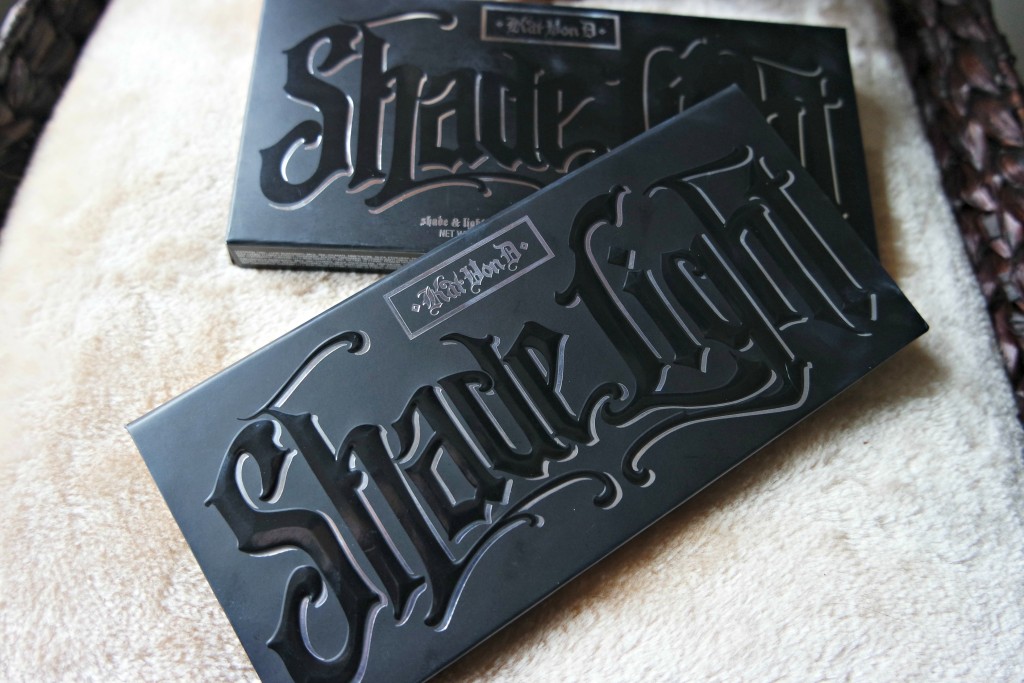 The Kat von D Shade + Light Contour Palette is made of hard and sturdy cardboard and has a magnetic closure. The palette is matte black and has glossy, black lettering with silver details to make it look like a 3-D image. It displays the name of the palette, “Shade Light” in a tattoo lettering style and also has the Kat von D logo on top. 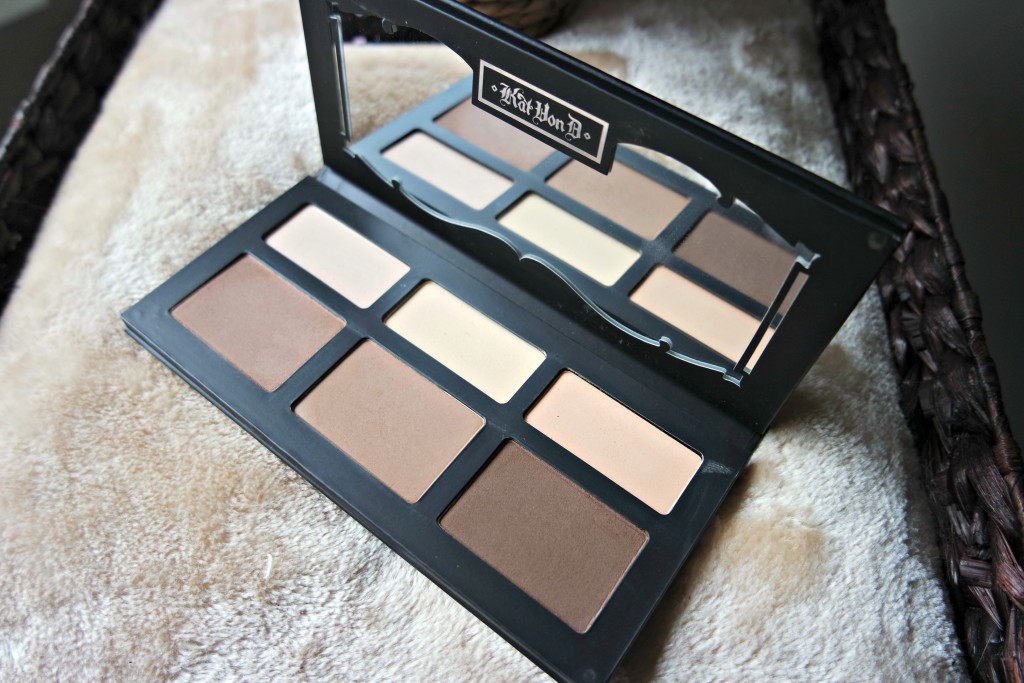 The Kat von D Shade + Light Contour Palette consists of six shades; three highlighting and three contouring. The contouring shades are in a slightly bigger pan compared to the highlighting shades. It also has a very big mirror on the lid. 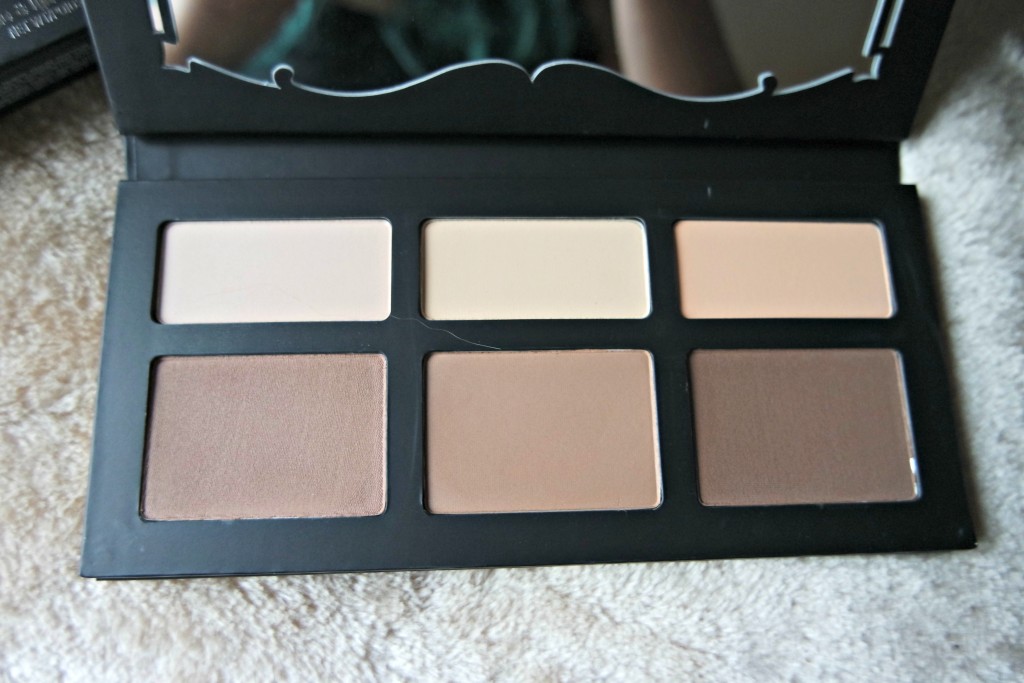 The shades of this palette are starting from the top left: Lucid (pinkish nude), Lyric (yellow beige), Levitation (soft peach) and Sombre (true taupe), Shadowplay (soft brown), Subconscious (deep brown). There is only one variation to this palette and looking at the shades, I think this would probably be best for light to tan skintones. This palette would probably not be suitable for the ends of the skintone spectrum like fair or darker skin tones.

Here are all the shades Kat von D Shade + Light Contour Palette swatched from left to right: Lucid (pinkish nude), Lyric (yellow beige), Levitation (soft peach) and Sombre (true taupe), Shadowplay (soft brown), Subconscious (deep brown). All the contouring and highlighting powders are very buttery, pigmented and do not crumble so they don’t give any fallout. 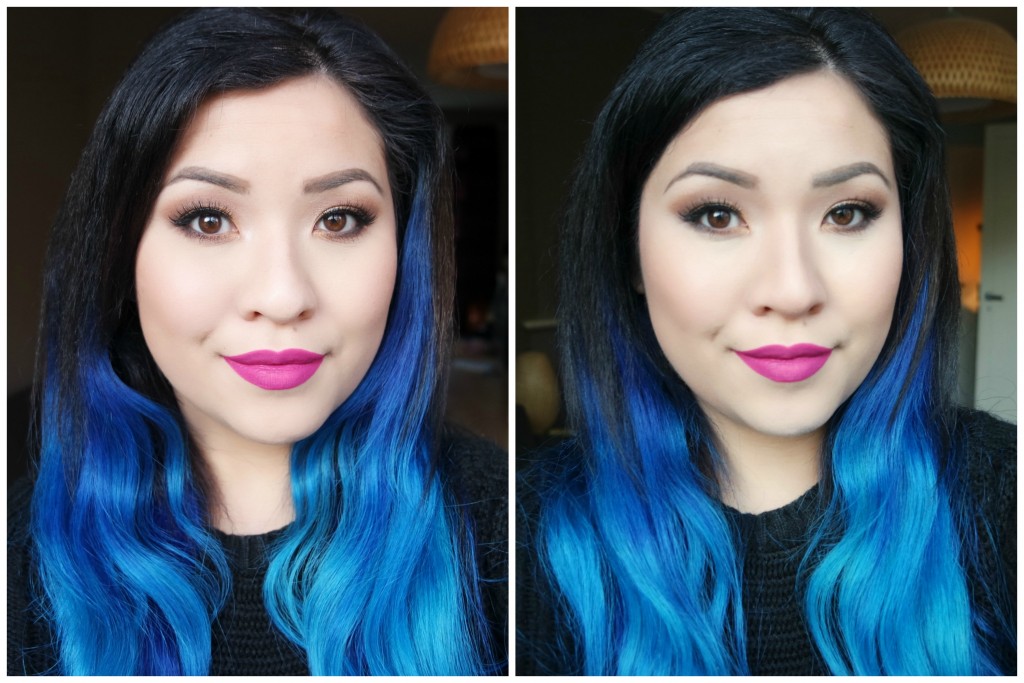 For highlighting, I used the shade Lyric underneath my eyes and Lucid on the bridge of my nose. I used Sombre to contour the sides of my nose and a mix of Sombre and Shadowplay on the hollows of my cheeks, and on the sides of my face to create a slimmer look.

I think the contouring on my cheek is very subtle but it still makes a big difference if you compare the before/after pictures. I didn’t use the darker shades for this look however, I have used them after my vacation when I had a tan, since the other shades were too light for me to show up nicely on my skin. 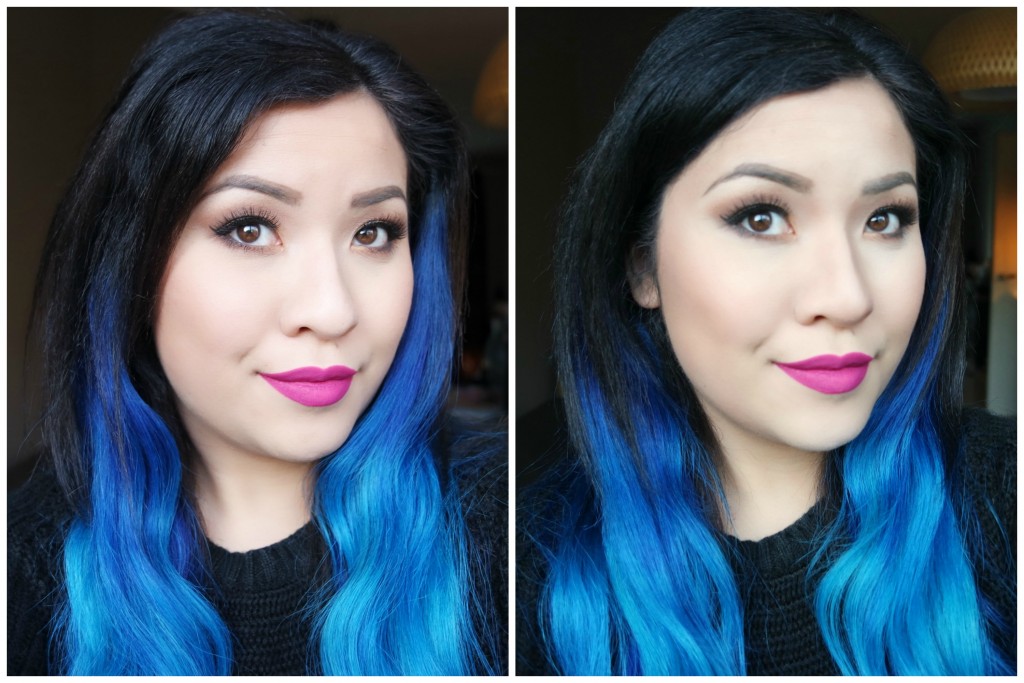 I think the shades are very complimentary to my skin tone. I really love to contour my nose with Sombre, which I use very often on a daily basis. Since the powders are so pigmented, you have to be careful to not use a lot of powder in the beginnen but slowly build up the shade while softly blending the product, which is very easy to do. 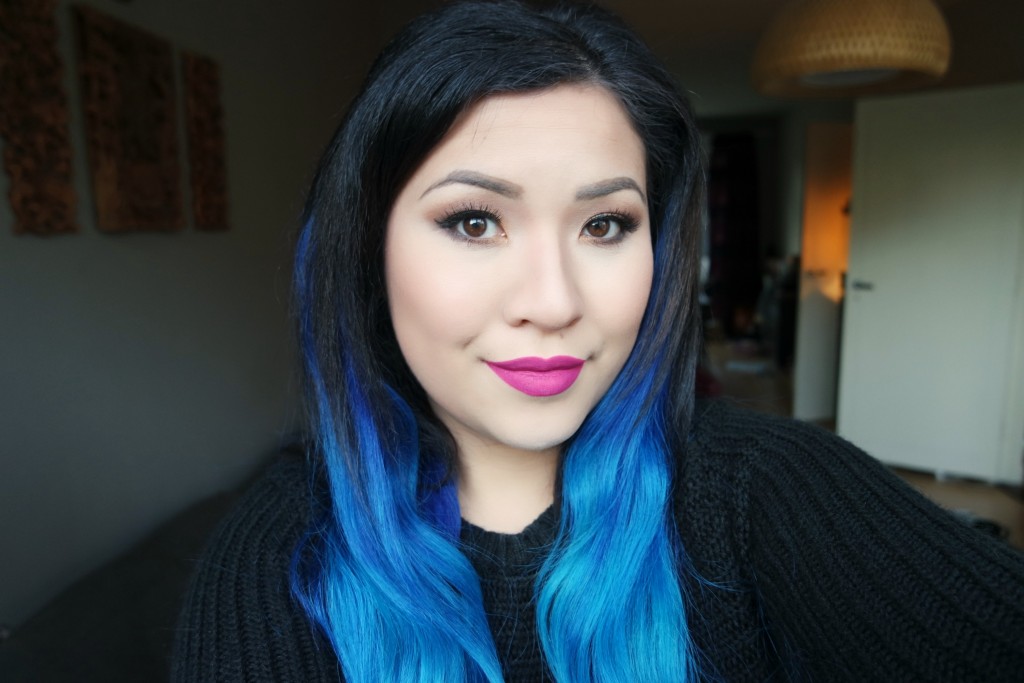 The funny thing is, I don’t really like to use the Kat von D Shade + Light Contour Palette aside for nose contouring. Even though the shades are nicely blendable, it is a bit too much coverage for me and looks unnaturally matte, especially the highlighting shades. This might be not so noticeable in picture but it does in person (for myself at least). Even if I use a finishing spray, it still looks matte and not natural on me, almost cake-y. I personally would much more prefer a cream contour and just a lighter concealer to highlight, because that would look much more like real, natural skin than this. I think this is mostly just a personal preference, because the quality of these powders is amazing and great for people who like this sort of finish. 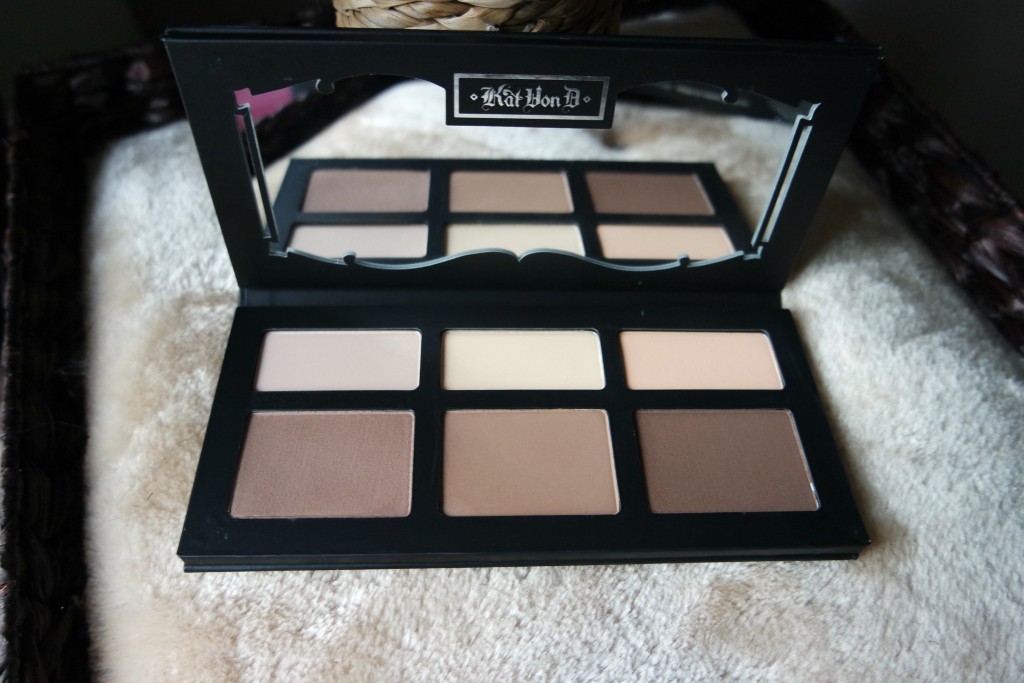 The Kat von D Shade + Light Contour Palette is available for $46.00 USD at Sephora.com (Price excluding shipping and customs fees. Check xe.com for the current price in Euro) and also available for € 62,95 Euro at Voluminous.nl.

Do you use contouring in your make-up routine?