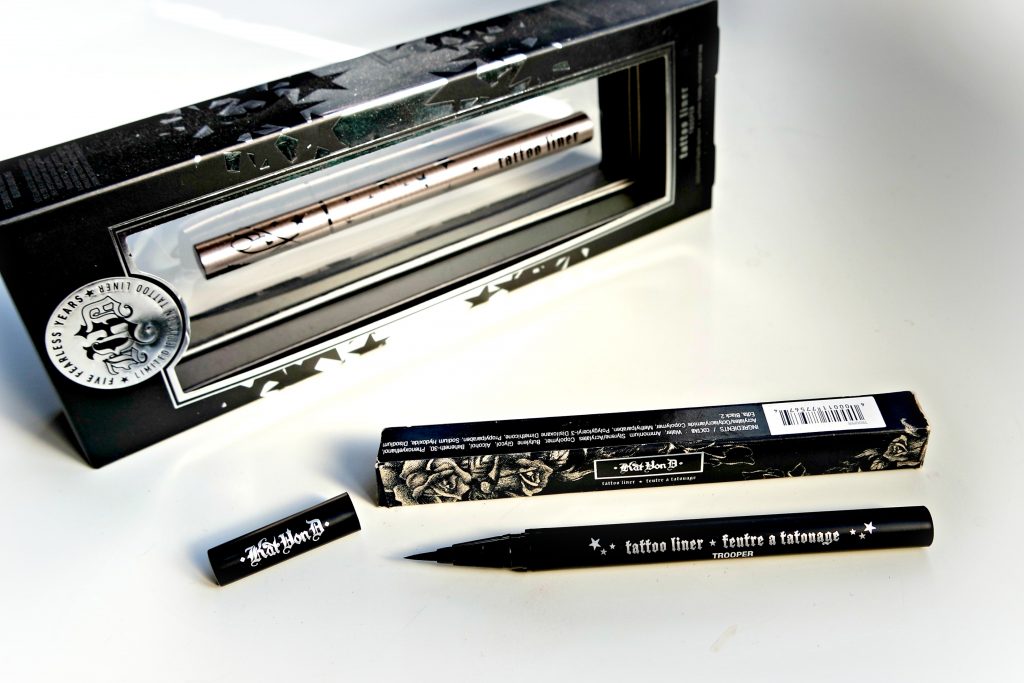 One of the most popular products of the cruelty-free brand Kat von D is the Tattoo Liner in Trooper. This eyeliner is, according to the description at Sephora.com supposed to “achieve eye perfection with this high-pigment, waterproof liner that stays put all day for a fade-, melt-, crack-, and run-resistant finish”. This eyeliner has been a favorite for a few years and I’m going to tell you all the details about the Kat von D Tattoo Liner in Trooper in this post. 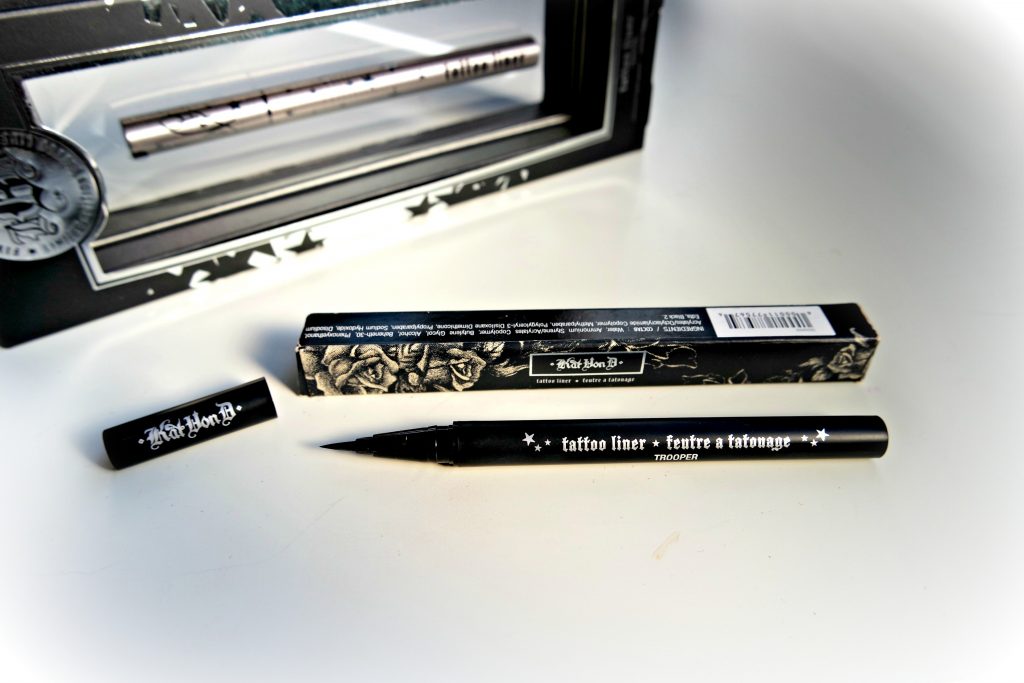 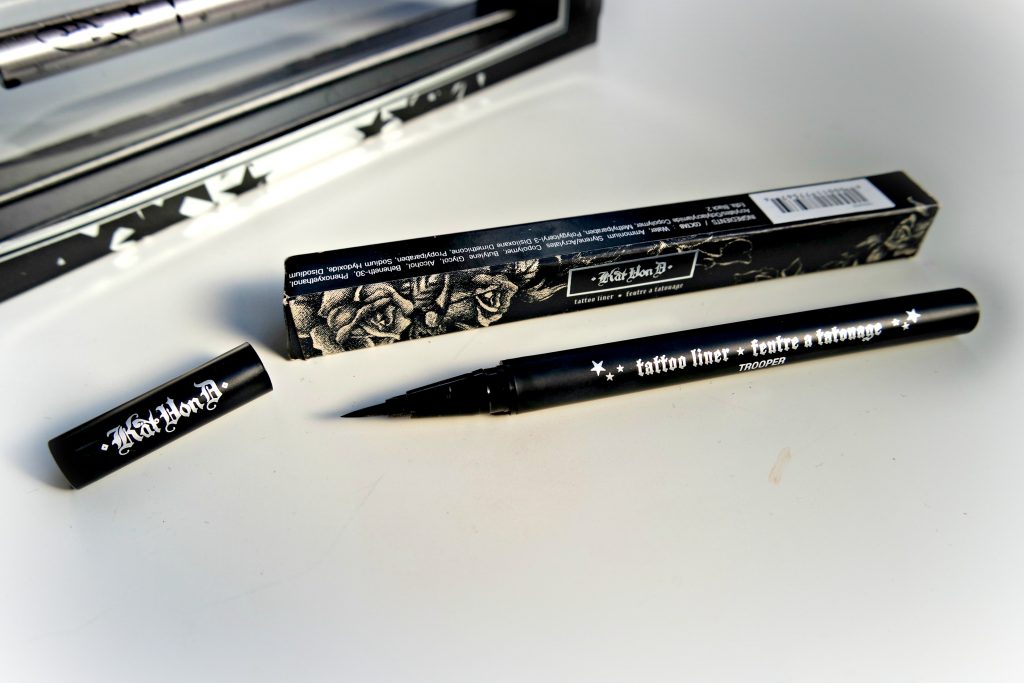 The Kat von D Tattoo Liner in Trooper is an eyeliner pen that comes in a black box with Kats artwork. The eyeliner pen is black and has silver details like stars and the Kat von D logo on the cap. The pen contains 8 mL of product. I have owned several Tattoo Liners already and unfortunately, the packaging isn’t that great. The pen itself is fine however, the silver details will fade over time if you just put this in your make-up bag without the black box. 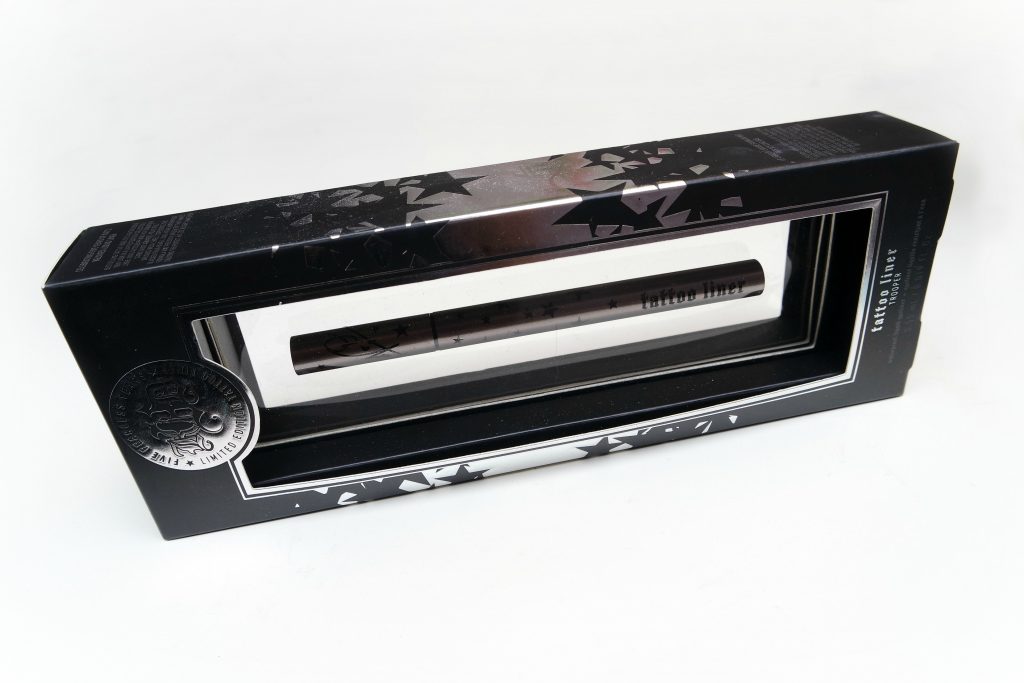 Around the holidays last year, Kat von D also came out with the Limited Edition Kat von D Tattoo Liner in Trooper which is not available any longer. This one was slightly more expensive and came in a very awesome partially transparent box, so it looks like the Tattoo Liner is floating. The pen itself also had a special exterior, instead of black with silver details, it was silver/aluminum looking with black details. This was especially made for the brands 5 year anniversary. Also, a part of the proceeds would go to Charity, I think it was an Animal Shelter near where Kat lives but I don’t know how much of the proceeds were given. I still haven’t used mine because I think it looks way too cool in the packaging. 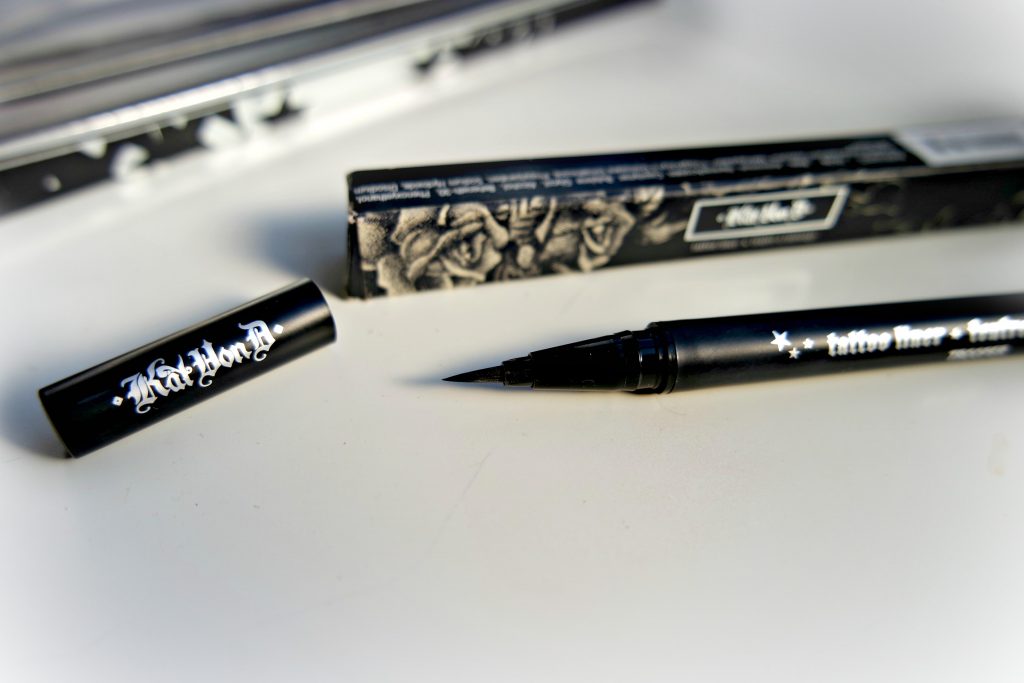 What I really love about this liner is the brush tip. There are many sorts of eyeliners, some like a gel liner with a separate brush, others like an eyeliner that is dipped into a liquid and there’s also felt tip liners. I personally liked felt tip liners because it gave me the precision that I wanted. The downside of felt tip liners is that the tip can get blunt, but they also dry out very quickly. The Kat von D Tattoo Liner is like a felt tip brush, the difference is that the tip is made of synthetic hairs, so you still have the precision that will never get blunt and this also doesn’t dry out. It sometimes that the tip gets a bit dry, but the only thing you need to do to activate it again is swiping the tip on a surface like a cotton pad or your hand, and it will work again like it’s new. 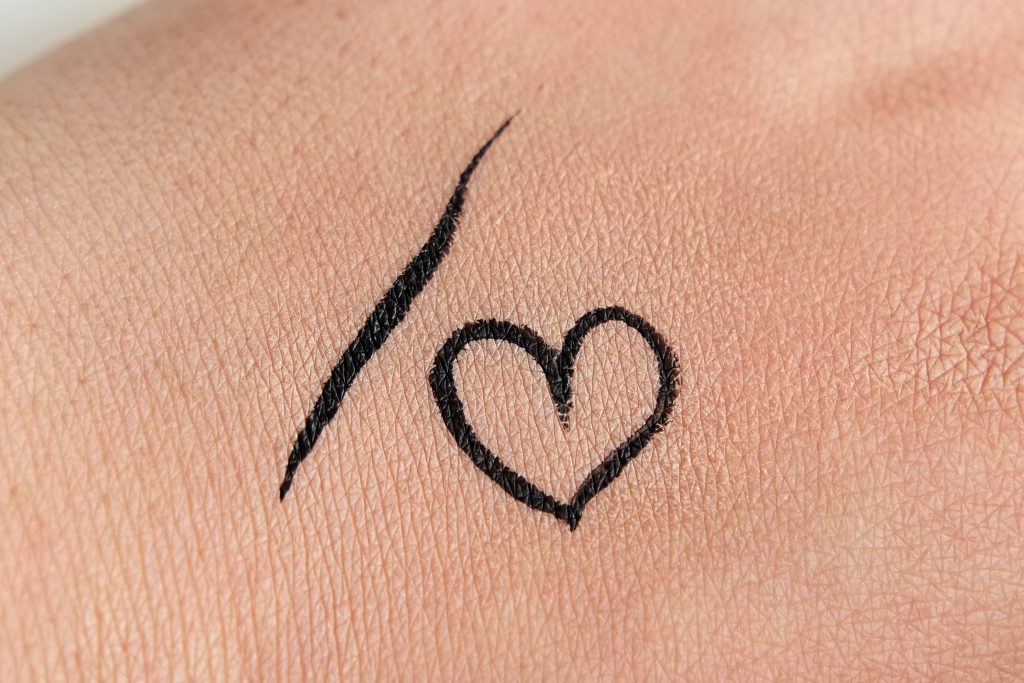 The liquid is very thin and intensely black. You can make thin strokes using the tip or thicker ones depending on how hard you push the liner. It is als very easy to create shapes using the liner, without ever getting dry and stopping to work in the middle of your line. The only downside about this formula is that it is still a bit shiny, I prefer a more matte look. 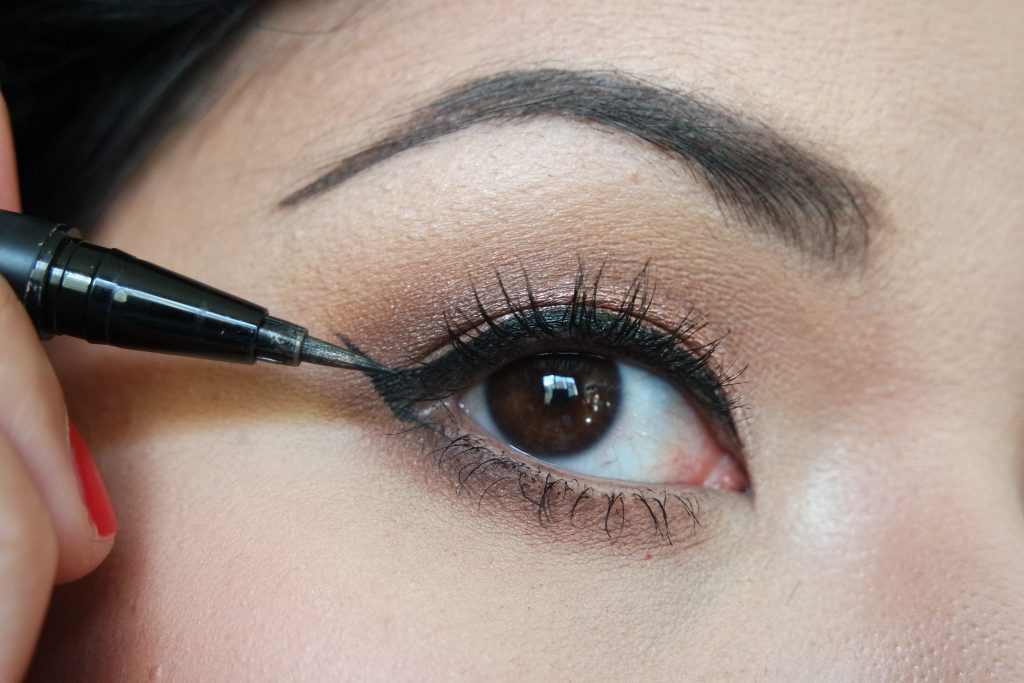 Not being able to finish the complete line because the liner has dried up is a thing that happened to me quite often using a felt tip liner, because the eyeshadow absorbs the moisture of the felt tip. This isn’t the case when using the Kat von D Tattoo Liner in Trooper. This only happens whenever it almost runs out. It is also very easy to go in between the eyelashes with the liner using the very tip of the liner. 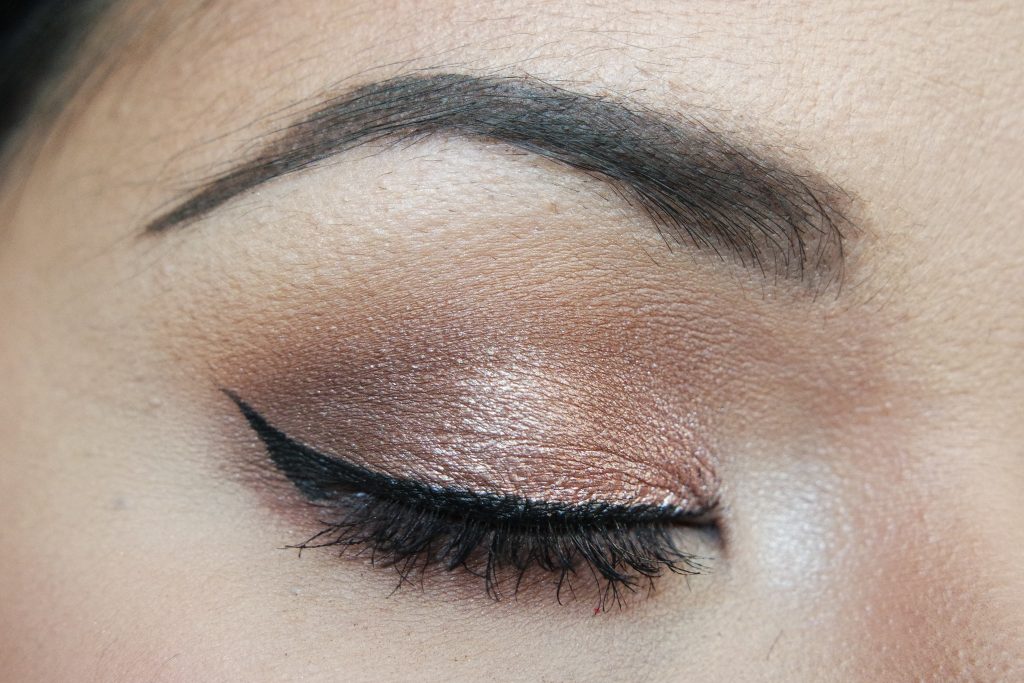 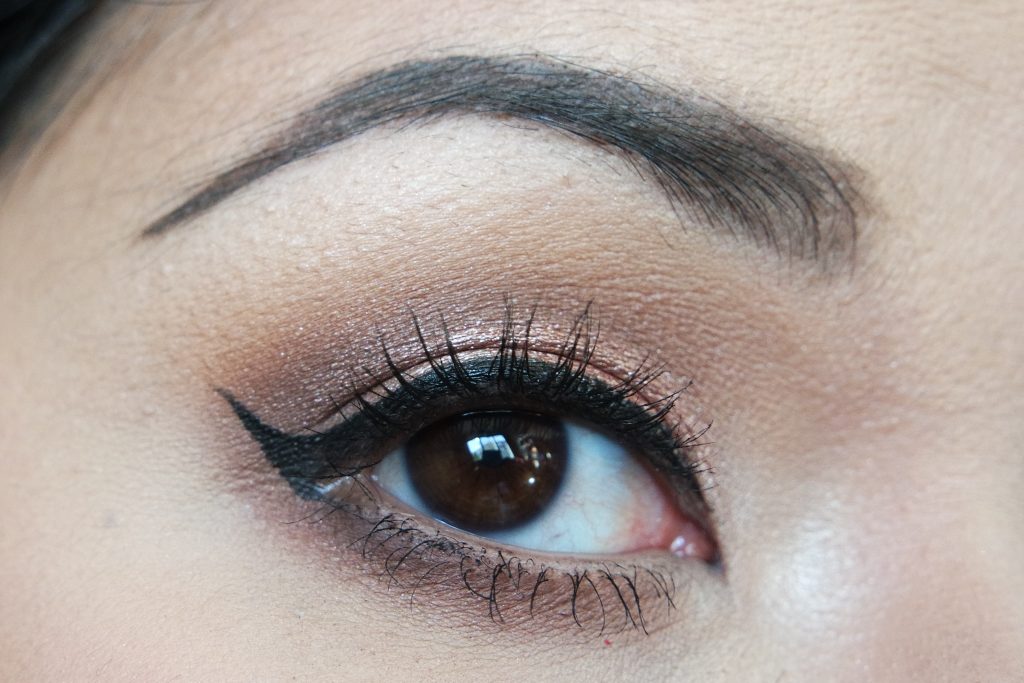 I have hooded eyes and this eyeliner does not transfer onto my eyelid, during application and after wearing the liner for a day. This was always a problem with eyeliners where it is dipped into the product, it took way too long to dry so the eyeliner always transferred onto my eyelid during application. Because of Kat von D Tattoo Liner in Trooper‘s name, I was always afraid that the liner was too water-proof and that I would have to take it off with some special make-up remover. This isn’t the case however. I wouldn’t even say that this stuff is water-proof on me. I sometimes have an irritated eye that water for a bit in the corners, and the liner does not survive that. It is also very easy to remove like with micellair water or make-up wipes. But don’t worry, it will definitely stay on all-day, just don’t ball your eyes out or go running through the rain for an hour when wearing this liner. 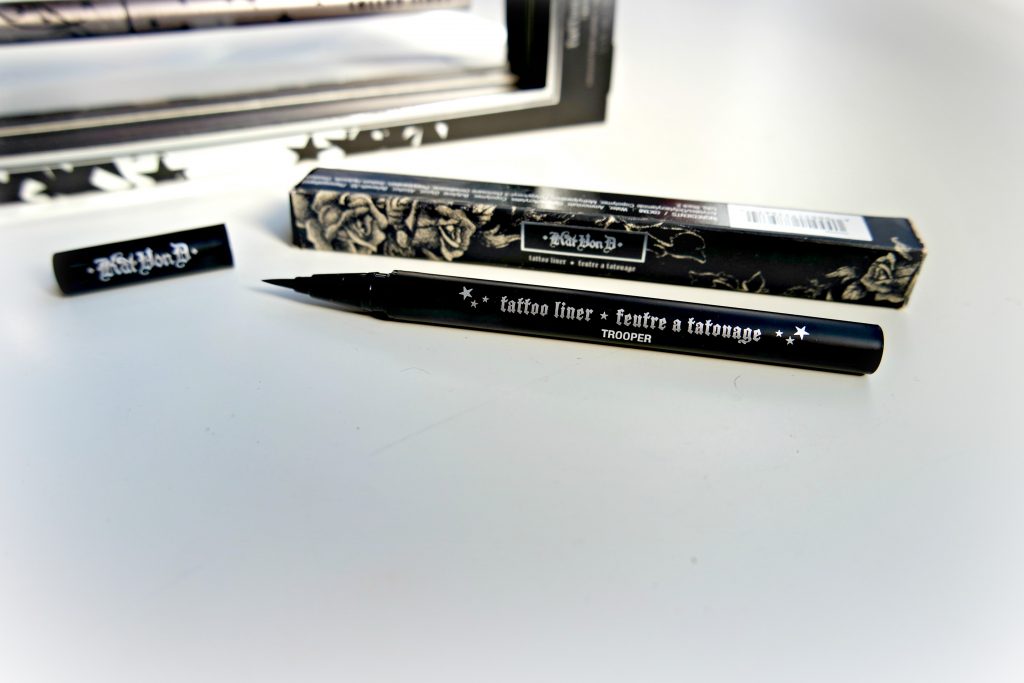 If you’re a fan of pen/felt tip like eyeliners, you should definitely check out the Kat von D Tattoo Liner in Trooper. It’s the most effortless, intensely black eyeliner that I know of and lasts for a long period of time. I use it about 3 times per week and I think it lasts me for about half a year. I’m horrible at making my eyeliner even on both eyes, so an effortless eyeliner is definitely a huge help with that (which still fails sometimes no matter how much experience I have).

The Kat von D Tattoo Liner in Trooper is available for $20 USD at Sephora.com (excluding shipping, taxes and customs fees. Check xe.com for the current price in Euro.

What type of eyeliner is your favorite to use?