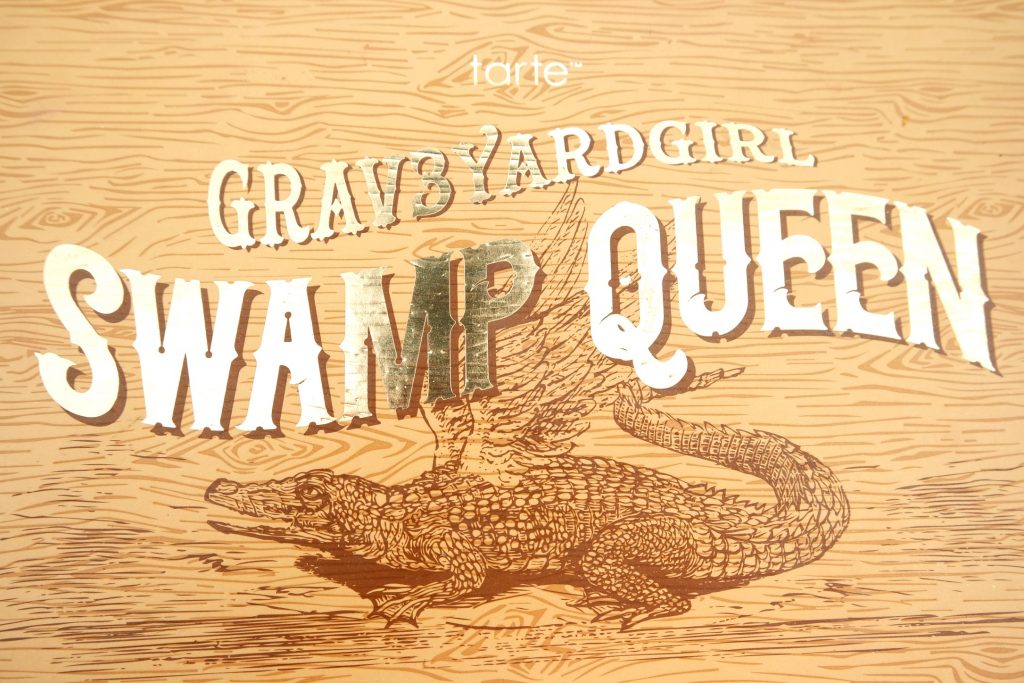 tarte has collaborated with the sassy Youtuber Grav3yardgirl to create the Swamp Queen Palette. This palette was released some time ago already, but was quickly sold out. I bought this palette during the original release but never reviewed it since it wasn’t available anymore. As a surprise, tarte has re-released the Swamp Queen Palette, again as a Limited Edition. I’m happy to be able to show you the palette in this review. 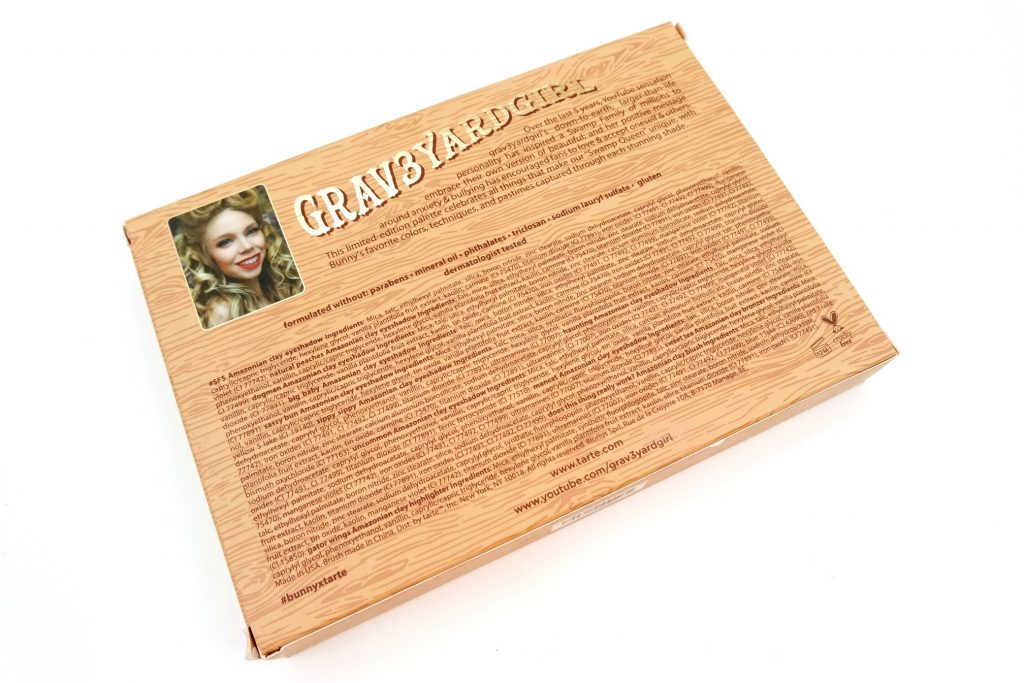 For those who don’t know Bunny aka Grav3yardgirl, she is a very popular Youtuber, having more than seven million subscribers. She usually posts fun videos trying things out like “As Seen on TV” products in her Does this Thing Really Work? series. She also likes to show her first impressions of new make-up products among many other things. I’ve been following her for years and I really love her personality so much. She’s from Texas and lives in the Swamp area. The palette’s design and shades are completely done by her and are inspired by the things that she likes and just her as a person. 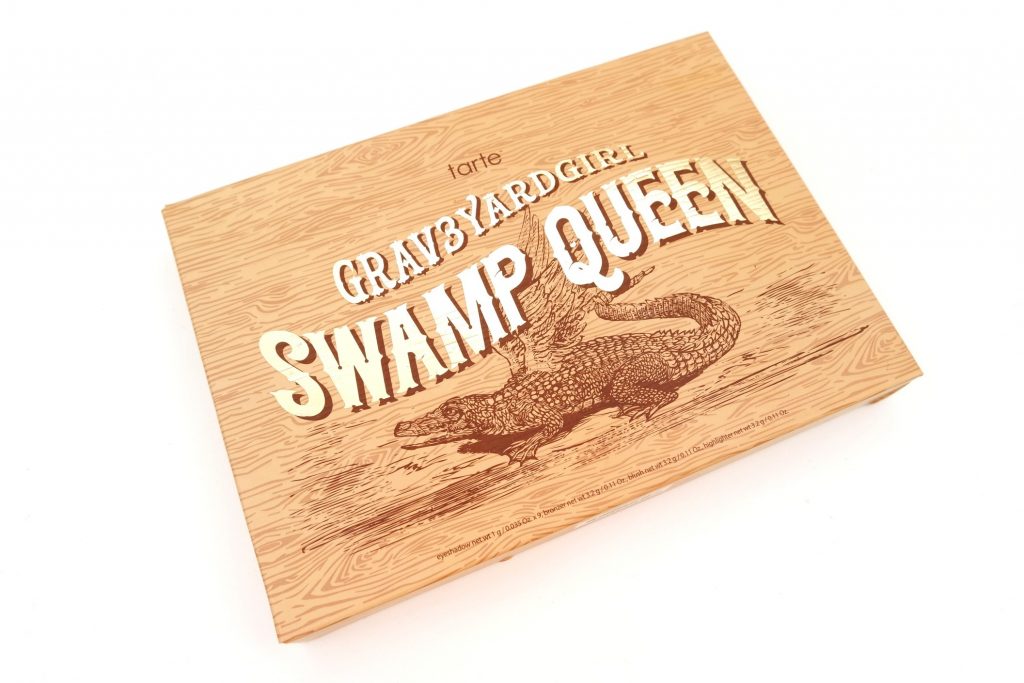 The tarte x  Grav3yardgirl Swamp Queen Palette comes in a cardboard box packaging that has the same artwork as the palette. The palette has a wooden antique design, inspired by the 1800’s Western time. The lettering is written in gold and also has the same western type design. The name of the palette is inspired by her followers, which she calls her Swamp Family. There’s also an alligator with wings on the palette, which is the symbol/mascotte of her channel. 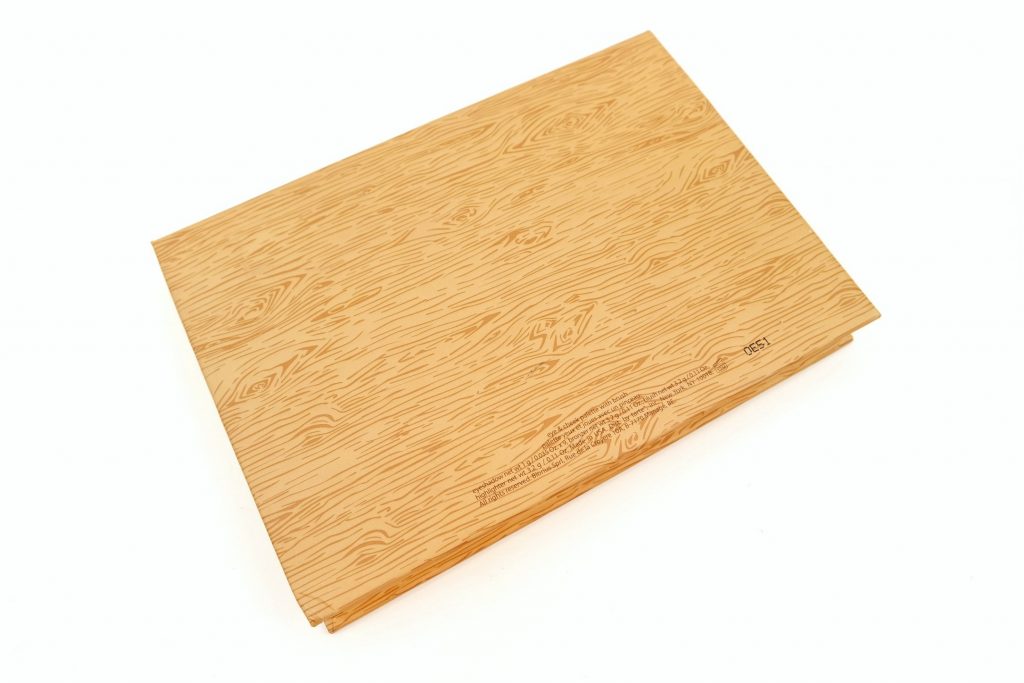 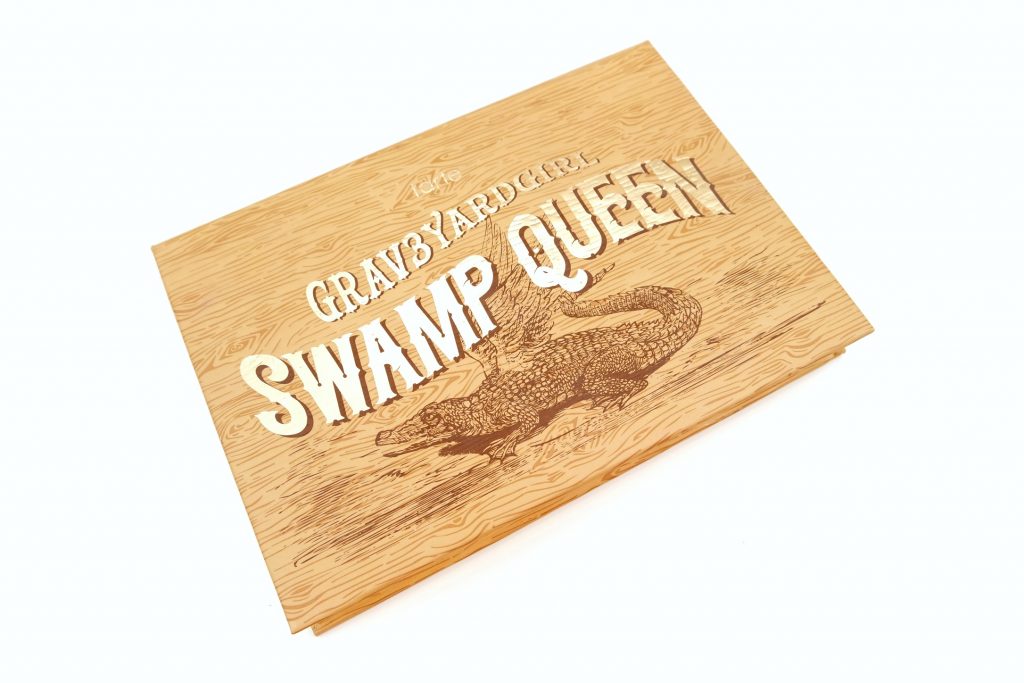 Like I’ve mentioned before, the tarte x  Grav3yardgirl Swamp Queen Palette itself has the same artwork as the box, only having a blank back instead of having the information that the box has. Bunny really thought everything through, she wanted to make sure that it had a surface with an interesting texture but also wouldn’t become/look dirty over time. The texture of the palette feels like wood. She also wanted the palette to be sturdy and have some weight so it won’t break while traveling. I would compare the sturdy-ness and feeling like a hardcover book. I’m completely in love with everything when it comes to the packaging of this palette. The palette feels so sturdy and of high quality, it’s one of the most beautiful and unique palettes that I own. I find the packaging almost as important as the product itself, and this just wins everything for me. 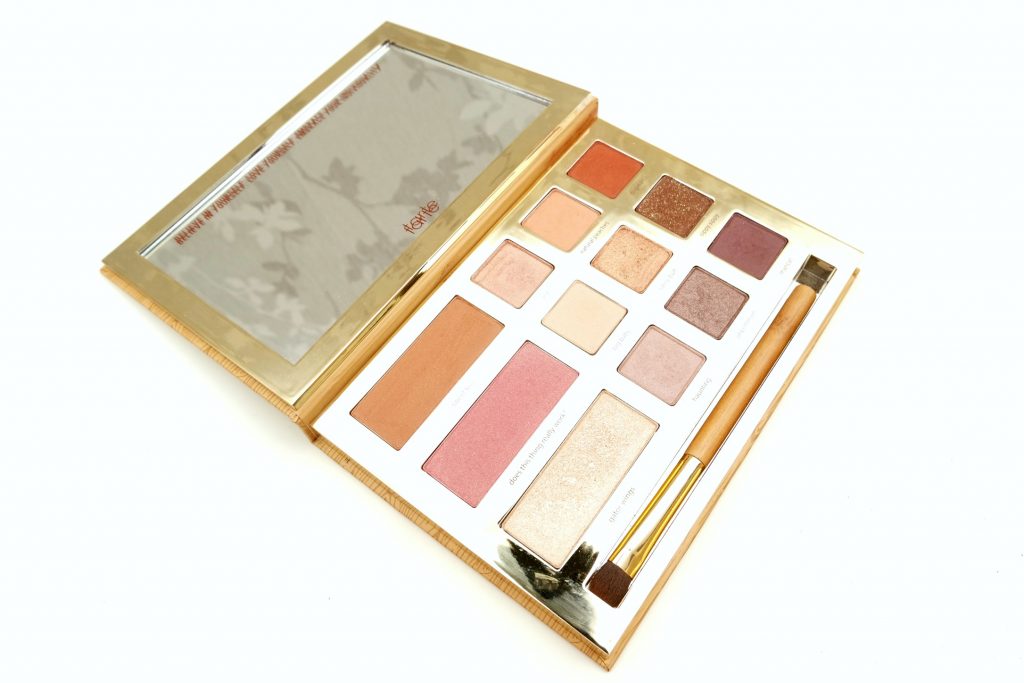 The tarte x  Grav3yardgirl Swamp Queen Palette opens and closes by a magnetic closure. The inside of the palette is made of plastic and has a shiny gold look, which does get very dirty and will show all fingerprints. The palette has a huge mirror on the inside of the lid and all the products on the bottom. 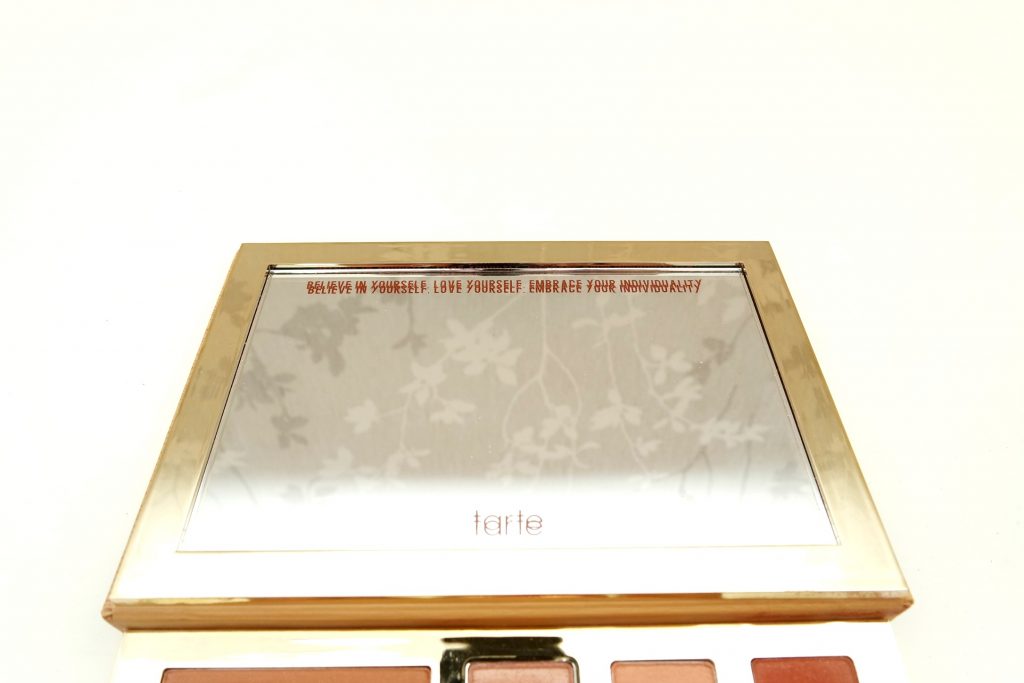 The top of the mirror, shows a quote that Bunny came up with herself. It says “Believe in yourself. Love yourself. Emrace your Individuality.” The bottom of the mirror shows the tarte logo. Bunny thought that it would be nice thing to give a pep-talk as you are looking at yourself in the mirror. I think it’s a very sweet gesture and a really nice detail that shows how sweet Bunny is as a person. 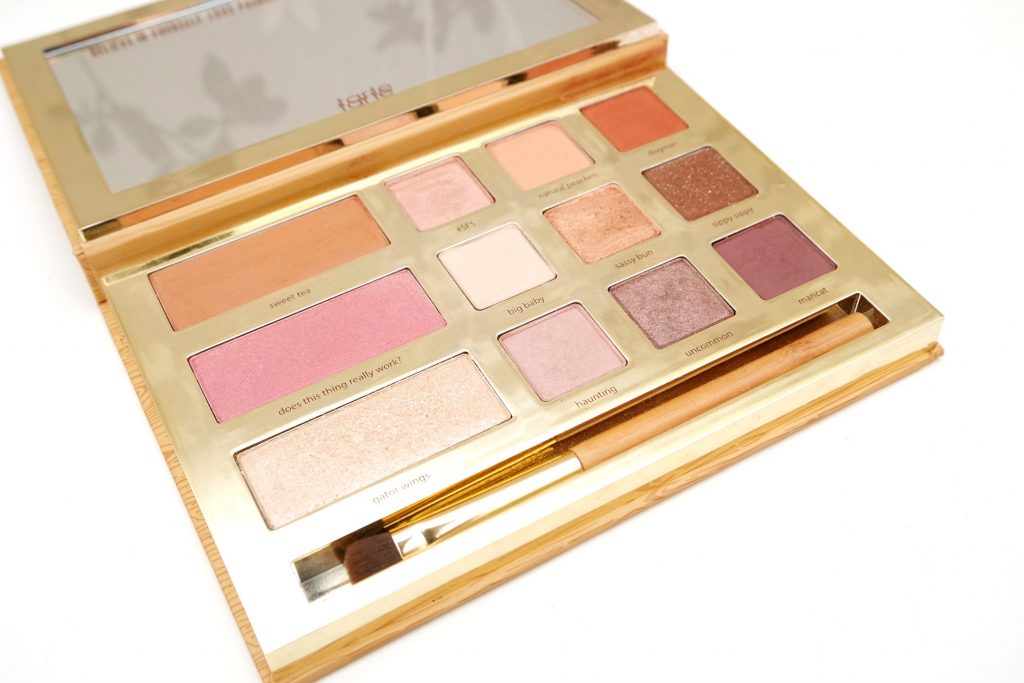 The tarte x  Grav3yardgirl Swamp Queen Palette contains nine eyeshadows, a bronzer, blush and highlighter and an eyeshadow brush. The brush has the same aesthetic as the palette, having a wooden handle with gold details. All the shades of the products were picked by Bunny herself. She chose colors that would be wearable and be complimentary to each other. What also is very noticeable as soon as you open the palette is the scent. All the products have a vanilla scent, which I really love because it’s not to overwhelming for me and smells natural. 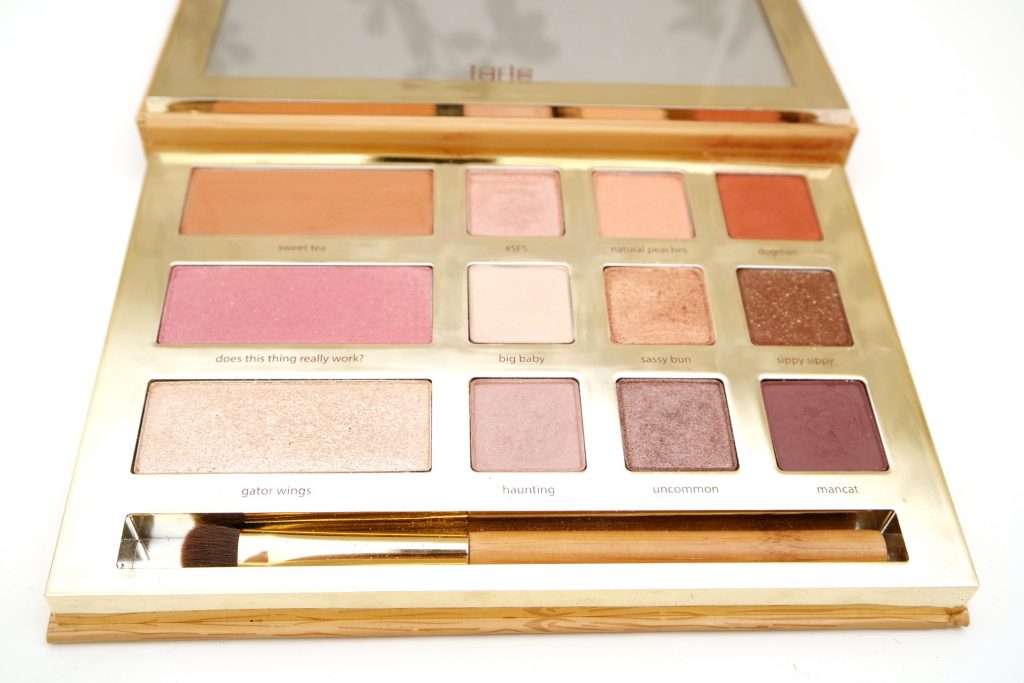 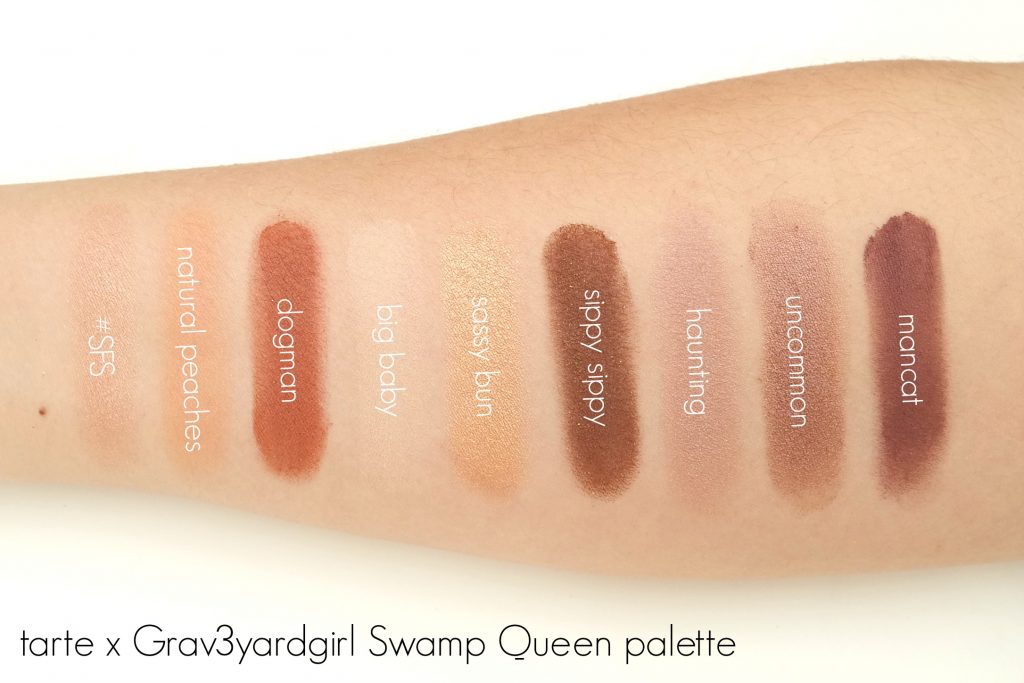 Here are the swatches of all the eyeshadows inside the tarte x  Grav3yardgirl Swamp Queen Palette. I will put all the descriptions of the eyeshadows below with the explanation of the names.

#SFS – a rose gold shade with a metallic/satin finish. The name stands for Swamp Family Strong, which is a hashtag that bunny likes to use to represent her followers.

dogman – a burnt orange sienna shade with a matte base and also contains violet and gold shimmer/glitter. Bunny has a boyfriend that she likes to call Dogman. Orange colors are his favorite type of shades.

big baby –  a cream shade with a matte finish. This is named after Bunny’s favorite creepy baby doll, which she collects.

sassy bun – a copper peach shade with a metallic finish. This is named after a hairstyle that bunny likes to wear.

sippy sippy – dark brown shade with a glittery finish. These are the words that Bunny likes to say before taking a sip of her sweet tea.

haunting – a lavender shade with a shimmery finish. Before Bunny became really popular, she started her channel talking about ghost stories that she experienced.

uncommon – a purple slate shade with a metallic finish. This shade is named after her favorite antique store Uncommon Objects.

mancat – a deep plum shade with a – This shade is named in loving memory of her cat which shared the same name. 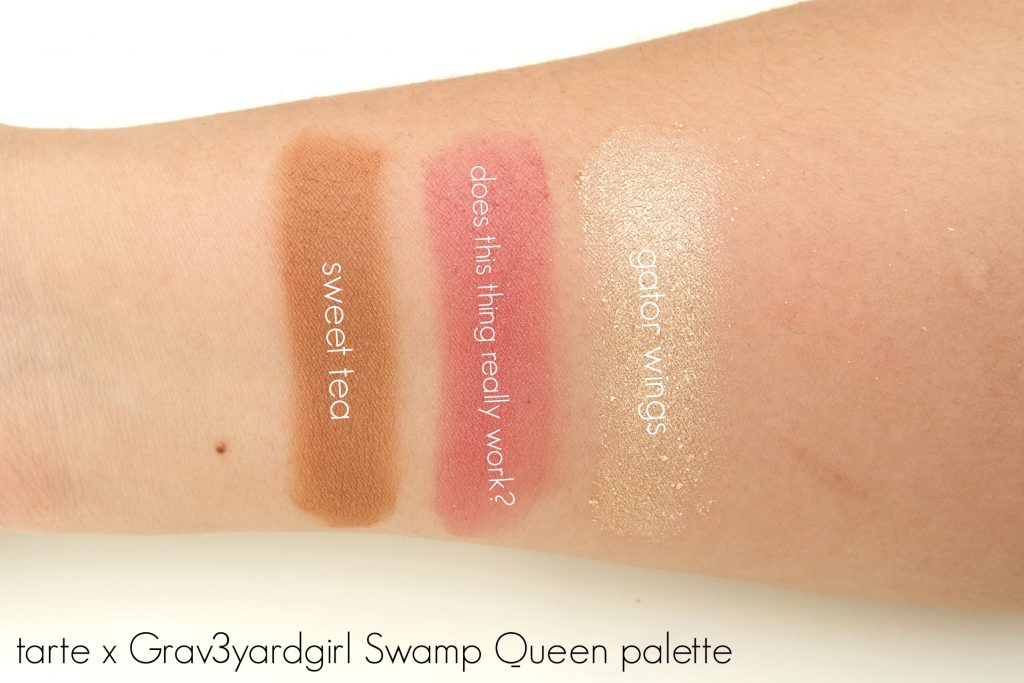 Here are the swatches of the bronzer, highlighter and blush inside the tarte x  Grav3yardgirl Swamp Queen Palette. Again, descriptions of the products are down below with the explanation of the names.

sweet tea – a warm, deep bronze shade with a golden shimmery finish. Bunny named this after her favorite type of drink, which she sips often during her videos.

does this thing really work? – a rosy mauve shade with a golden shimmery finish. 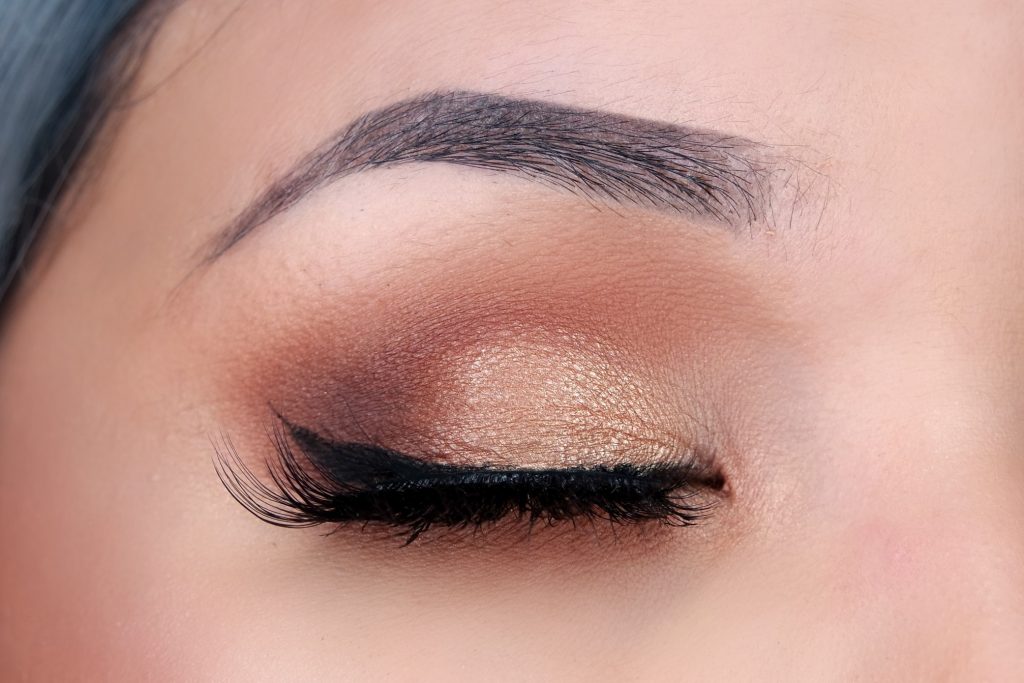 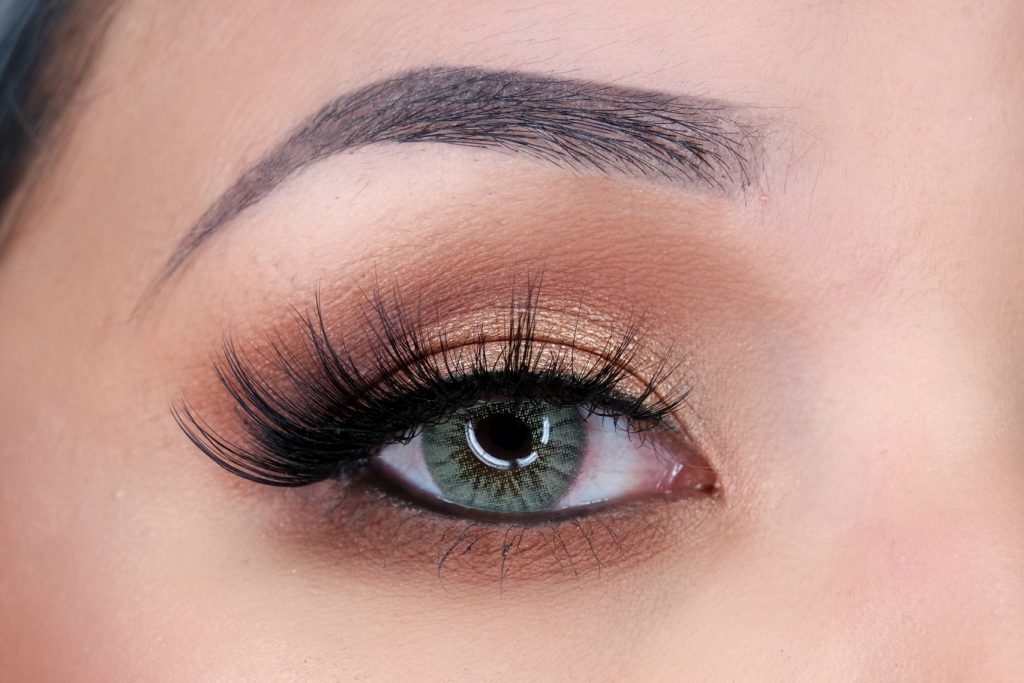 I really like the eyeshadow shades and quality. Every shadow feels super soft, buttery and are easy to blend. I only dislike two shades, which are dogman and sippy sippy due to the high concentration of glitter. I usually never pick glittery shades as a crease or outer V shade, but there weren’t any other shade options to do so. Also, the glitter does not stick and falls off to your entire face if you don’t use a good glitter primer/base. If you don’t pack on the shade and if you blend the eyeshadow like I did, the glitter immediately disappears. What is then left is the matte base, which is what I personally prefer but I wish that they just have left the glitters entirely. I can use these shades with least glitter fallout on my face by tapping the brush first and then blend the colors in.

Just to quickly show you the other three shades, I used haunting, uncommon and mancat for this look that I’ve shared on my Instagram. 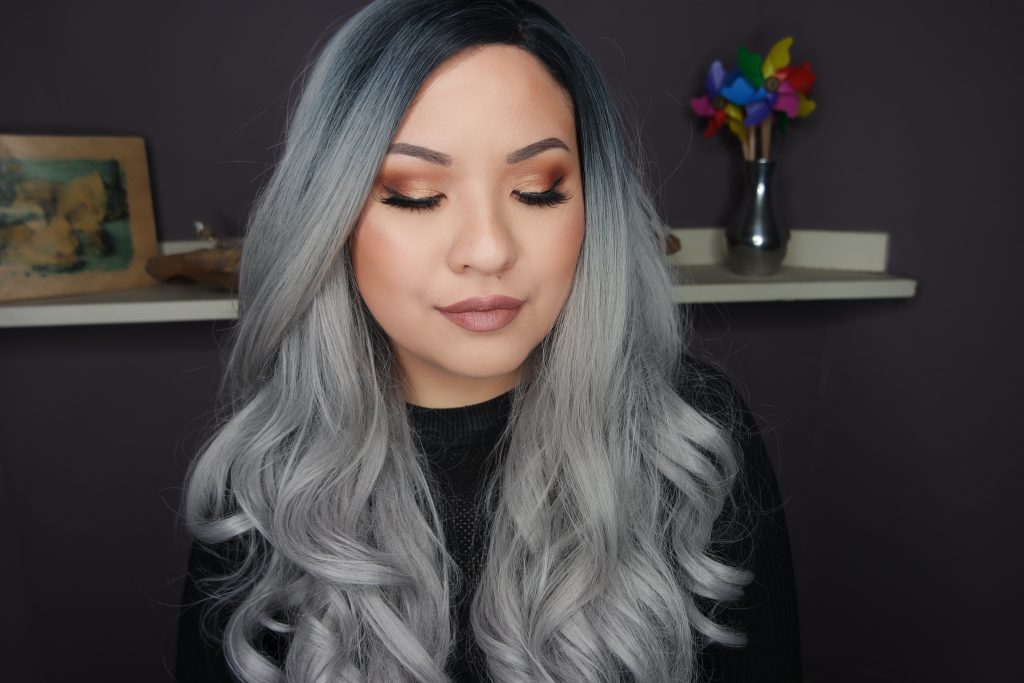 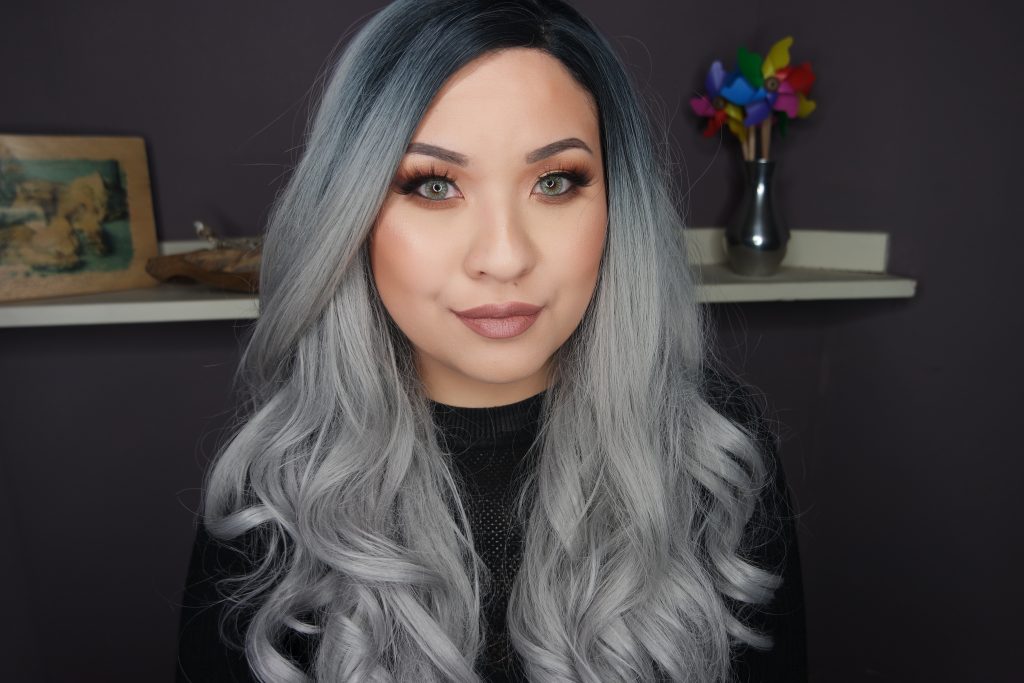 For my face, I used the sweet tea bronzer, does this thing really work? blush and the gator wings highlighter. I also used the texas toast lipstick, which is one of the two lipsticks that are also a part of the collaboration with Bunny. I was afraid that I wouldn’t like all of the face products, since they are again, very glittery and shimmery. As soon as I apply the products and blend them out, they’re actually okay! The bronzer is quite dark, I don’t see people with light skin tones wearing this shade because I usually don’t even use a dark bronzer like this one. I really like how it looks though so I will definitely use this more often. The blush is really flattering and gives a nice, glowy flush. The highlighter is still a bit too glittery for my taste but is very strong and great for pictures. 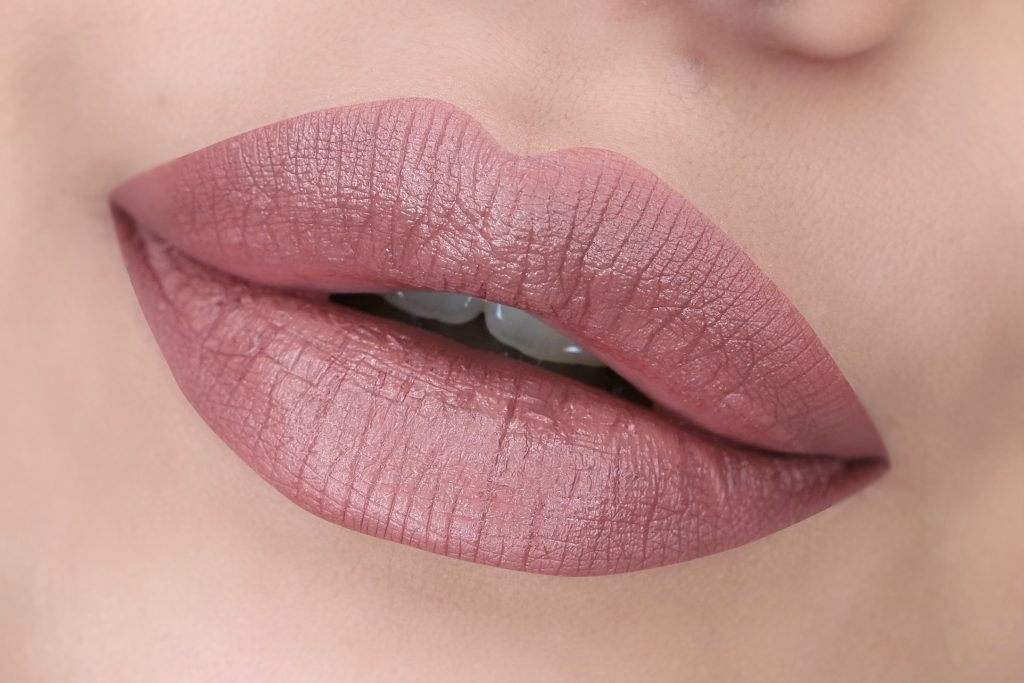 Here’s a closeup of the tarte x Grav3yardgirl lip paint in texas toast. It’s a cool-toned rosy mauve liquid lipstick shade with a matte finish. I chose not to review this product in this post, because I wanted to have the full focus on the palette. 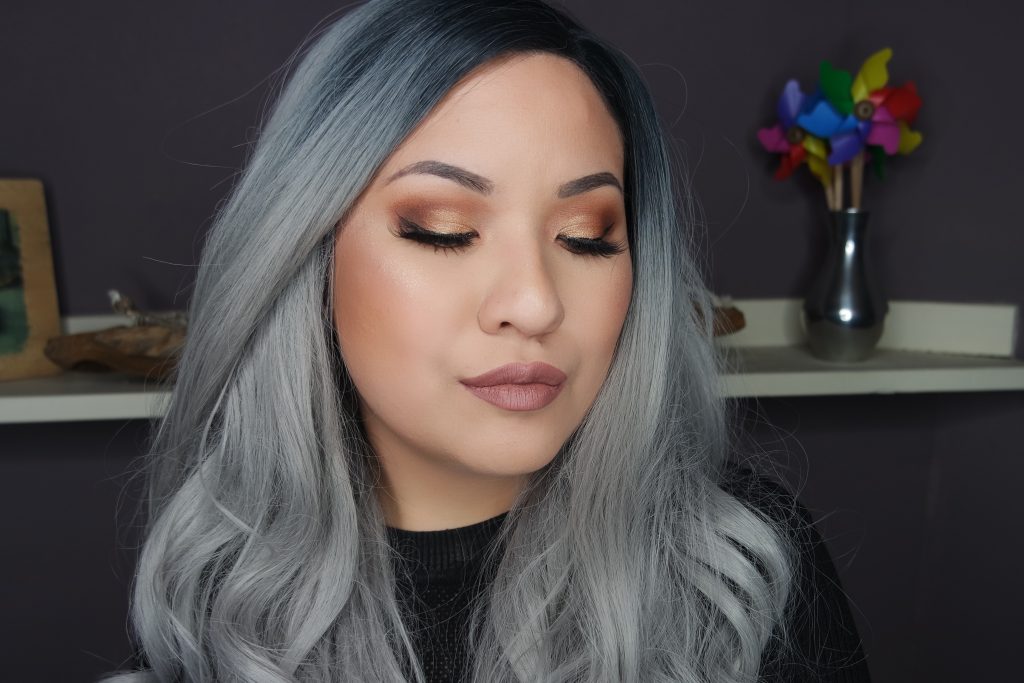 Overall, I think the tarte x  Grav3yardgirl Swamp Queen Palette is great. I love the total aesthetic of the palette and is something that I will always appreciate. I think it really represents Bunny and you can definitely see that she has put her heart and soul into every little detail. Like I’ve mentioned before, I wish that the palette was less glittery in many of the products but most of them work out easily as soon as you get to know them. If you’re a fan of her or a fan of unique packaging like I do, definitely get it! 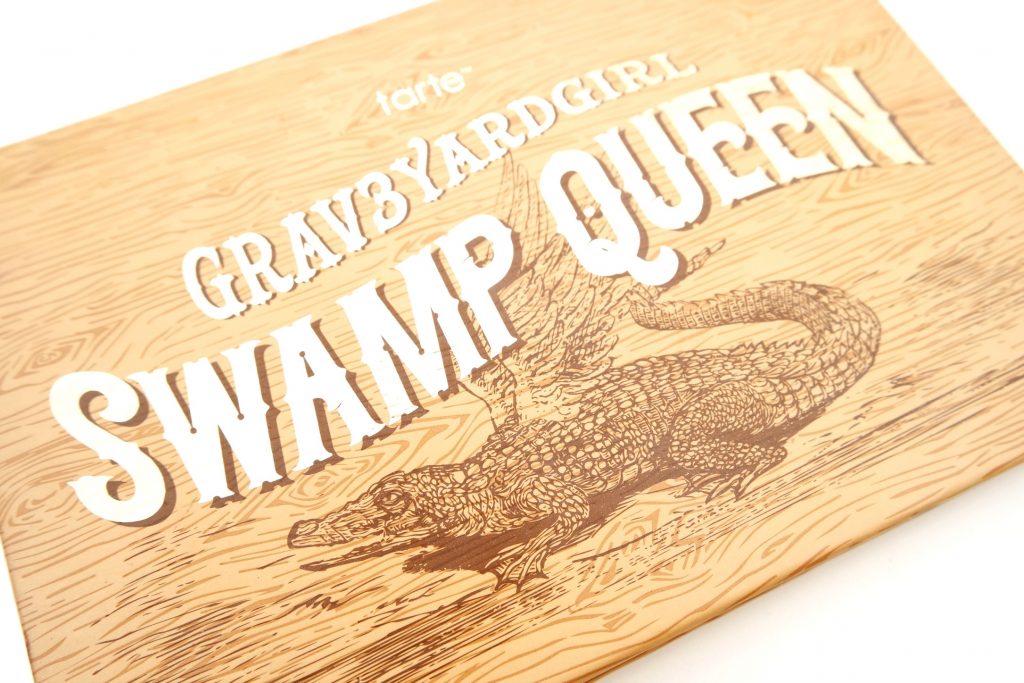 The  tarte x  Grav3yardgirl Swamp Queen Palette is available for a Limited quantity and will again be sold out with no plans on returning. The palette is only available at tartecosmetics.com for €42,00 Euro. Direct shipping to The Netherlands using the most affordable shipping method and estimated customs fees will result in a total pricing of something around €70,00 Euro.

Did you know Bunny already? Are you a fan of her?