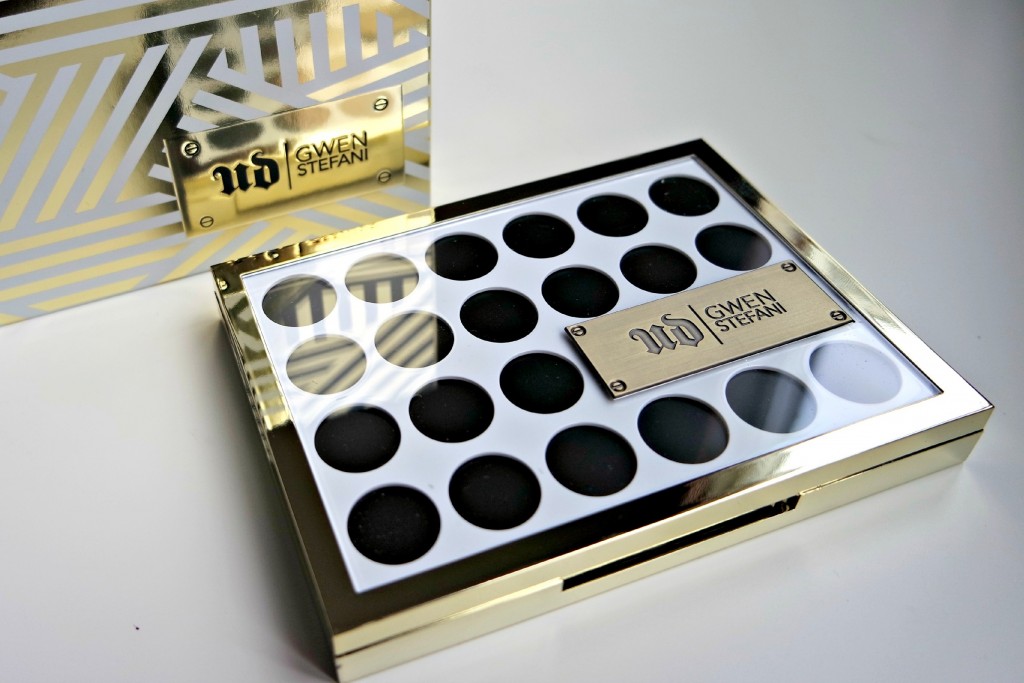 Urban Decay has collaborated with the beautiful and talented singer Gwen Stefani to create the limited edition Urban Decay Gwen Stefani Eyeshadow Palette. Gwen worked closely together with Urban Decayand personally oversaw the design of every single detail of this palette, from the casing to the shadows. For today, I’m going to show you review and show you swatches of this palette. 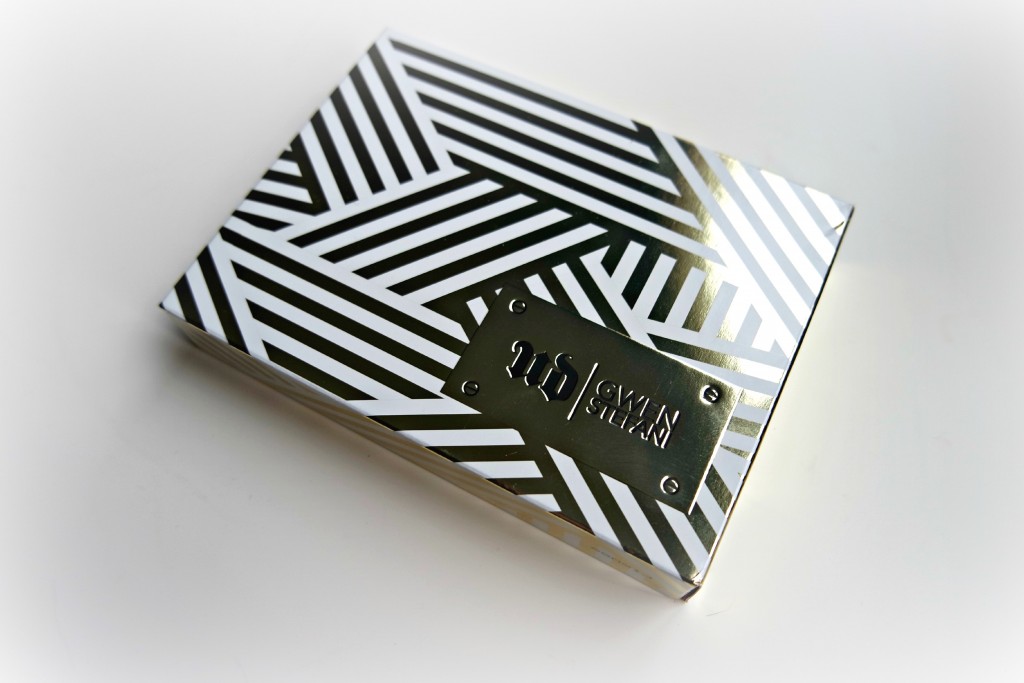 The box that contains the Urban Decay Gwen Stefani Eyeshadow Palette already looks very beautiful, it is white with metallic, champagne gold stripes. I would describe the design as a “braided zig-zag pattern”. It also has the UD Logo and the name of the palette in the right bottom corner, which looks like a metal plate. The back of the box has all the details of the shades in this palette. I’m already sold when I see packaging like this, seriously how awesome does this look!? 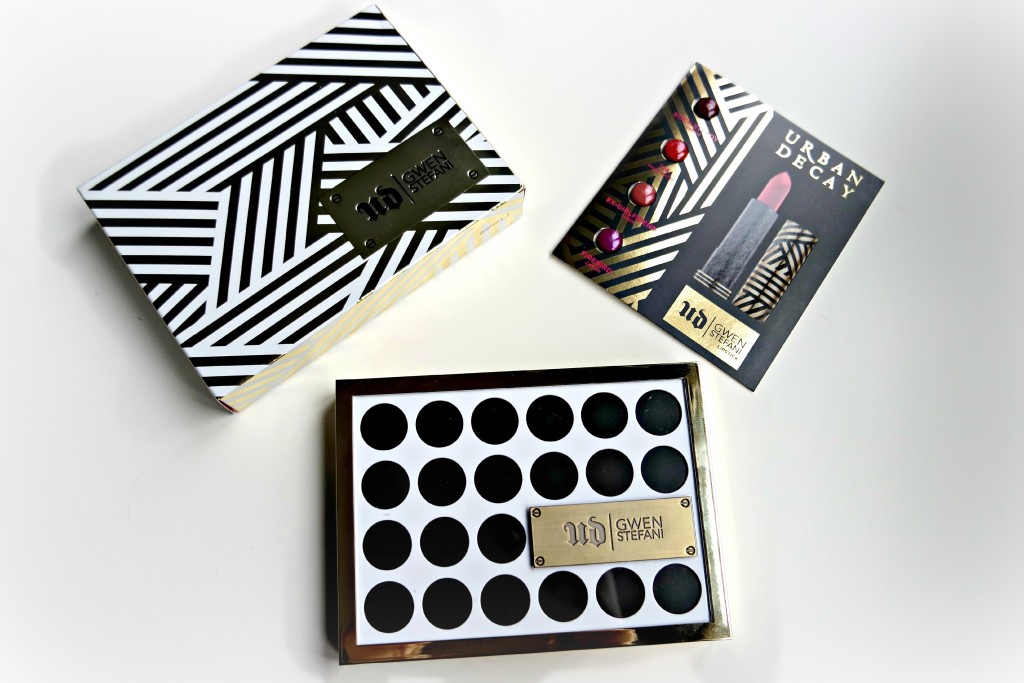 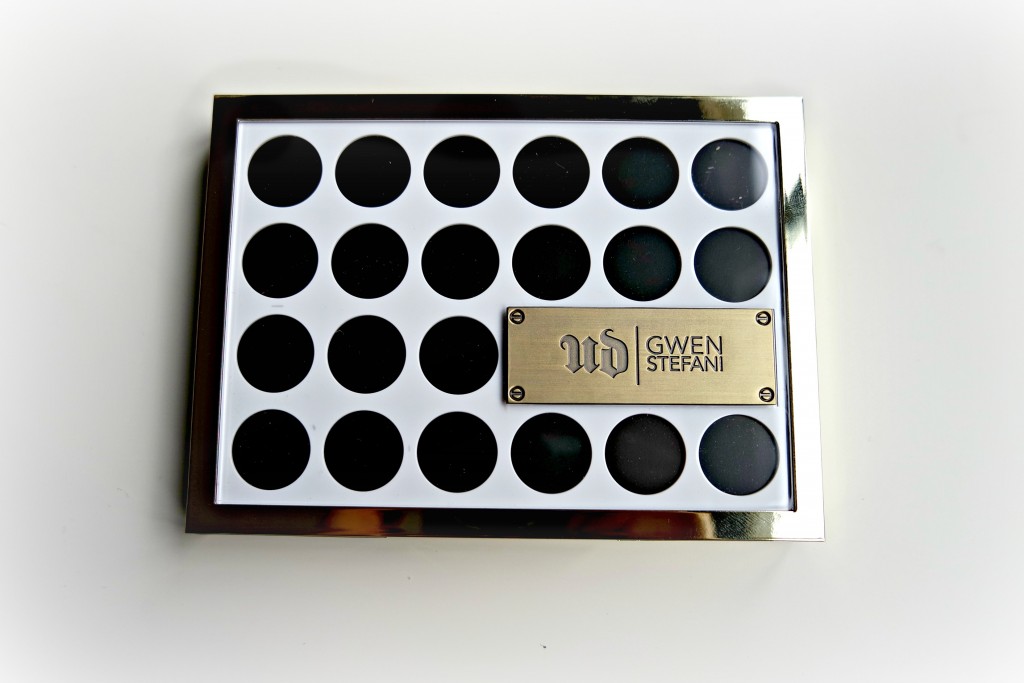 The palette casing is made of very stury plastic and has a magnetic closure. It has the same metallic looking plate with the Urban Decay logo and name. The front of the palette is white with circle cutouts, which shows a black background and has a champagne gold border. The design of the box and the palette are inspired by Gwen’s clothing brand L.A.M.B.

The palette contains 15 eyeshadow shades, 12 are exclusive to this palette and 3 are re-promotes. The top of the palette has a huge mirror and has “Magic’s in the Makeup” written in gold in the right bottom corner. 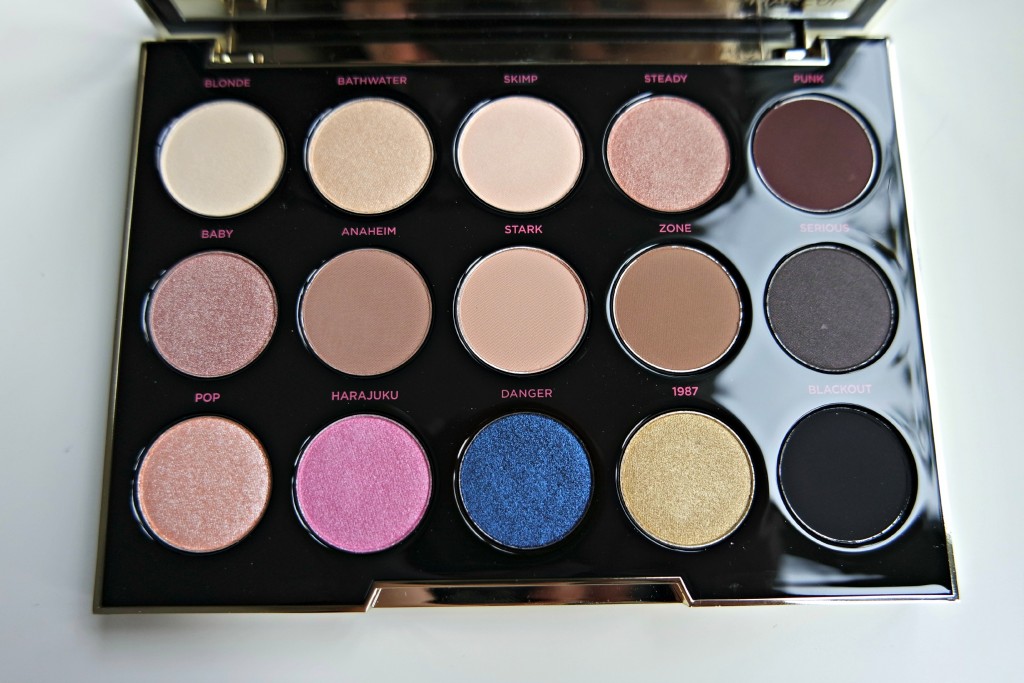 I can already tell you that all the eyeshadow shades are finely milled, nicely pigmented and very buttery, especially the satin/matte shades. Some of them do have a bit fallout issues, especially the glittery ones. Therefore, I would suggest to do your under-eye concealer after using this palette. All the eyeshadow shades that are exclusive to this palette are chosen and named by Gwen herself, which all have something to do with her life.

Here are the swatches of the first row: Blonde, a pale beige/pink iridescent shift (her hair shade). Bathwater, a pale beige with gold pearl (a song of No Doubt). Skimp, a pale nude satin(re-promote, one of Gwen’s favorite Urban Decay shades). Steady, a medium rose/metallic gold shift (after the No Doubt album Rock Steady). Punk, a reddish brown matte (the music genre that Gwen originally started with).

Swatches of the second row: Baby, a cool metallic rose (named after her clothing brand L.A.M.B.). Anaheim, a light taupe-brown matte (the place where Gwen grew up). Stark, a nude-pink matte (re-promote, another favorite Urban Decay shade of Gwen). Zone, a medium brown matte (named after her song, Danger Zone). Serious, a smoky gray w/iridescent floating pearl (also named after one of her songs).

Here are the swatches of the 3rd and last row of the palette: Pop, a pale coral w/iridescent sparkle (the music genre that Gwen’s currently in). Harajuku, a metallic blue-pink w/iridescent micro-shimmer (one of her style inspirations). Danger a deep metallic royal blue w/blue micro-sparkle (because we all love a little bit of “danger”). 1987, a bright metallic yellow-gold (the year that the band No Doubt was founded). Blackout, a blackest black matte (Gwen’s favorite black shade). 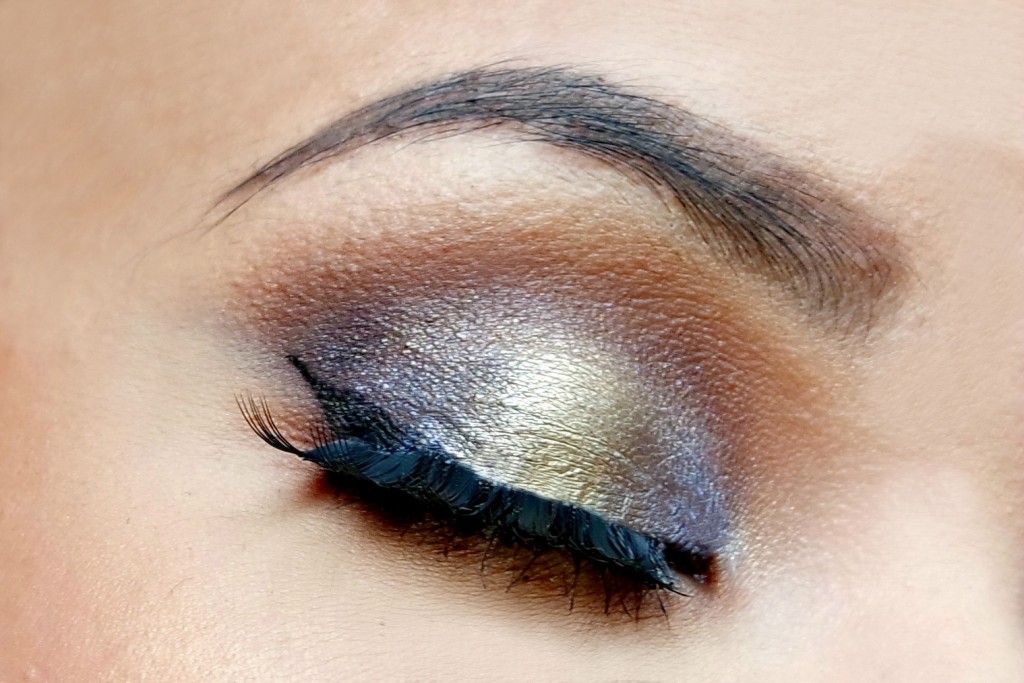 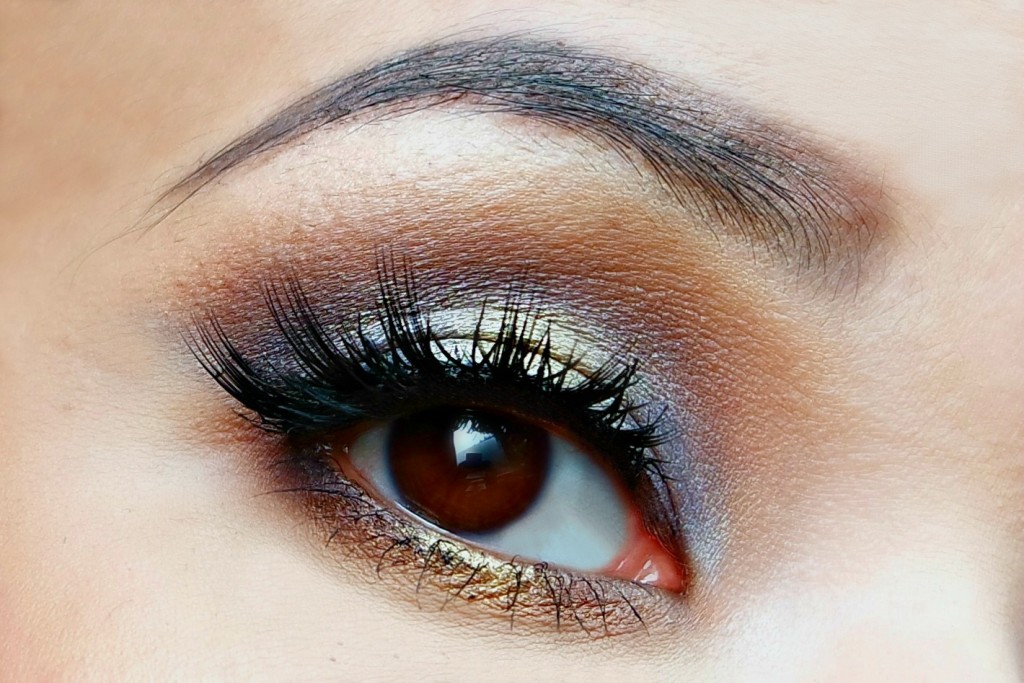 I’ve created this eyelook using a few of the shades in the Urban Decay Gwen Stefani Eyeshadow Palette. The shades that I used are Stark (all over the lid), Blonde (browbone and inner corner highlight),  Anaheim/Zone (crease and bottom lashline/lid), Punk (to deepen the crease, focusing on the outer V), Blackout (to deepen the outer V even more) Danger (outer and inner 3rd parts of the upper lid) and 1987 (in the middle of the upper and bottom lid, blending into the other shades). 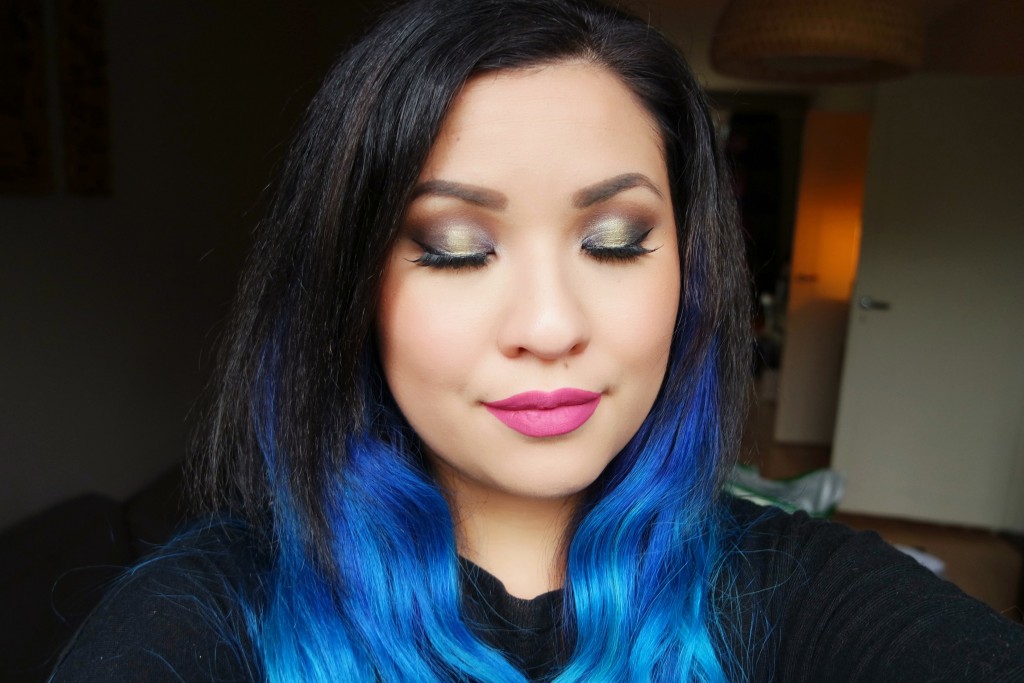 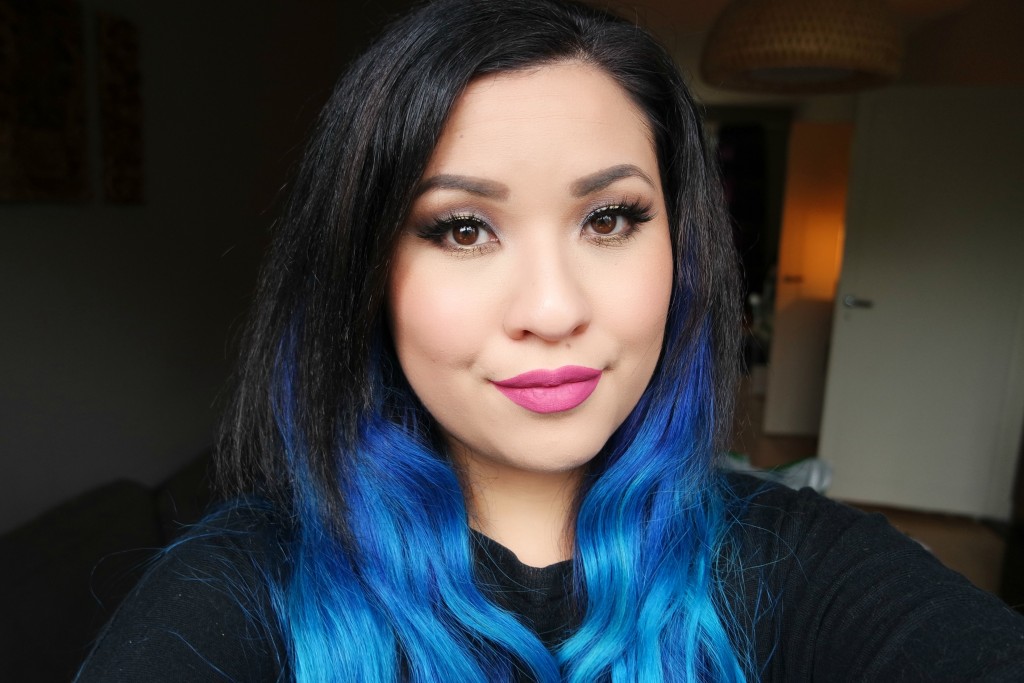 Like I’m used to with other Urban Decay eyeshadows, all shades that I used are vibrant and nicely blendable on the lids. I love how the shades blend nicely into each other. I personally like that there are a lot of neutral shades with only a few bright ones. I also think this palette is very “Gwen”, since she always loves to do neutral eyes and a bold lip. 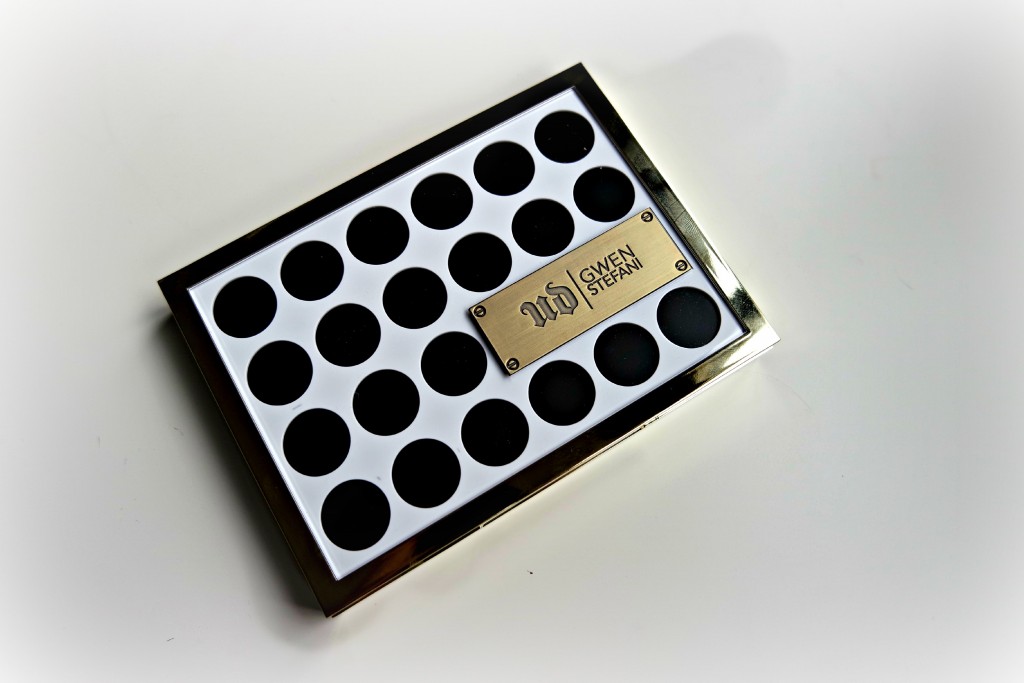 Even though I already have many eyeshadow palettes that have similar neutral shades like these, I still really love this one. Not only are all the eyeshadows are of high quality, the palette itself is a joy to look at. You can see that there is a lot of thought and hard work in this palette, which I can always appreciate.

I’m not sure how this palette would work out on deeper skin tones, since there are a lot of pale eyeshadow shades in here. However, if you’re a neutral eyeshadow lover and want to play around with a bit more colors, you will definitely like this eyeshadow palette.

Do you own this palette or are you planning to purchase this for the holidays?