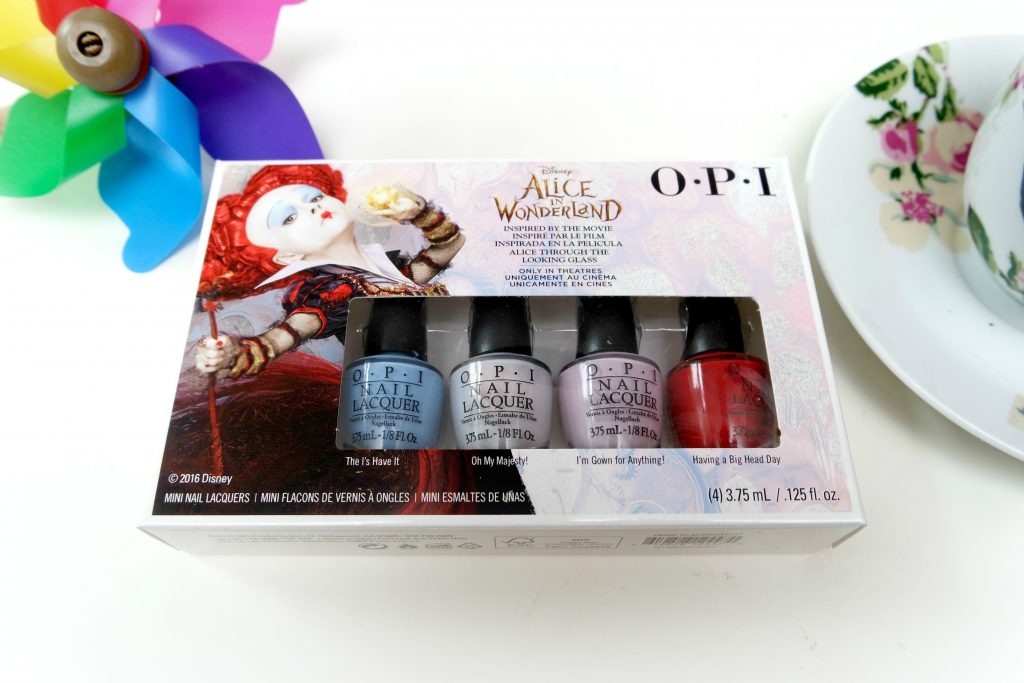 There’s a new Alice in Wonderland movie coming up which also means that in the beauty world, brands are creating products inspired by the movie. OPI is one of those brands and has released the Brights – Alice Through the Looking Glass collection. This collection consists on nine nail polishes and the OPI Royal Court of Color Mini Set, a set of four miniature nail polishes inspired by the movie. 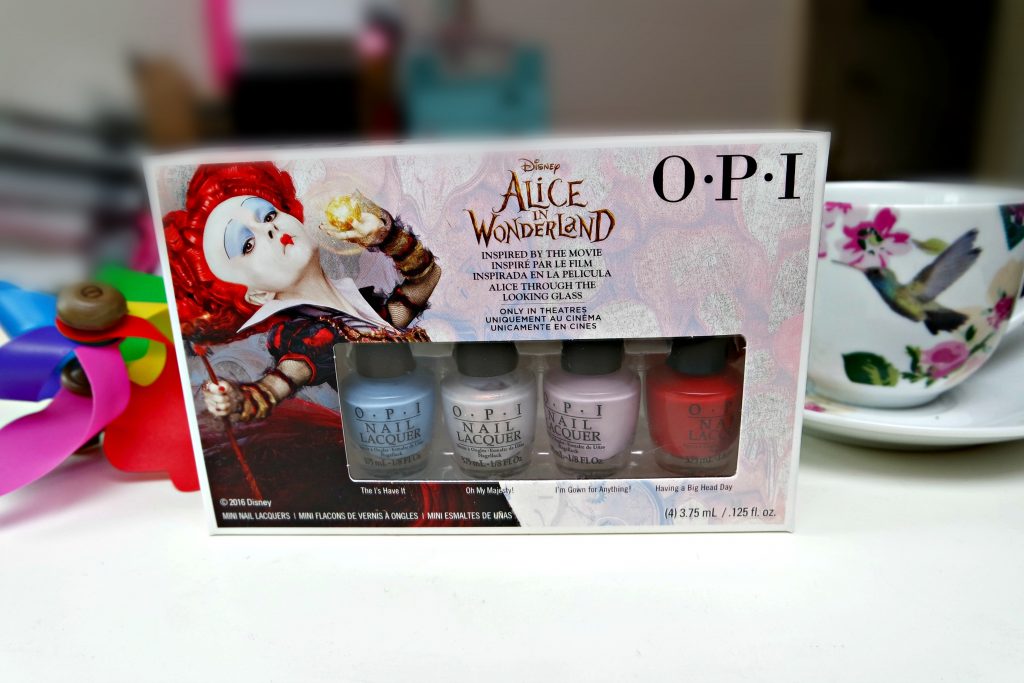 The box art of the OPI Royal Court of Color Mini Set shows an image of The Red Queen, portrayed by Helena Bonham Carter and the Disney Alice in Wonderland Logo. 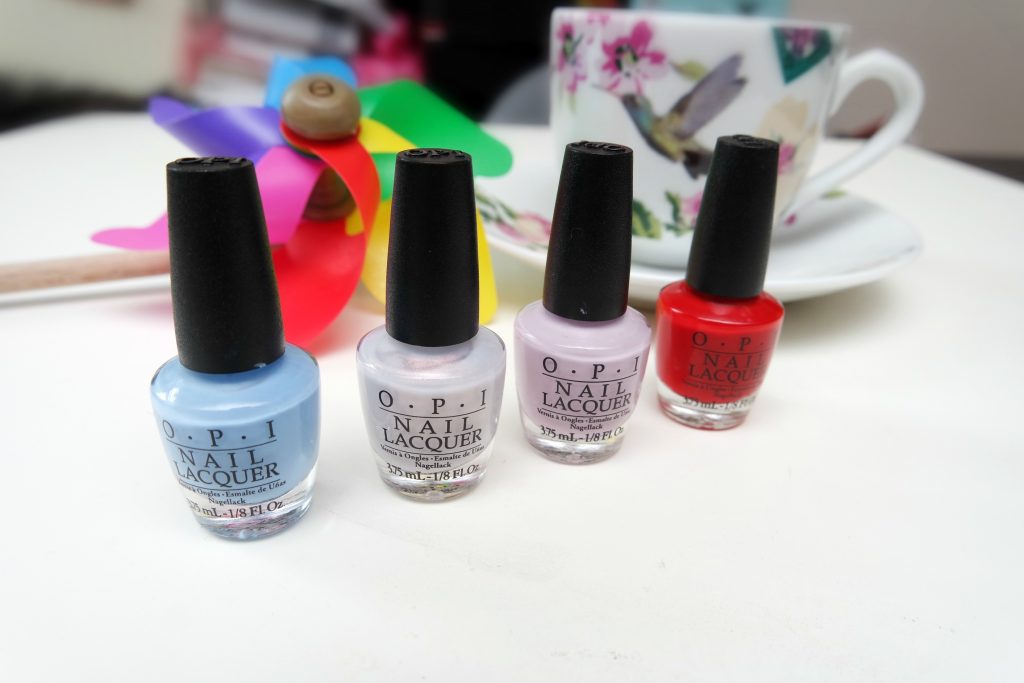 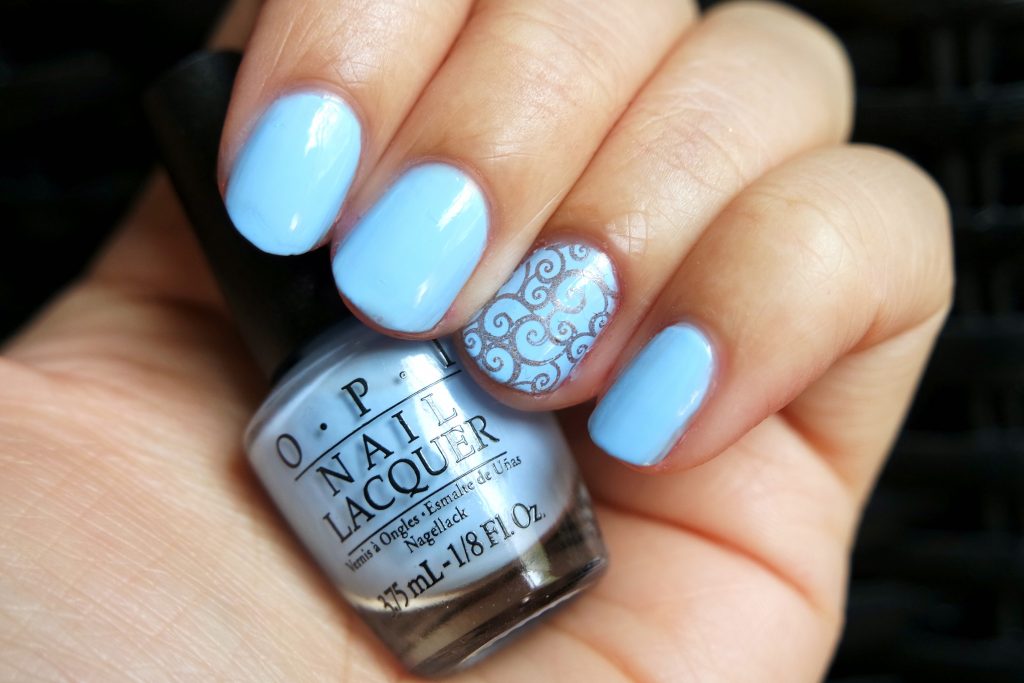 The I’s Have It is a creamy light powder blue shade. The formula of this polish was  thin but unfortunately, very patchy. It was opaque using three coats but you could still see the streaky-ness after the polish has dried. I do love the shade though. 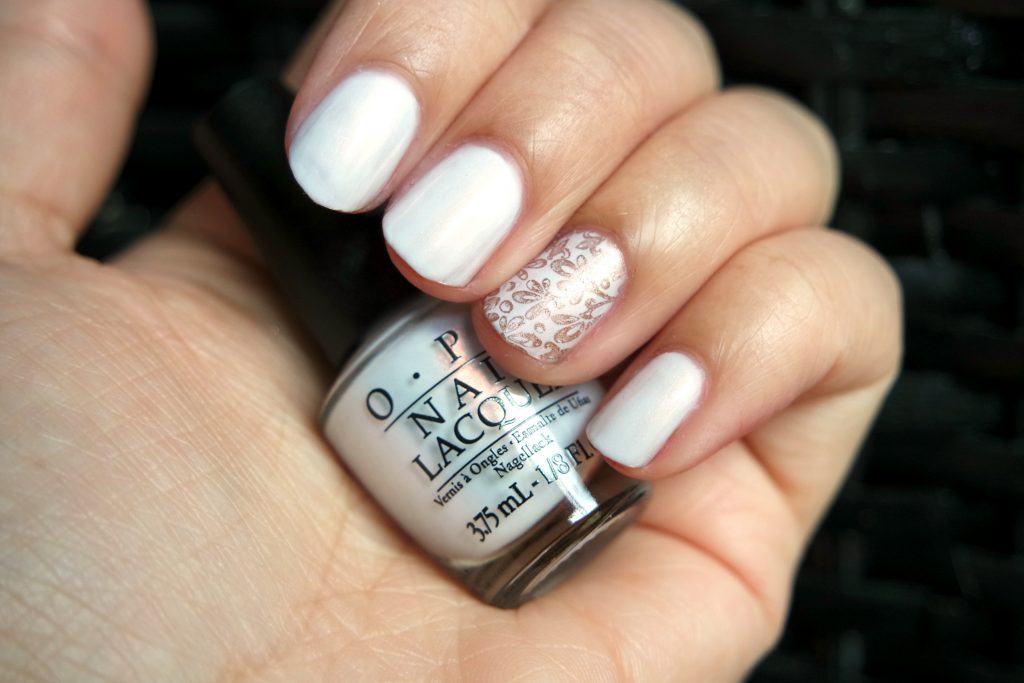 Oh My Majesty! is described as a pearly alabaster. I have never heard of the shade alabaster so I had to look it up and I would describe it as an off-white (on the pinker side). The shade is somewhat special, I thought I would hate it and it would look “outdated” because of the pearl finish, but I actually think it looks really nice! It doesn’t have a frosty look but more a pearly shimmery finish with a pink shine. The formula was thin and I needed two coats for full opacity.

OPI – I’m Gown for Anything! 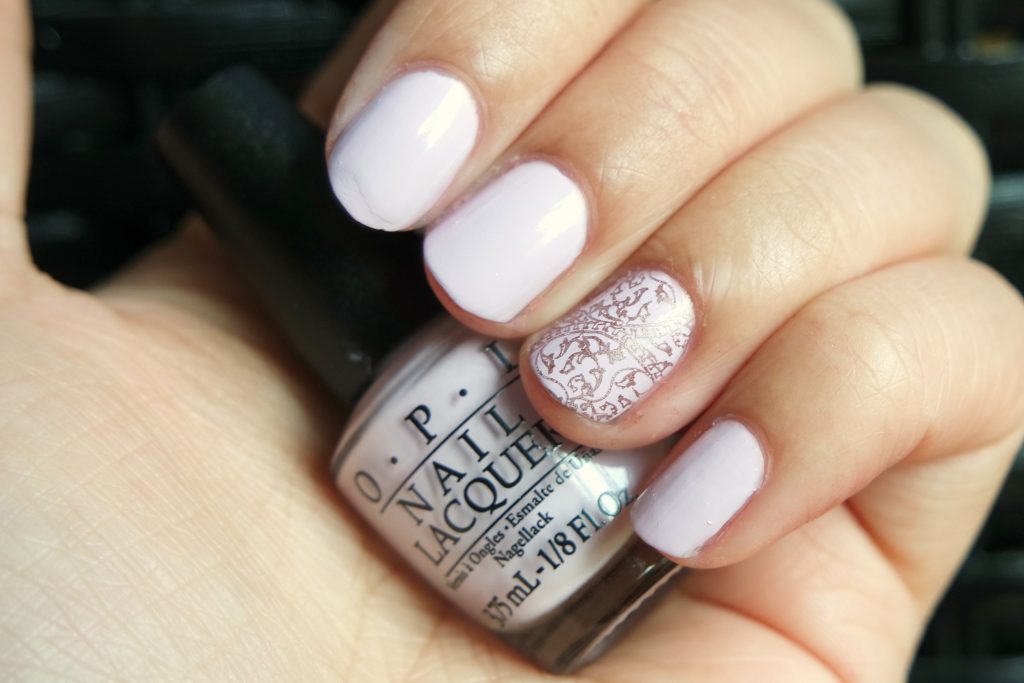 I’m Gown for Anything! is a creamy lilac shade. I thought this shade would perform the same as the blue shade, but this one is actually very nice! The formula is. thin not patchy at all and I needed two coats full opacity.

OPI – Having a Big Head Day 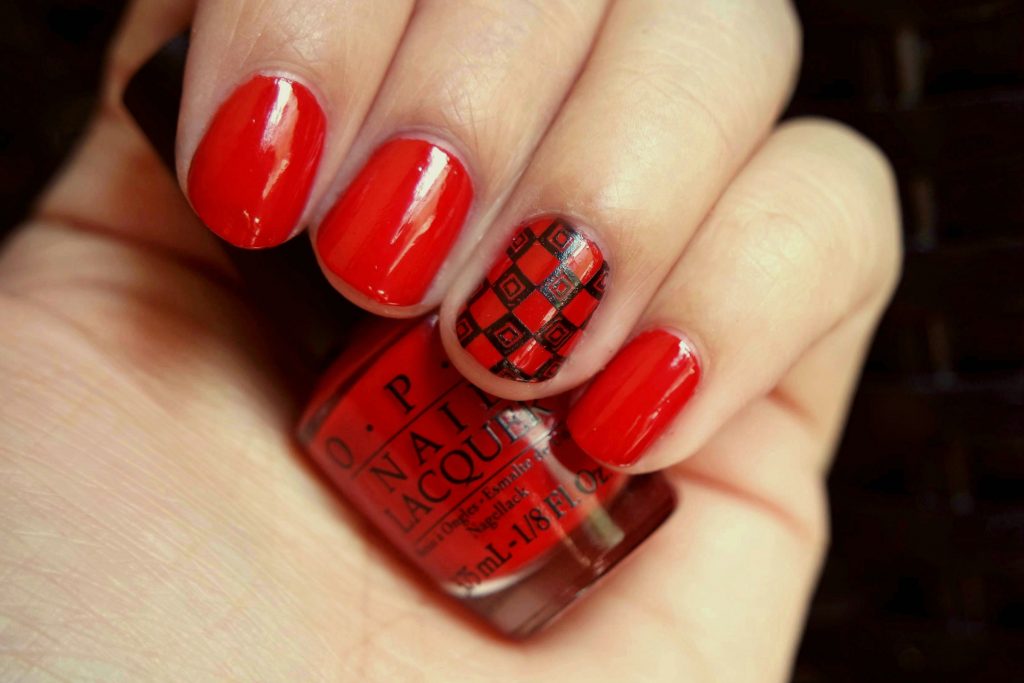 Having a Big Head Day is a bright, hot red shade. It’s the perfect red but unfortunately not that special. Red nail polishes usually have a good formula, since reds are very pigmented anyways. This formula is very runny, so be careful when painting near your cuticles. I needed two coats for full opacity. 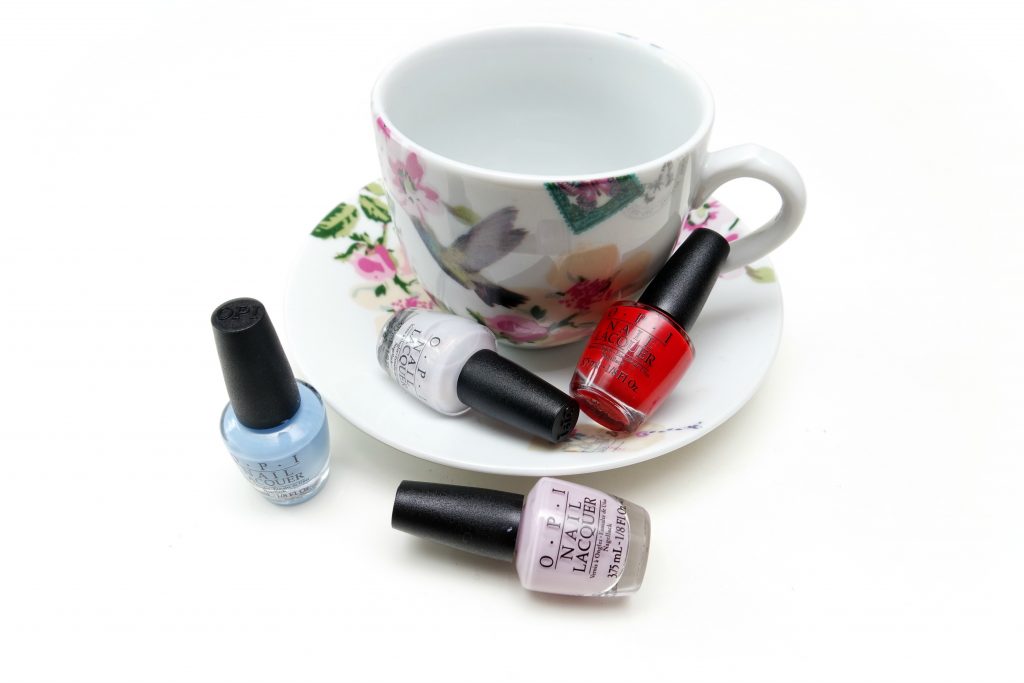 Since I’m a fan of pastel polishes, I liked the OPI Royal Court of Color Mini Set but the shades aren’t that special. OPI also just came out with the Softshades 2016 collection, so a lot of shades are similar and a red nail polish is also not that special. The only more unique shade in this set is Oh My Majesty! If you already own the OPI Softshades Pastels Mini Set, you might want to skip this one but I have to say I like the formulas of this set better. 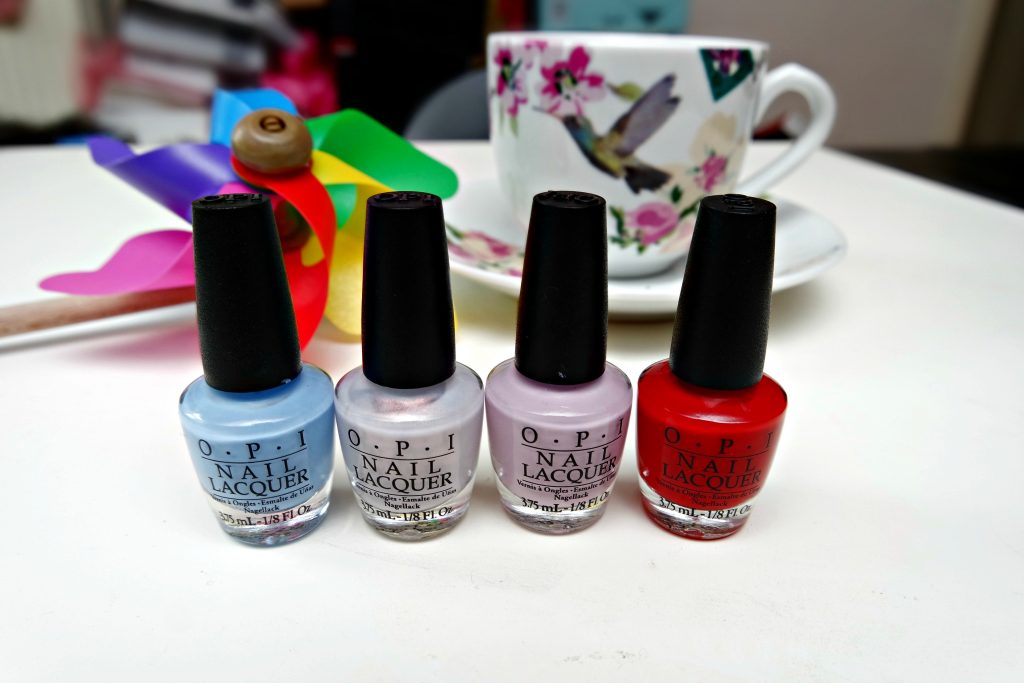 My favorite shade is I’m Gown for Anything!. The OPI Royal Court of Color mini nail lacquers set is available for € 22,95 Euro at Douglas.nl and the Douglas stores.

Which shade is your favorite of this set?