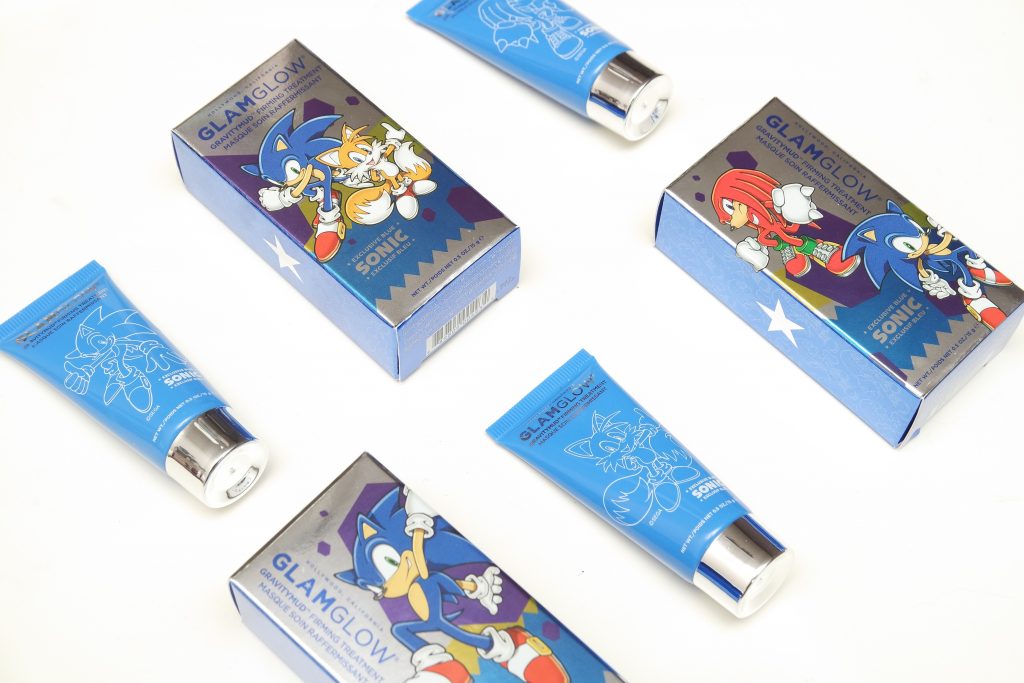 A combination of Videogames and Beauty products is something that you don’t see often and when it does, it’s created by an Indie brand. However, GLAMGLOW has done something magical and teamed up with Sega to create the GLAMGLOW Gravitymud Sonic Blue Collectors Edition masks, featuring Sonic The Hedgehog and his friends on the packaging. I’m going to tell you all about this Limited Edition collectors item in this post. 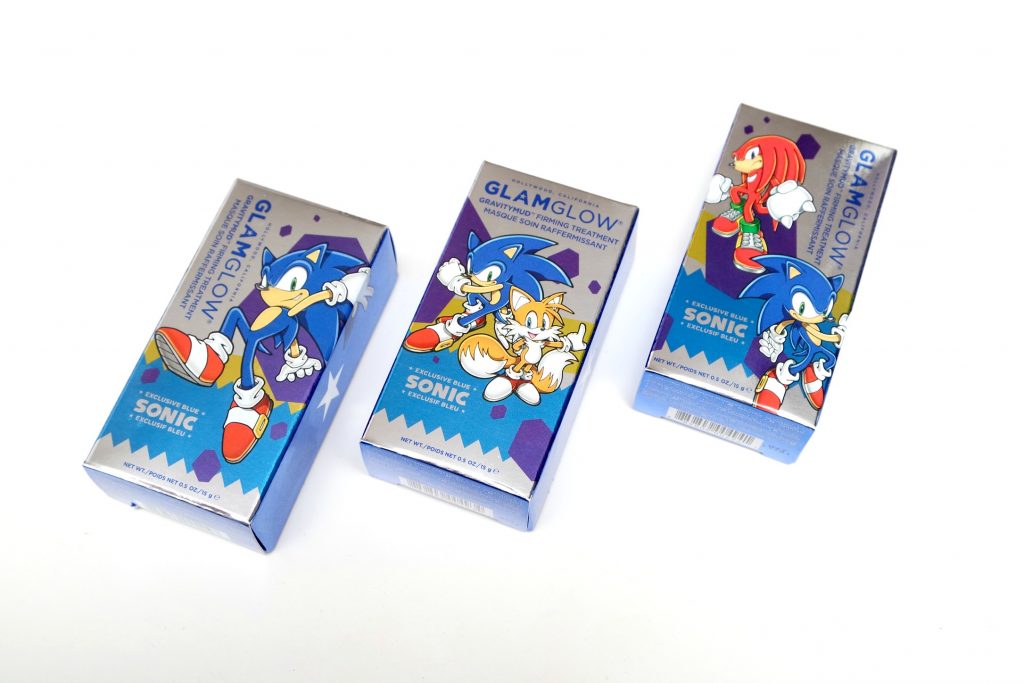 In case you have never heard of GLAMGLOW, it’s a very popular face mask brand based in the USA founded in 2010 by Glenn and Shannon Dellimore, exclusively for backstage and professional use in Hollywood’s Entertainment industries. You can imagine that many famous celebrities have used the GLAMGLOW products, which is also why I love the idea that such a huge brand has created a collectors edition inspired by a Videogame.

The GLAMGLOW Gravitymud Sonic Blue Collectors Edition was originally launched in a GLAMGLOW jar, which was very hard to come by and from what I know, was only available in the U.S.. The Collectors Edition has a different packaging and is available for a limited time at all official GLAMGLOW sellers. This edition consists of three products in total. The product itself is the same for all of them but each have different packaging, which features either Sonic, Tails or Knuckles on the packaging. 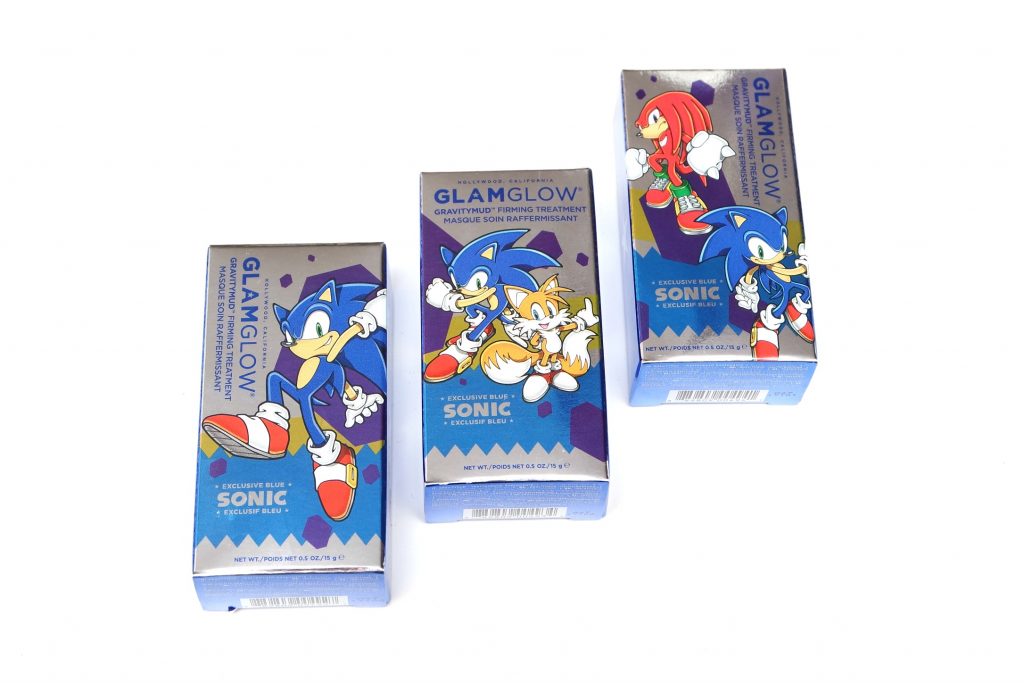 Sonic The Hedgehog is a Videogame first released in 1991 for the Sega Genesis console by Sega. The videogame is named after the protagonist, Sonic The Hedgehog, a blue hedgehog that can  run extremely fast. His friend Tails, a two-tailed fox joined him in the game’s 1992 sequel, Sonic The Hedgehog 2. His other friend Knuckles (which was his foe at first), a red echidna debuted in 1993 in the third game, Sonic the Hedgehog 3.

I have very fond memories playing Sonic the Hedgehog 2 together with my cousin, which owned a Sega Genesis. I always playing as Tails, because I love foxes. I haven’t played any other Sonic games though, other than playing with him as a character in Super Smash Bros. Brawl. Either way, he’s a iconic game character that probably everyone has seen at least once in their lives. 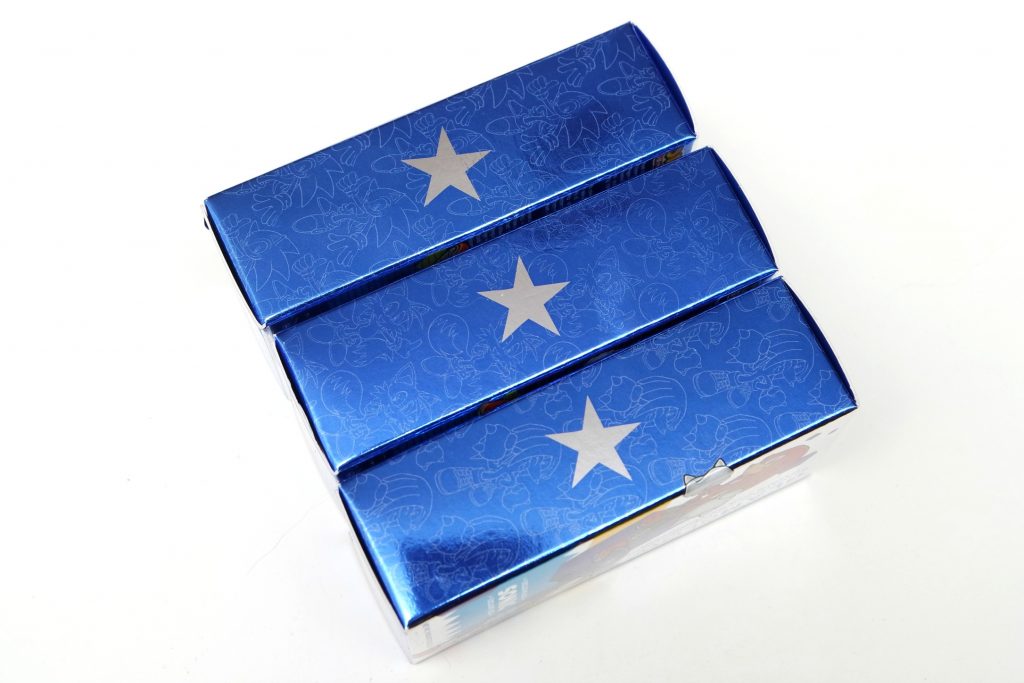 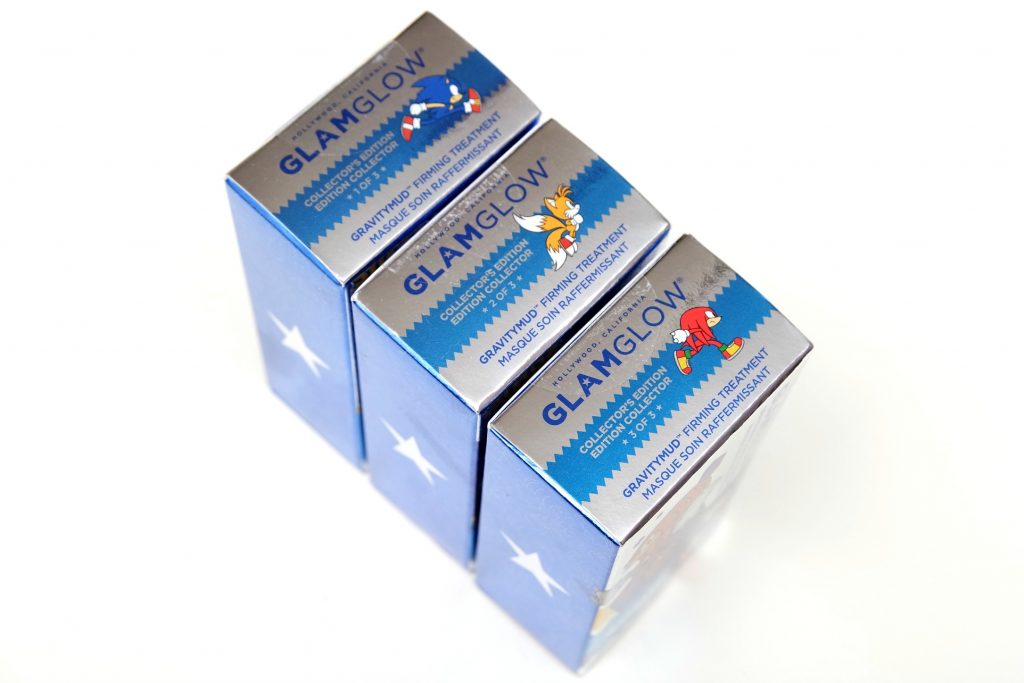 The packaging of the GLAMGLOW Gravitymud Sonic Blue Collectors Edition is absolutely adorable. I’m a huge sucker for things like this, which is why I bought all three of them. The cardboard box features artwork from each character individually and artwork together with Sonic (except for Sonic himself ofcourse) in front of the packaging. 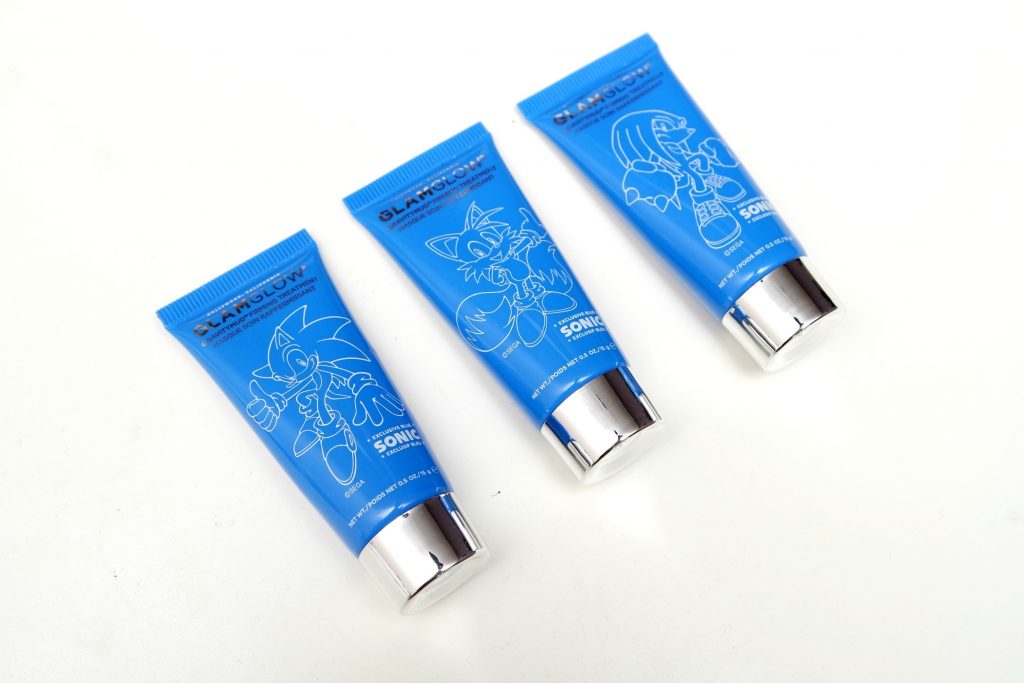 The tube itself is made from a non-transparant blue plastic with white and silver details that features each individual character. I’m a huge sucker for things like this, which is why I bought all three of them. The cardboard box features artwork from each character individually and artwork together with Sonic (except for Sonic himself ofcourse) in front of the packaging. Each tube contains 15 grams of product in total. A regular, fullsize GLAMGLOW Gravitymud Firming Treatment jar contains 40 grams. With the amount that was inside the tube, I personally could use the mask two times. There is still a bit of leftover in there, which I could get by cutting the tube open or if I would really try and squeeze hard but it would probably still not be enough to do the entire face. 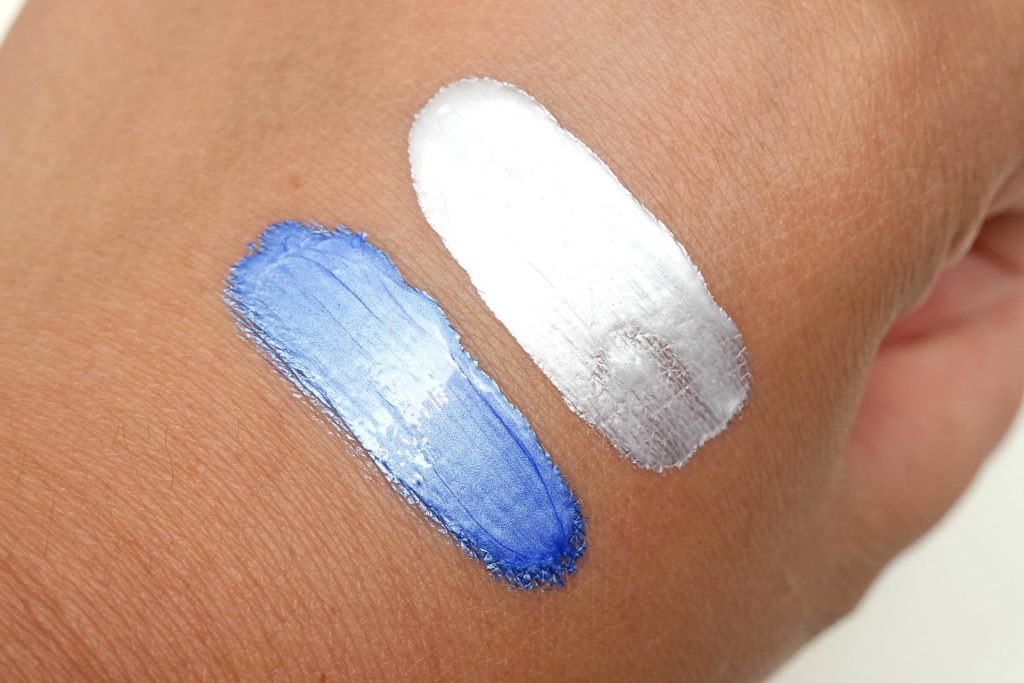 Here’s a swatch of the GLAMGLOW Gravitymud Sonic Blue Collectors Edition next to the regular Gravitymud Firming Treatment. There’s no difference between them except for the blue shade. The mask is thick and feels very goopy, which is easier to apply with a brush that comes with the fullsized version but with the squeezable tube, you probably will have to use your fingers or a flat foundation brush. The scent of the mask is really delicious, which reminds me of a Piña Colada and is very strongly present, so keep that in mind if you’re someone who is sensitive to strong scents. 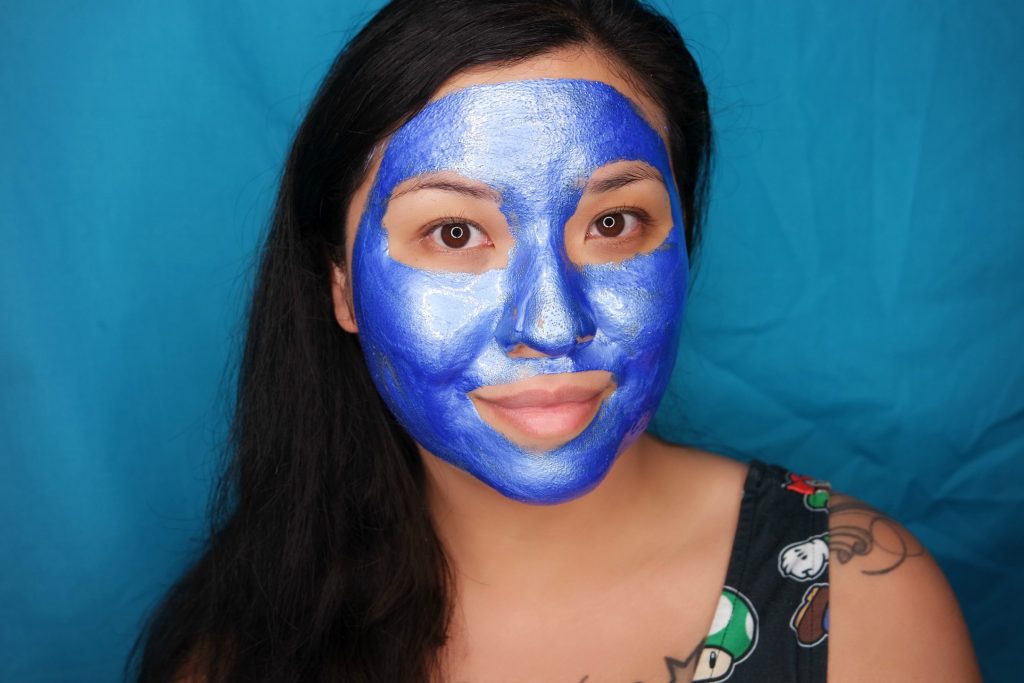 The GLAMGLOW Gravitymud Firming Treatment is a peel-off mask which according to the brand, is supposed to instantly tighten and firm, containing mega-targeted ingredients like TEAOXI™ Marshmallow and Licorice Leaf that work together to help skin’s contours look and feel more defined.

To use the mask, shake and squeeze the tube before use. Then, apply a generous and even layer on the skin, avoiding the eyebrows and hairline. Leave on for 20-30 minutes until the mask has dried and gently peel off. You can rinse off the excess with warm water. 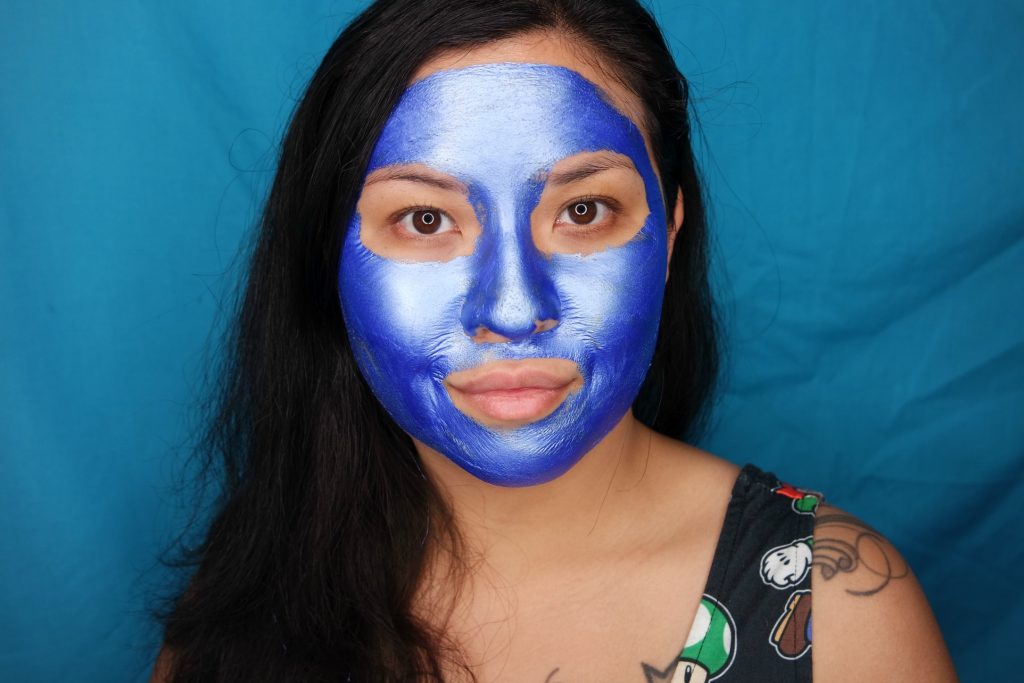 You can definitely feel the tightening effect of the mask when it is drying. The mask mostly felt comfortable during use, very cooling/refreshing and a slight tingly sensation while the mask is slowly tightening, except on my sensitive cheek area. There, I felt a subtle burning/irritating sensation at the beginning, but completely disappeared once the mask was dried. 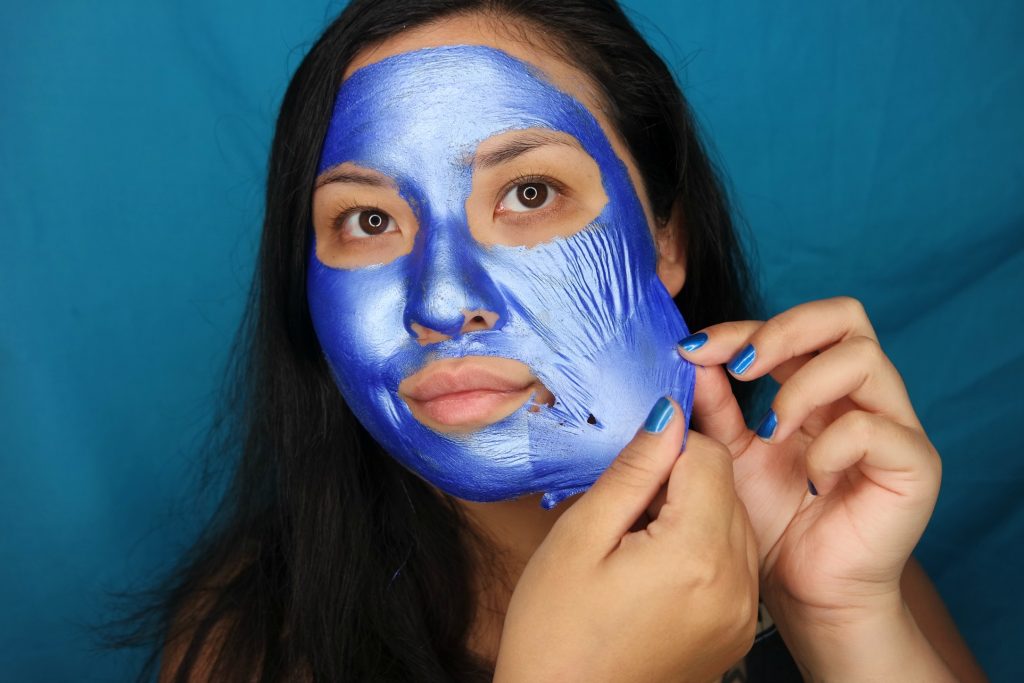 The mask changes from a sticky, creamy substance to a solid, elastic mask with a blue chrome look. You then can start peeling off the edges of the mask until it’s completely removed. I found the removal process painless and easy. The most important thing is to avoid any thick hairs like on the brow and head area, which you can still easily remove by a warm, damp cloth. 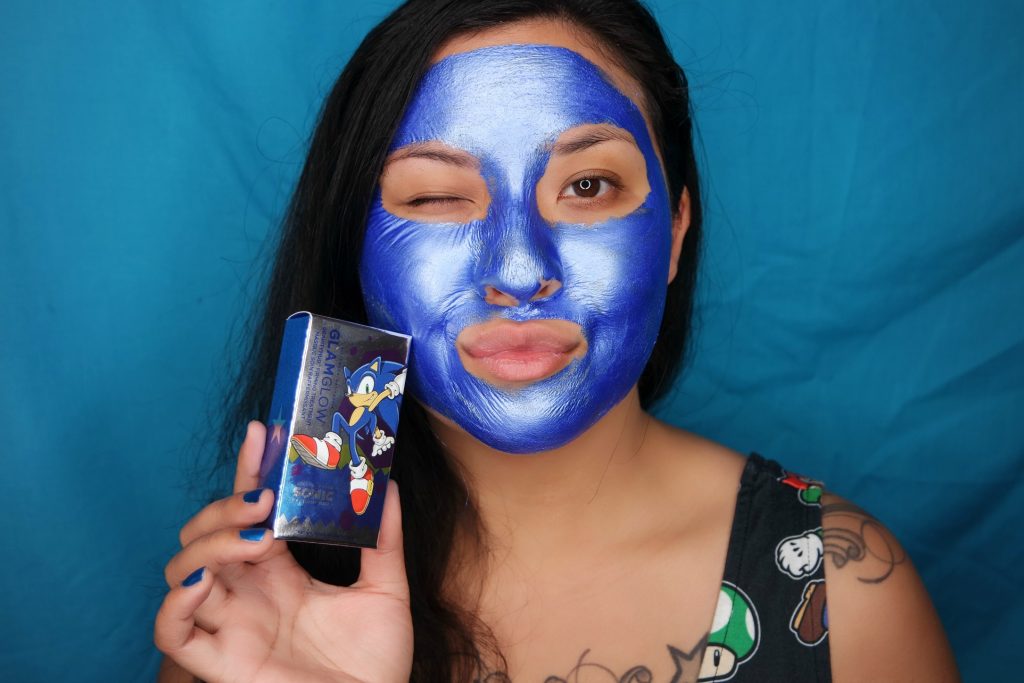 My skin feels really smooth and moisturized afterwards, my pores also seem to be a bit smaller after use, but mostly, I don’t have problems with needing to tighten and firm my skin so it doesn’t have any huge beneficial properties for me other than to smooth out my skin and that it’s really fun to use.

I also wouldn’t recommend to buy this version, only if you’re a fan of the packaging like I am or if you’re just really into the fact that it’s blue instead of silver. The reason why I don’t recommend it is because you can actually purchase a regular GLAMGLOW Gravitymud Firming Treatment, with the same amount of product (15 grams) for €15,30 Euro, which is about five Euro’s cheaper than this version. I do hope that GLAMGLOW will continue to do fun and nerdy Gravitymud Collectors Edition versions. I’ve already seen that they are planning to launch a Green and Gold version in collaboration with the upcoming Power Rangers Movie in Fall so I’m already hoping to a Pink Princess Peach version for Valentines Day next year! 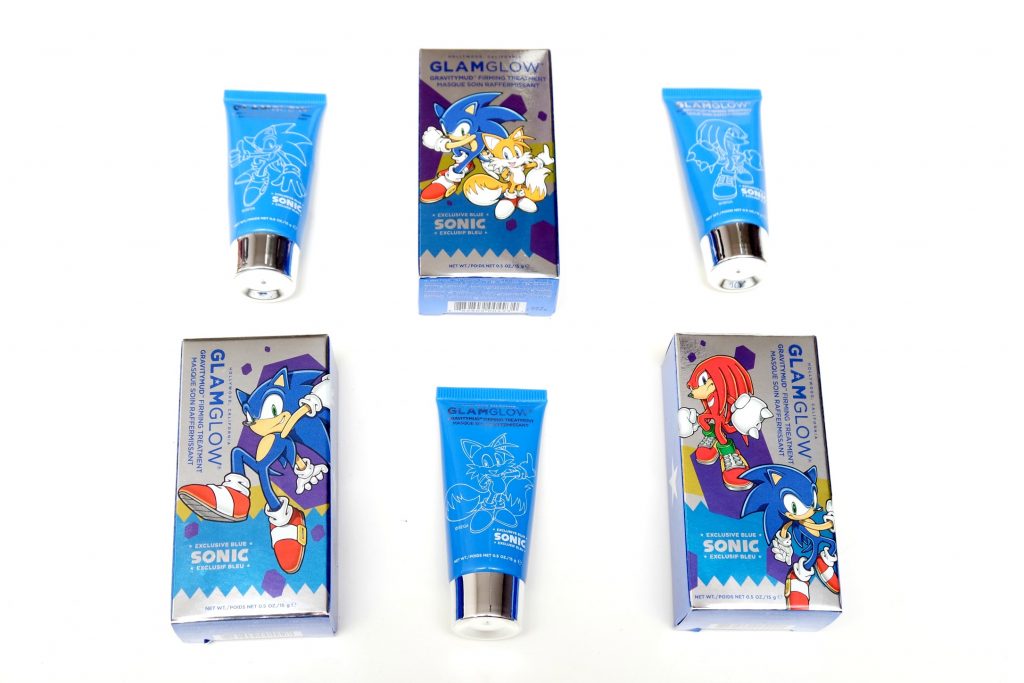 Have you ever a videogame that features Sonic The Hedgehog?